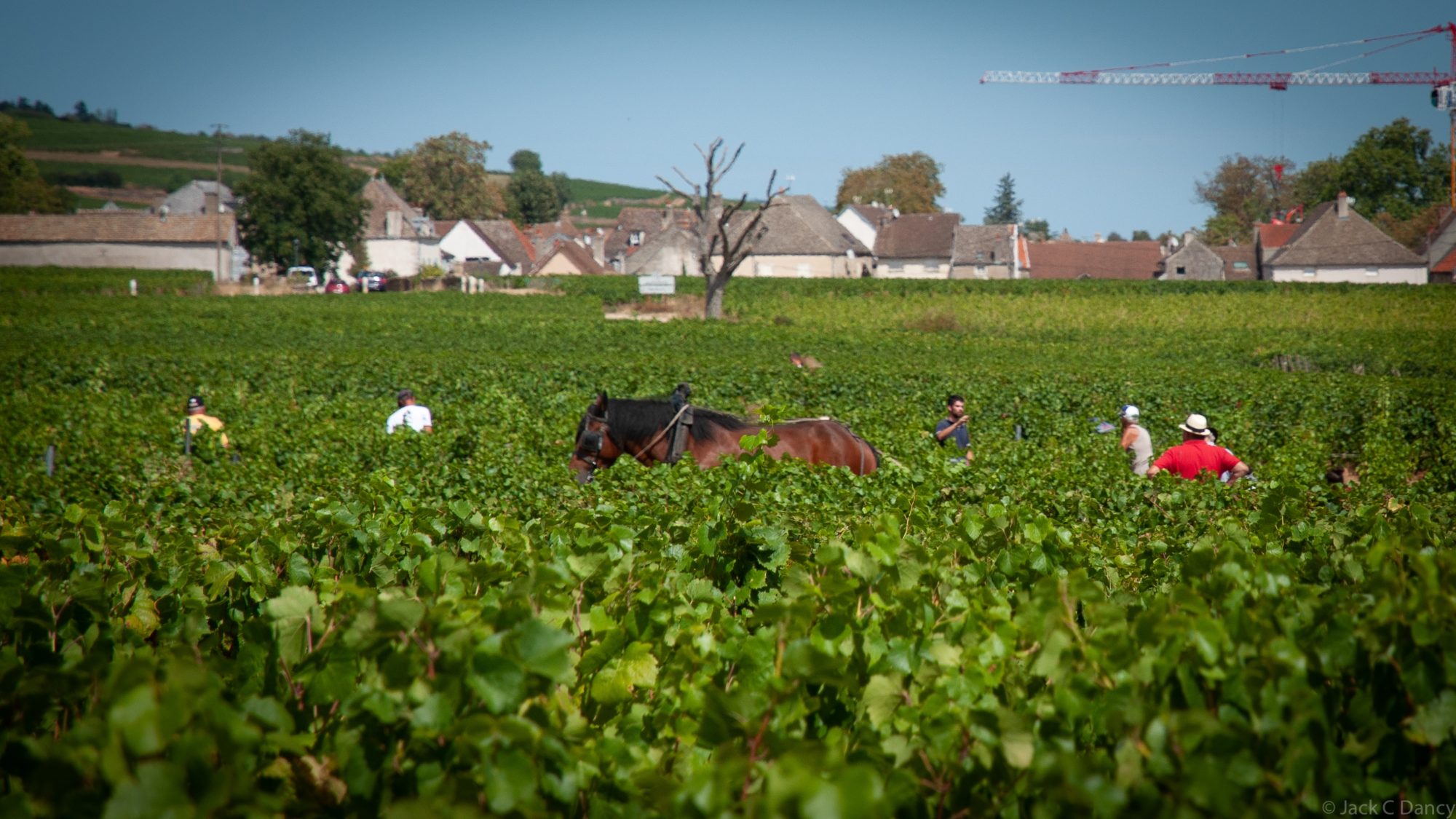 Snapshot of a peaceful harvest scene.... but for the bigger picture, read the article. Photo: Jack Dancy 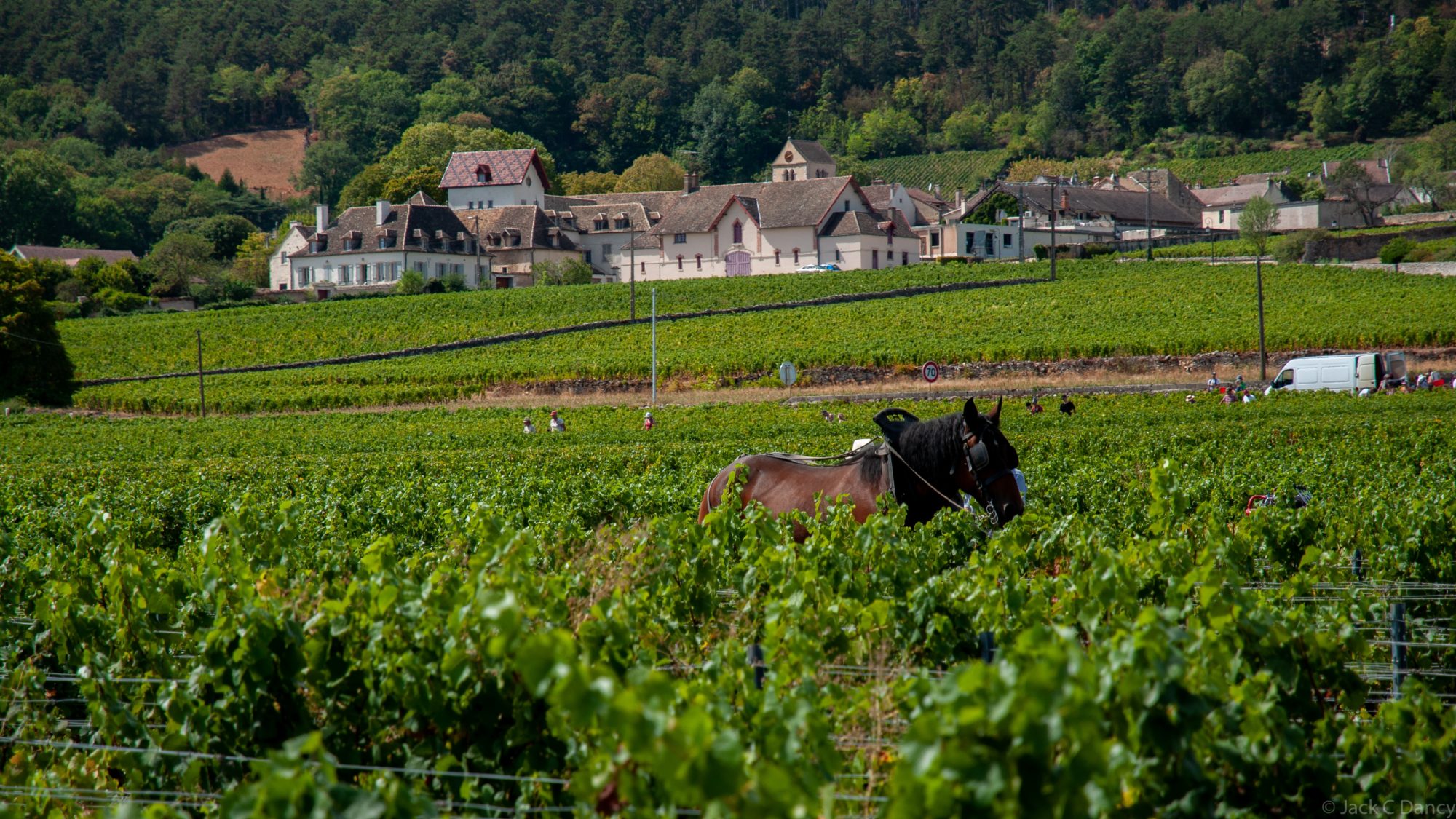 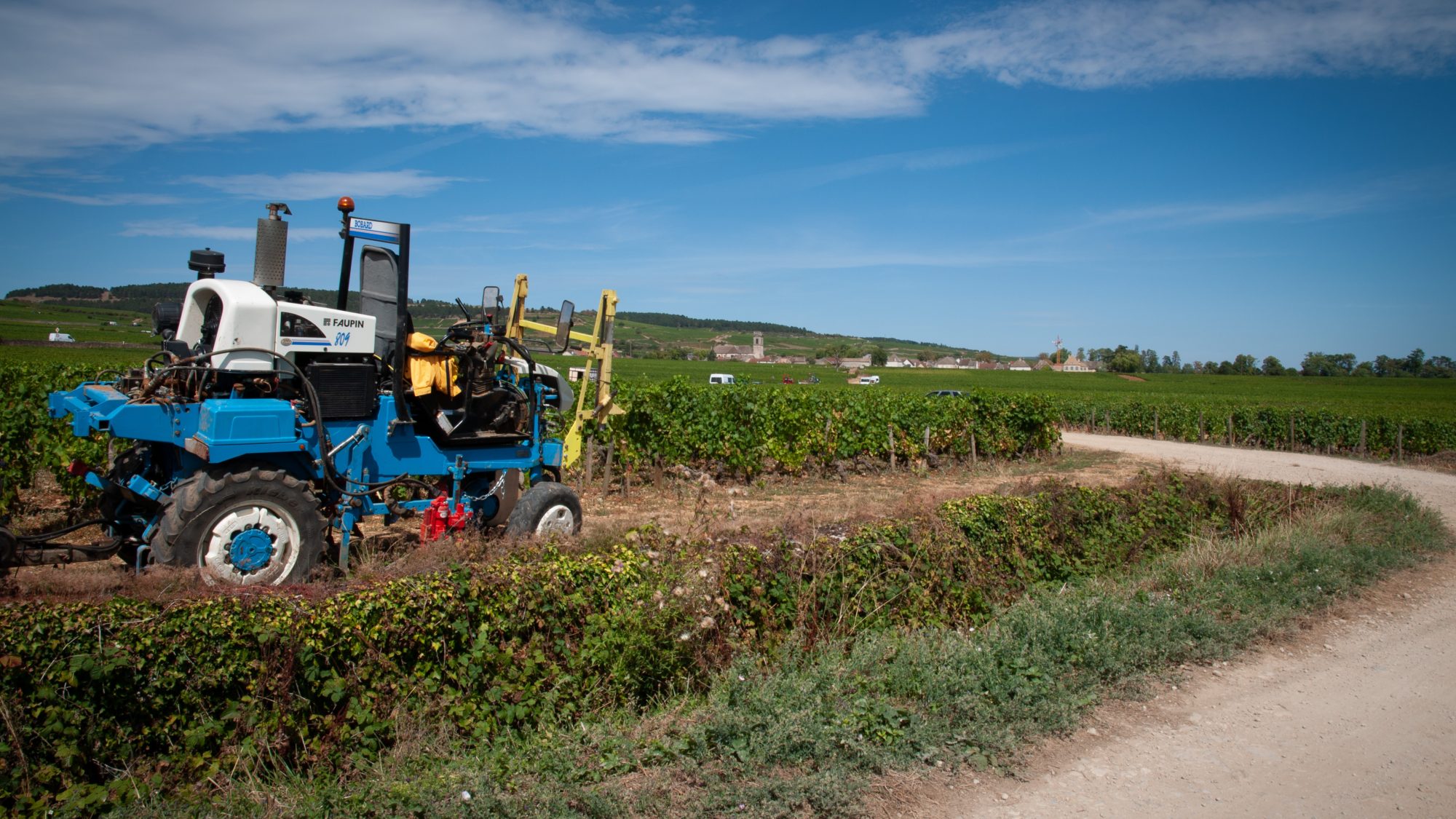 The cart horse of modern wine-making: the 'enjambeur' which straddles the vines and performs multiple viticultural tasks as the year goes by. Photo: Jack Dancy 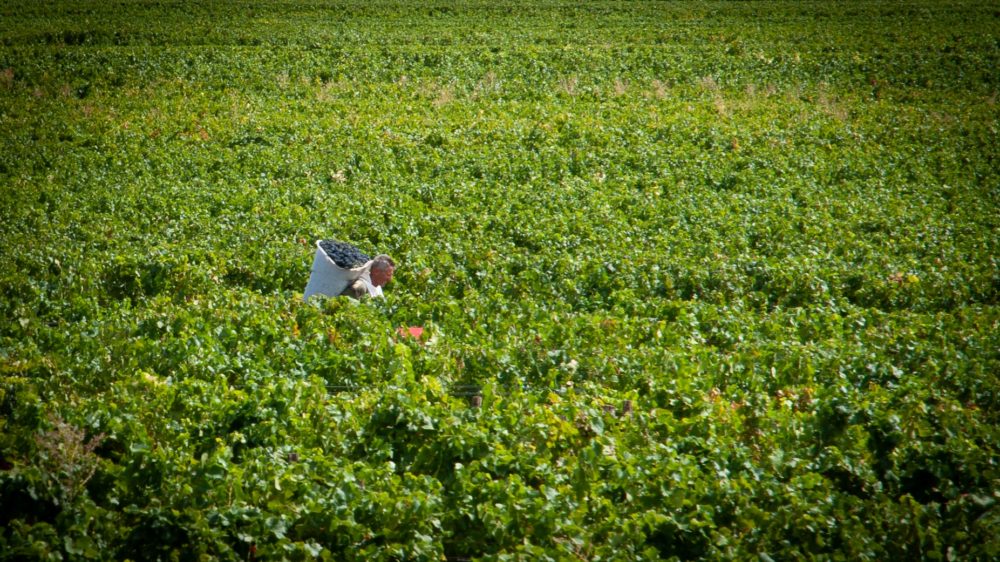 Le 'Porteur' is the mule who carries the grapes from the pickers to the awaiting tractor, to be transported to the winery for sorting. Back-breaking work indeed. Photo: Jack Dancy 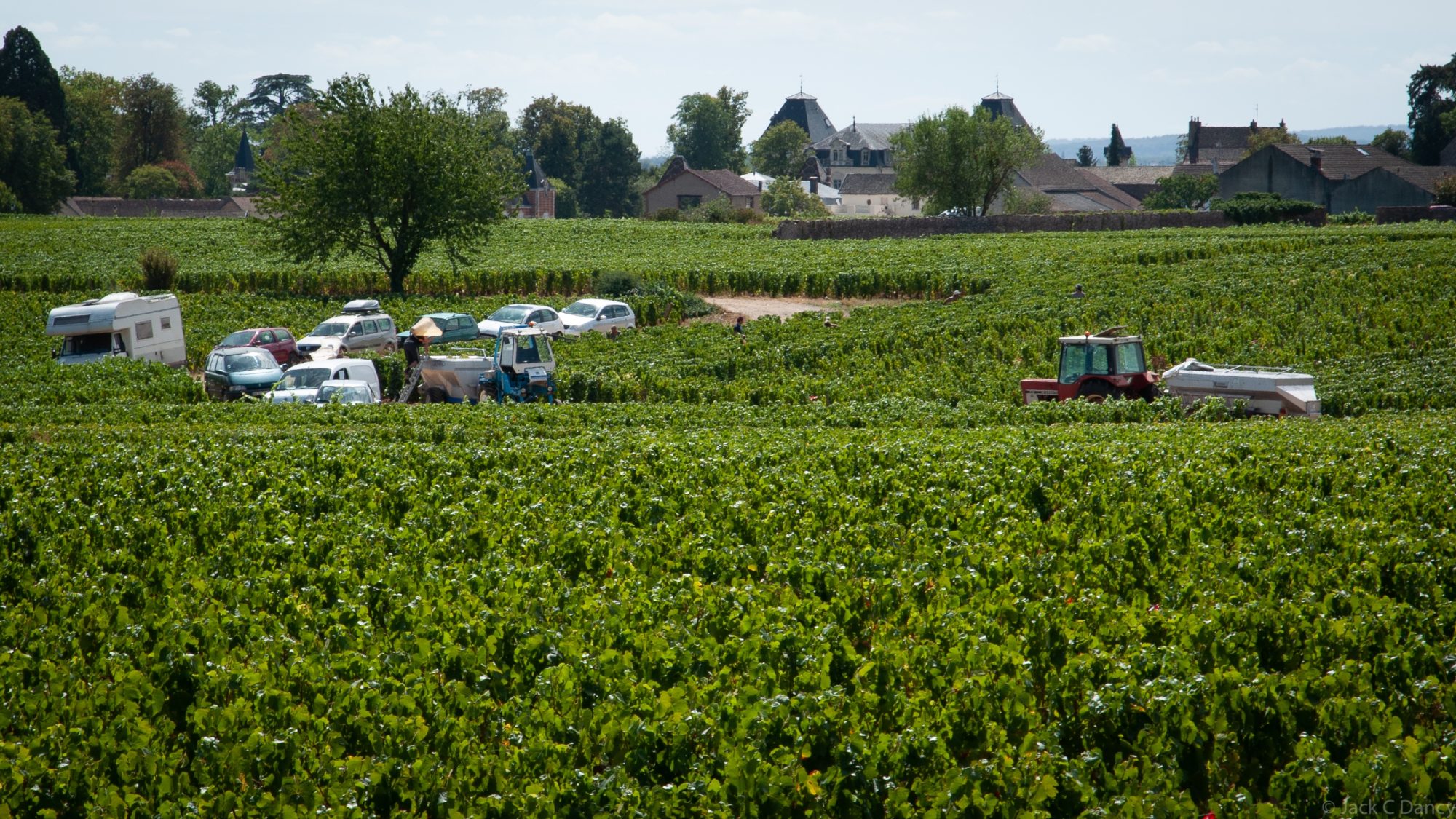 More common than cart horses are white vans and the runabouts of the pickers who have to zip from vineyard to vineyard as the harvest progresses. Photo: Jack Dancy 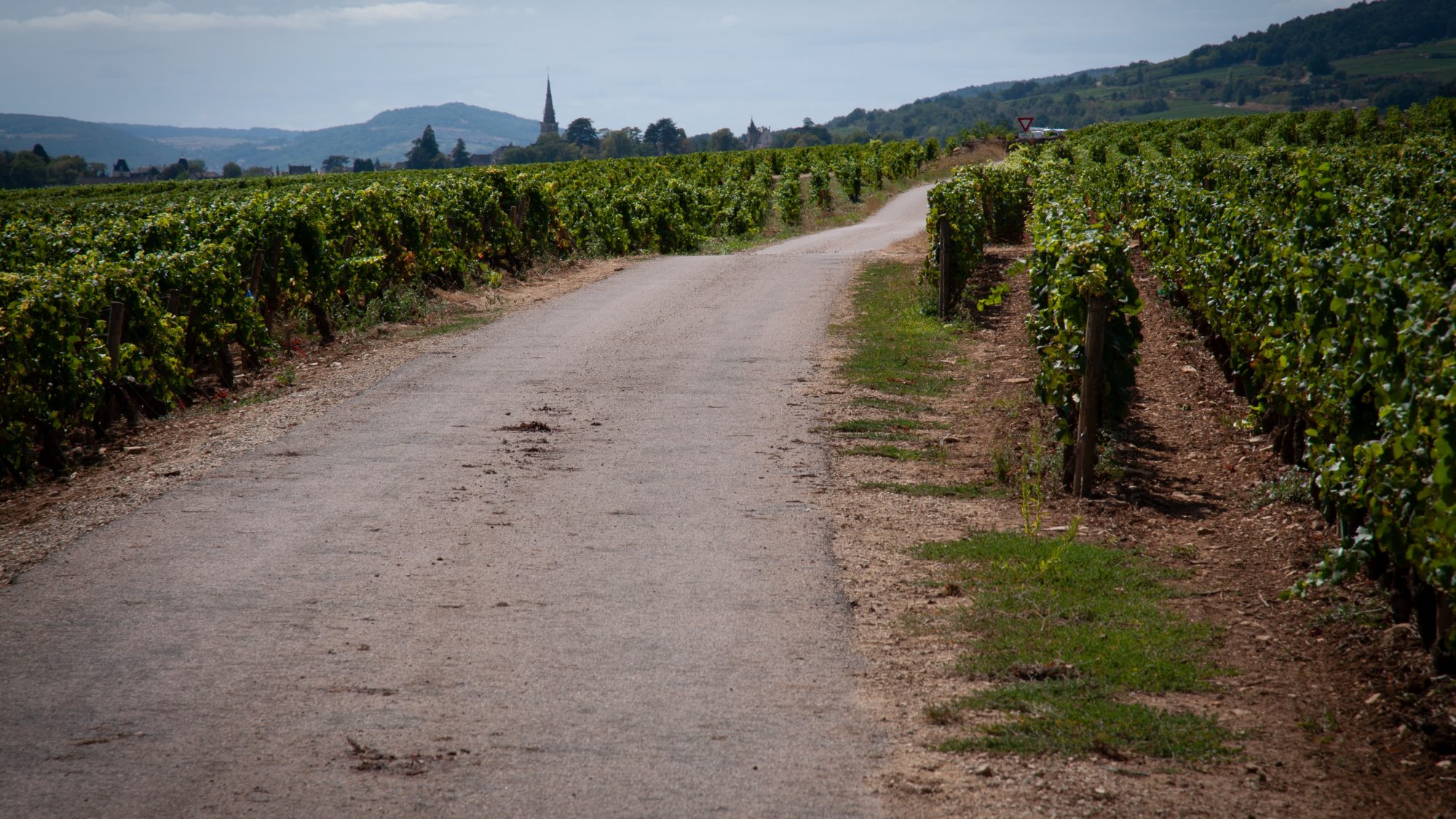 On the one hand, isn’t it lovely to see an image of such unchanging tradition? Cart horses being used to transport the grapes being picked by hand in Burgundy’s Côte de Beaune, with the picturesque village of Pommard in the background, under a beautiful August blue sky… Lovely.

On the other hand, hang on a sec, doesn’t harvest usually begin in late September…? Is that a huge construction crane looming in from the right? And …wait… why does that tree have no leaves?

In fact, this was probably the only horse in action in the vineyards today, where white mini-vans are less picturesque but more efficient, and far, far more prevalent as the other photos show. I had to position myself in precisely the right spot and cut out everything that was happening to the left and right to give you this highly-edited snapshot, which is therefore in a sense utterly unreflective of reality. But isn’t it my job is to make you want to come to Burgundy? White vans and construction cranes aren’t exactly helpful there.

As it happens, I don’t think that is my job. Places are complex and ever-changing, and travel companies that pretend otherwise insult your intelligence and your curiosity. If you find yourself being sold one single simple emotion (Wow! Yum! Gorgeous. Awesome!) ask yourself the question what’s being left out of the picture. And ask yourself why someone thinks you’d want an emotional diet of one single high-sucrose flavour [spoiler: it’s easier to sell].

In this case, there’s a great deal being left out of the shot. And I think the full picture is more interesting than the brochure version. The remarkable continuity of wine-making in this part of Burgundy makes it possible to see significant changes taking place. Reliable records for the grape harvest go back as far as 1371, and with the possible exception of the year 1556, this year’s vendange is the earliest ever recorded. So while you thought you were looking at a peaceful picture of untroubled tradition, in fact this is a photo of dramatic, tangible and accelerating climate change (with no polar bears).

And yes, that large crane overhanging the village is part of a renovation project funded by a Silicon Valley billionaire who aims to open a luxury hotel and to fast-track into existence a deep-pocketed Burgundy wine-making domaine espousing tradition and excellence and slow wine-making techniques. Don’t get me wrong – the project has much to recommend it, creates jobs and distributes wealth. It does raise some questions though.

Pommard and Volnay are connected to the waste water system which runs down to Beaune. Both villages have populations in the hundreds, but the system was built to accommodate populations of tens of thousands, to take into account the massive amount of water used in wine-making in the weeks during and after harvest. It’s a sticky business carting tonnes of sugary grapes around, and cleanliness is the top ingredient in quality wine-making. However, this year, with so little rain having fallen since May, the taps in the village of Monthelie run dry twice a day (so the mayor told me today); while in neighbouring Auxey-Duresses, the run-off from all that cleaning of equipment goes pretty much directly into the river.

Even in picture perfect Burgundy, therefore, you can see all the tensions and constraints of modern life butting up against tradition, requirements running down resources, and small scale localism loomed over by globalist ambition. Not to put too fine a point on it.

Either way, I bet that’s not the world that sprung to mind when you saw that horse with his traditional leather blinkers, the tiled rooftops, and the red-shirted man in the old-fashioned Panama hat. Is he taking a well-earned breather after some honest work, or is he contemplating the end of his way of life? If he’s not, he probably should. It’s taken two generations for a millenium of European peasant tradition to disappear entirely, and it only persists in Burgundy because people are willing to pay so much for the produce. If Covid has taught us anything it’s that if we thought change was fast before, we should fasten our seatbelts.

Jack is in unusually sombre mood for a man who bikes through these vineyards to work and back every day. We even edited out a further rant about the horse. Leave the poor horse alone! Email him here if you disagree with what he’s saying.

...while you thought you were looking at a peaceful picture of untroubled tradition, in fact this is a photo of dramatic, tangible and accelerating climate change...