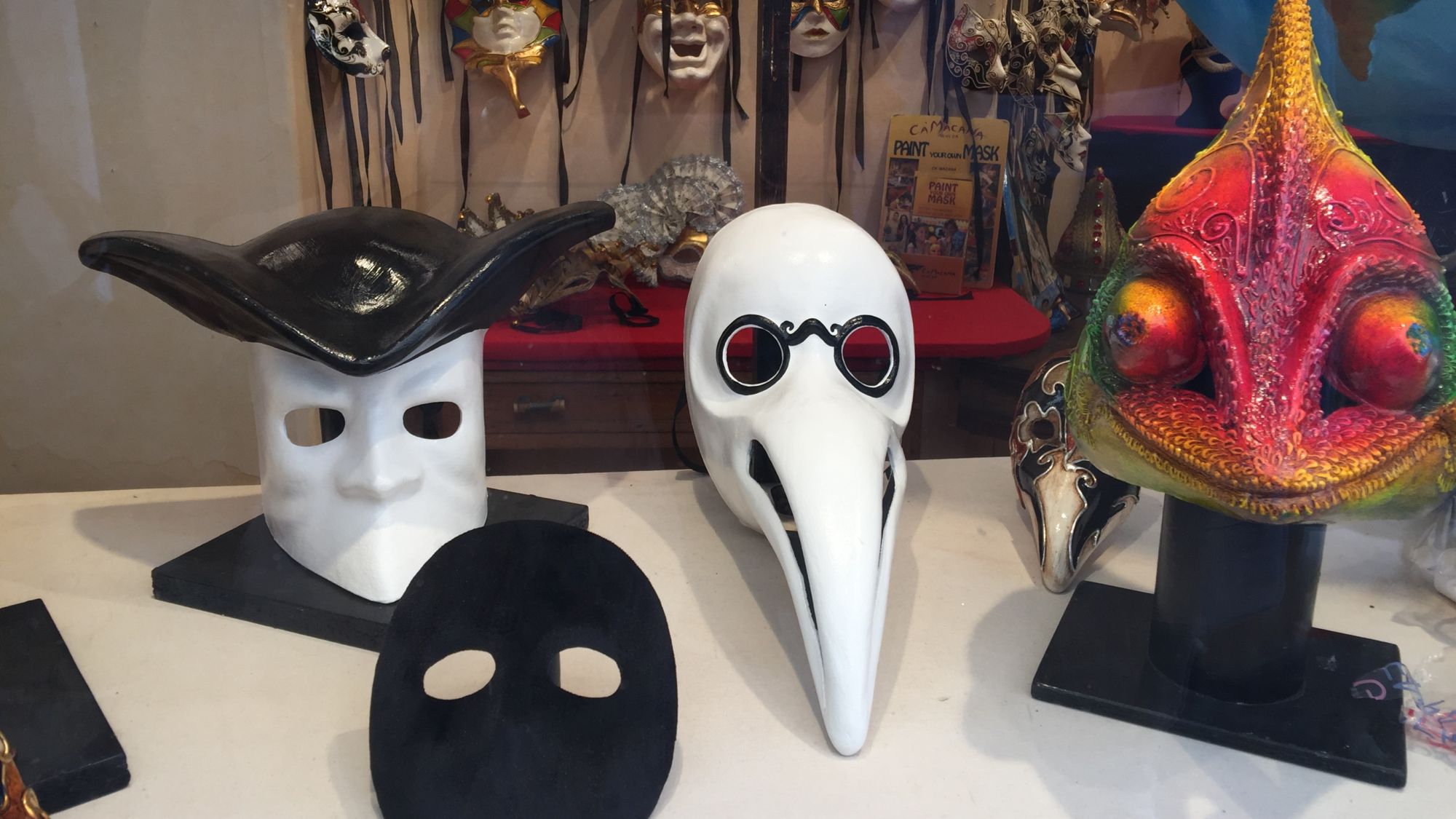 A plague doctor mask, today one of the most popular and iconic during the Venice carnival
Photographer: Luisa Grigoletto 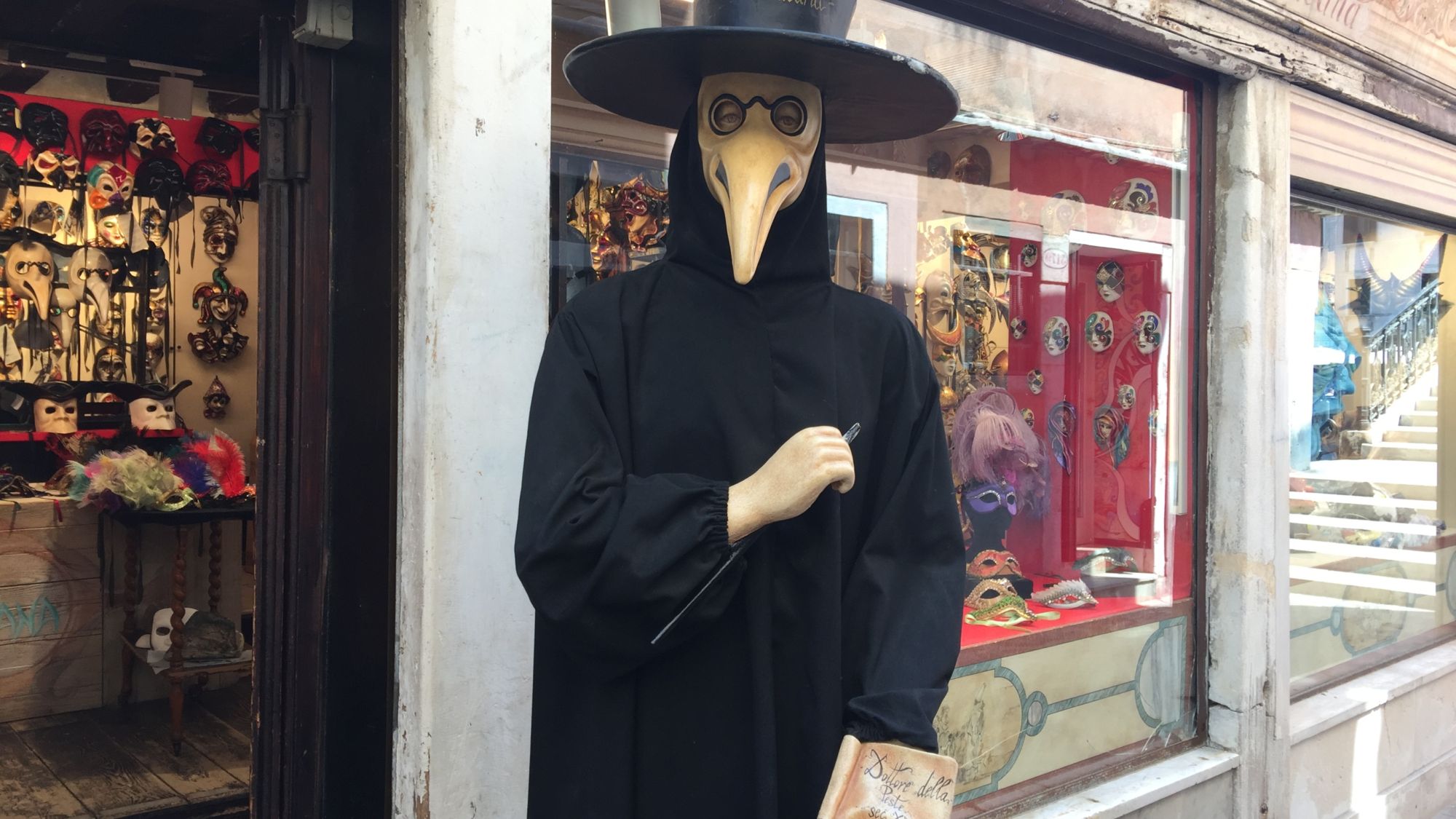 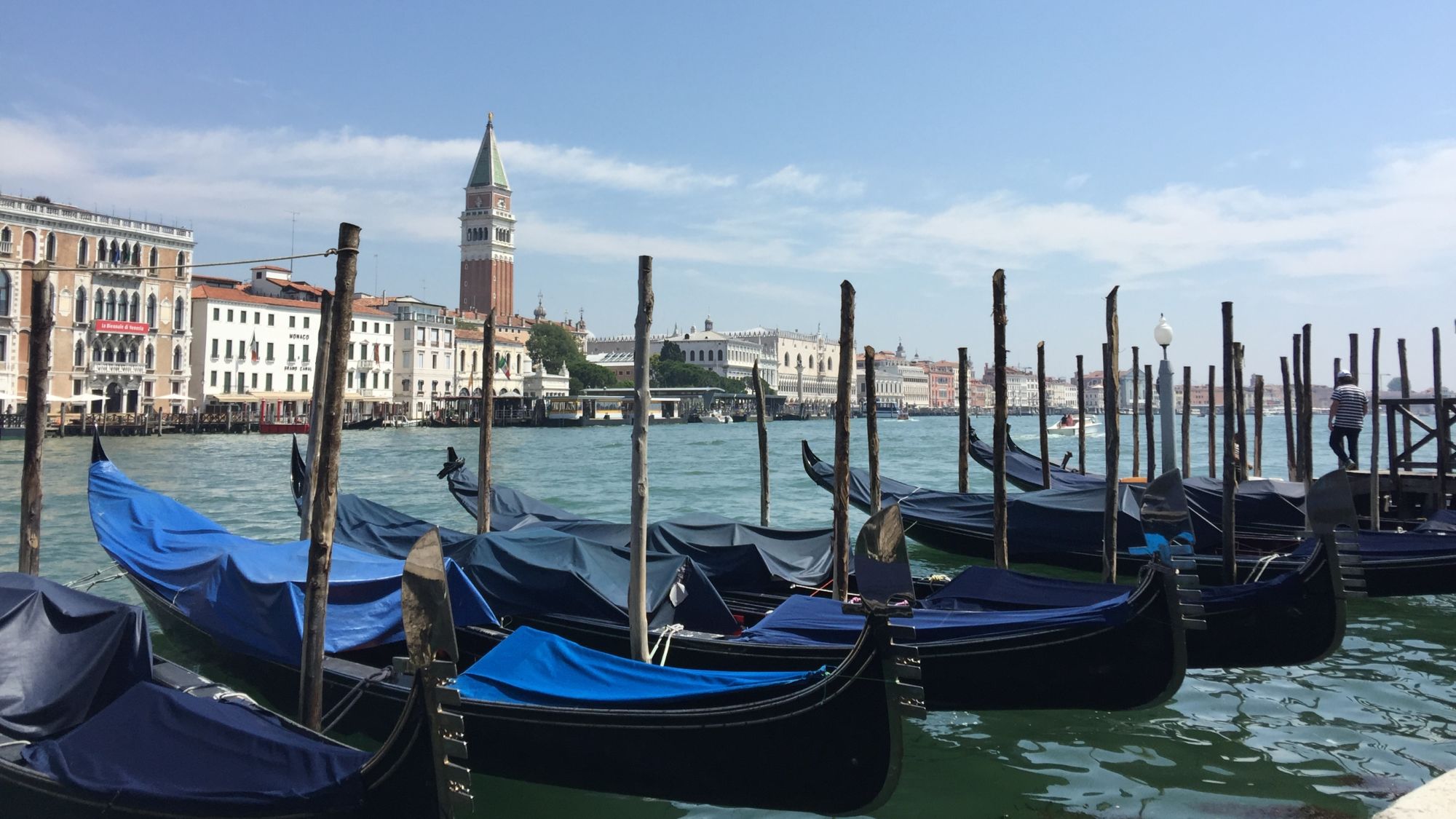 Most gondolas remain moored these days, as traveling is not an option for many 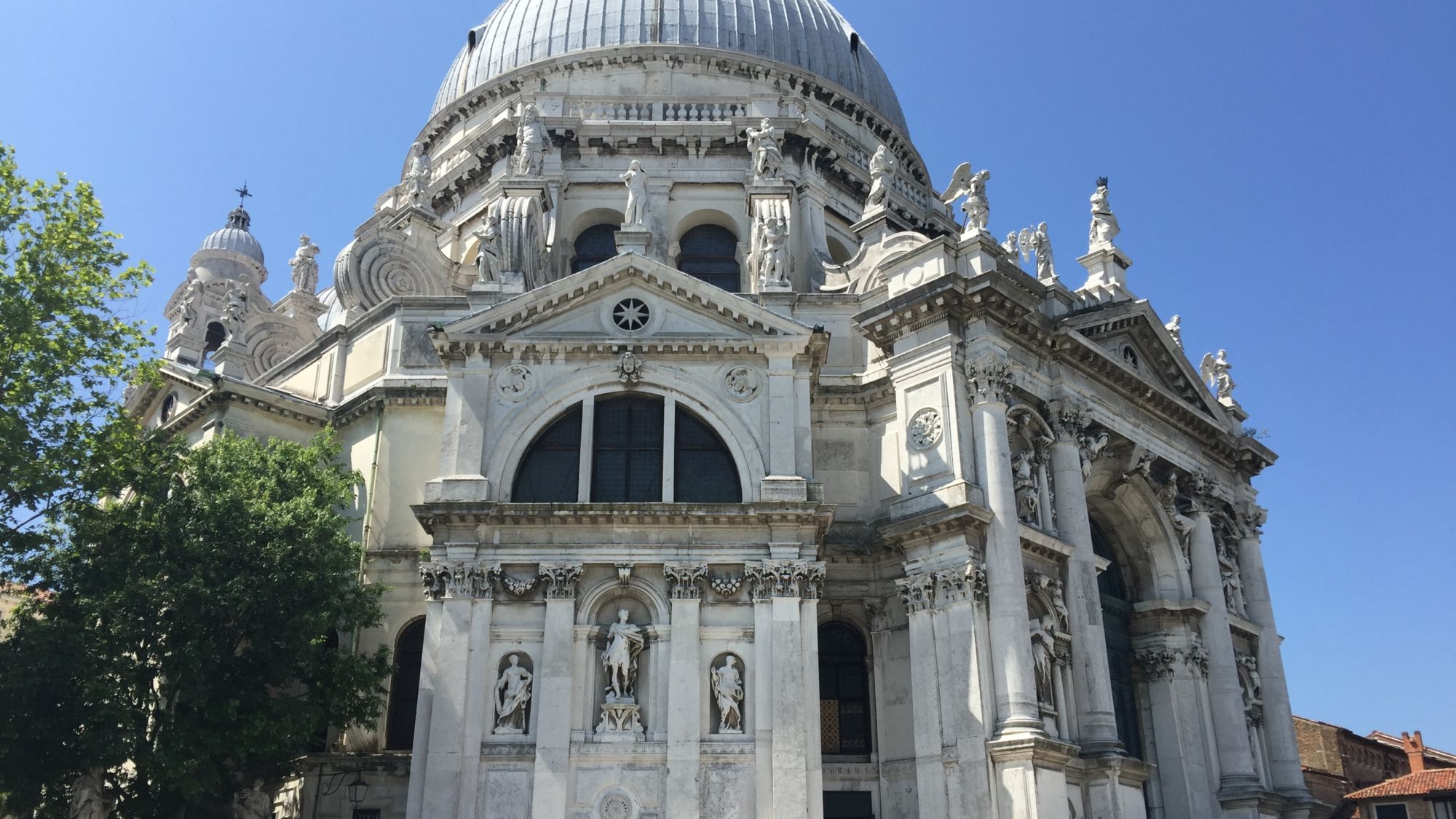 La Salute, erected to celebrate the end of the 1630-31 pestilence, is today regarded as one of Venice's most elaborate churches
Photographer: Luisa Grigoletto

As Italy and most of Europe are gradually lifting the lockdown, many of us over the past few months have become intimately familiar with the concept and the challenges of ‘quarantine’, or sheltering in place for an extended period of time as a measure of public health. Italy reached the mark of 70 days. Some countries are still counting.

But where does the term ‘quarantine’ come from?

To understand, you have to look back to the Black Death. The bubonic plague started spreading through Europe in 1347, decimating its population by a third in just a few years. Cities scrambled to find solutions: they needed something creative, and fast. In 1374 Viscount Bernabò of Reggio – not one for subtlety – started by demolishing the homes of plague victims in Milan, and then ordering  those suspected of being infected to spend 10 days outside the city walls, in the woods.

In July 1377, the Great Council of Ragusa  (or Dubrovnik, in modern day Croatia) established a law to isolate ships and crews – even those not exhibiting symptoms – on deserted islands off the coast, for 30 days. At the end of the 14th century, several cities started issuing “health patents” and prescribing fumigations as a way to disinfect items entering the centres.

Venice, just across the Adriatic, instituted its own lock-down period of 40 days, which they called the quarantina from the Italian word for 40, quaranta, a term which then pased into several other languages including English to  describe any kind of lock down.

Exactly why Venice chose 40 days is still uncertain. The number had symbolic and religious links and would have resonated with anyone familiar with the Biblical tradition: Noah spent 40 days in the arc after God flooded the Earth; Jesus fasted for 40 days in the desert; Lent lasts 40 days and so did Moses’ stay on Mt Sinai. But it may have also drawn on the prescriptions of Ancient Greek doctor Hippocrates, or on Pythagorean theories around the number 4.

What we do know is that, due to recurring waves of bubonic plague, the word infamously entered the common lexicon and precautionary isolation became part of the social practice, and not just on the shores of the Mediterranean.

My fellow Venetians even created an organized system to defend against epidemics – a model if you will – centred around permanent public hospitals, constantly maintained and funded, regardless of plague outbreaks.

In 1423 the city ordered the creation of the first lazzaretto, a place to confine the sick during the epidemic. The site chosen was the island of Santa Maria di Nazareth (which is where the name comes from, a corruption of Nazarethum). In 1468, a second island was designated to host another lazzaretto, this time for suspected cases to spend their quarantine, or for those who had been cured of the plague, before they could safely return to the city. It was called the Lazzaretto Nuovo, to distinguish it from the previous one, the Vecchio (‘old’ or ‘original’). From the 1500s, the magistrates who managed emergencies (provisores super salutem, instituted in 1348) started recording every day, parish by parish, the casualties.

All of this did not stop the plague completely, but these measures of prevention, control, and containment helped curb even more catastrophic effects on the city and its population. The rules, in spite of steep fines, weren’t always followed to the letter, hence the recurring outbreaks, the most severe of which happened in the 16th and 17th centuries.

But the city always bounced back. Much of its culture and architecture still bear the signs of its past battles with contagions. One of the most majestic churches, La Salute, was built after the epidemic of 1630/31 receded. To this day locals and visitors alike take a pilgrimage there every year on November 21st, the feast day. The plague doctor outfit and mask – with the long beak that was once filled with herbs thought to protect from the contagion – are among the most popular images attached to the Venetian carnival.

Summer in Venice has always meant attending traditional festivals and the Redentore Feast, on the third weekend of July. It was created to celebrate the end of the 1575/1577 plague, and is still one of the celebrated local events in town, with a temporary votive bridge built to connect Venice’s southern  banks of the Zattere with the Redentore church on the Island of Giudecca. Thousands of Venetians flock here, carrying sarde in saor, stuffed duck, and snails for a meal on the shores or on their boats, and waiting for the midnight fireworks.

Although coronavirus is not the plague, this year the Redentore Feast will be different. Many feared it would be canceled altogether, but at the time of writing, the event is scheduled to happen nevertheless. Attendees will need to book a spot on the shores, respect social distancing, – and wear a mask (but what could be more venetian than that?). Using your own boat is strongly encouraged. My calendar is marked, but considering that further lockdowns are always a risk — and this is the city that coined the term quarantine — my fingers are also crossed.

[Sadly, since Luisa wrote this article, the festival has indeed been cancelled. Ed. 9 July 2020]

Luisa kept us updated throughout the Spring on the state of lockdown in Italy from her Roman apartment, from the more serious-minded concerns about friends and family in her native Venice, to some pretty amusing anecdotes about the innate Italian ability to find ways to bend the admittedly draconian social-distancing rules. Contact her directly to get an up to date picture of life in Italy (or some superb quarantine recipes).

The plague doctor outfit and mask - with the long beak that was once filled with herbs thought to protect from the contagion - are among the most popular images attached to the Venetian carnival.