Where do chairs come from? 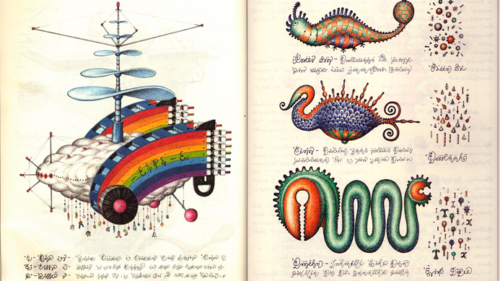 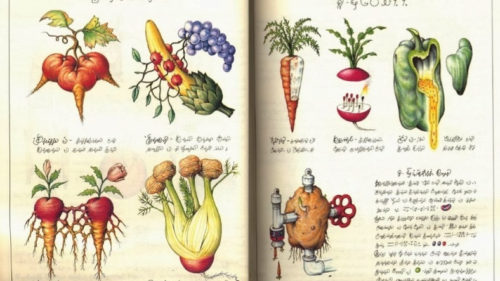 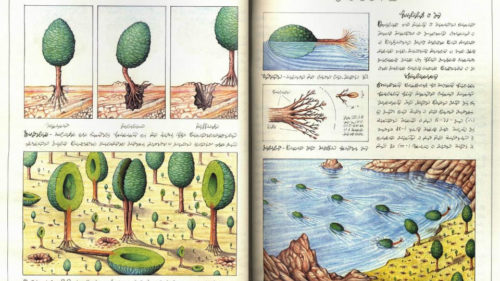 Trees going for a swim, or the tree migration 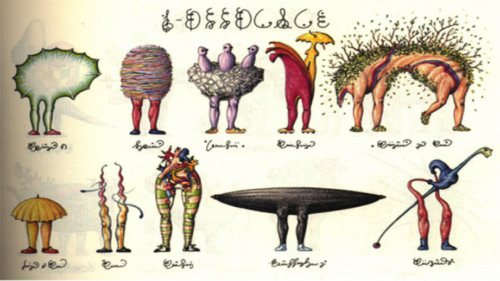 One of the Codex's most famous pages, a couple morphing into an alligator 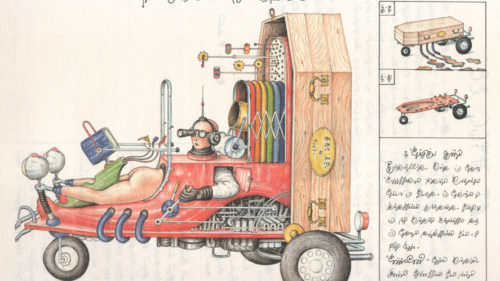 "In the death car, we're alive"

With the advent of the digital era, many bemoaned the disappearance of books as physical objects and pointed to the dangers connected with such a possibility, for it might change the way we think.

So, these days, when a book becomes a literary case, that’s already cause for celebration. If that book is an art book that’s even more surprising. And if the internet contributes to promoting its fame across the globe, then we’re looking straight in the eyes of a beautiful paradox in the era of digital impermanence.

Such is the case of the Codex Seraphinianus, one of the most enigmatic, debated, and surreal volumes of the 20th century. More than 40 years have elapsed since it was first published, but time has been kind to it: if anything, it has been ageing extremely gracefully, looking better and better with every new edition (the latest in 2021), like a bottle of bold red wine. In the 4 decades that have passed, its status as a cult object has only solidified and grown exponentially, also thanks to the commentary of brilliant minds such as Italo Calvino. Copies from the first edition have become collector’s items.

It would be reductive to call it an art book, even though it’s filled with hundreds of drawings. It’s so clear and detailed that it resembles a scientific treatise. Its author, Roman artist Luigi Serafini, refers to it as an “encyclopedia of the imaginary world”.

Divided into 11 chapters, its all-encompassing nature is evident in its attempt to provide detailed descriptions of anything from exotic flora and mysterious fauna to unknown minerals, from obscure machines to never-before-seen bipeds and impossible architecture. Each page, or table, is accompanied by an elaborate text, written in elegant calligraphy.

Because of his encyclopedic approach, it’s often been compared to Pliny the Elder’s Naturalis Historia, Lucretius’ De Rerum Natura, and Leonardo’s Codex Atlanticus, whereas its drawings have been likened to works by Jean-Jacques Lequeu, M. C. Escher, René Laloux, Jorge Luis Borges, and Hieronymus Bosch. Ah, to be able to grasp the unfathomability of the world, its essence and its laws, and distill it into a grid of categories that inform our understanding!

But the more you flip through its pages, the more you’re left wondering: what universe am I contemplating here, and what language am I trying to decipher?

You perceive it must have something to do with the concept of matter’s potential to take infinite shapes and the Illuminist idea of trying to arrange chaos (or our knowledge of it) into an orderly system. But you also pretty soon realize that here the laws of evolution have imploded: it’s metamorphosis on acid, a visionary capriccio of the mind. This language looks very familiar to an eye that’s used to the Western writing system, as if you could indeed crack the code, if you only tried reading one more page. But the solution always escapes you: this is in fact a made-up alphabet and the text is fully asemic.

Someone said that words make worlds: but if you don’t understand the words, can you still create an image or a shape of the world? The answer seems to be a resounding yes (supported also by research).

The author has stated that he wanted to recreate the feeling that kids have when flipping through a book they can’t read yet – they make up the words, the sounds (goo goo ga ga indeed), and the narrative, weaving the images together in a story that’s all in their mind, assigning an arbitrary meaning to those scribbled words, and arranging them in a plot that makes sense to them, depending on their own experience of the world around them.

I could not think of a better analogy for travel, and a wish for the year ahead, than the invitation I see lurking through these pages: the Codex is a game, an enticing invite to follow the white rabbit and free your head: obsessing over its meaning would be pointless, just an exercise in style that dispels the magic and defeats the purpose.

Like for the surrealists, and for kids, play is a serious matter. Marvelling at the intricacy of the world, its details, without trying to decode everything, but making your own rules, while embracing the serendipity and the unknowns: that is where the possibility for new stories and adventures comes to life.

To talk about more crazy books and other modern amanuenses, drop a line or send a drawing to Lu here.

Marvelling at the intricacy of the world, its details, without trying to decode everything, but making your own rules, while embracing the serendipity and the unknowns...