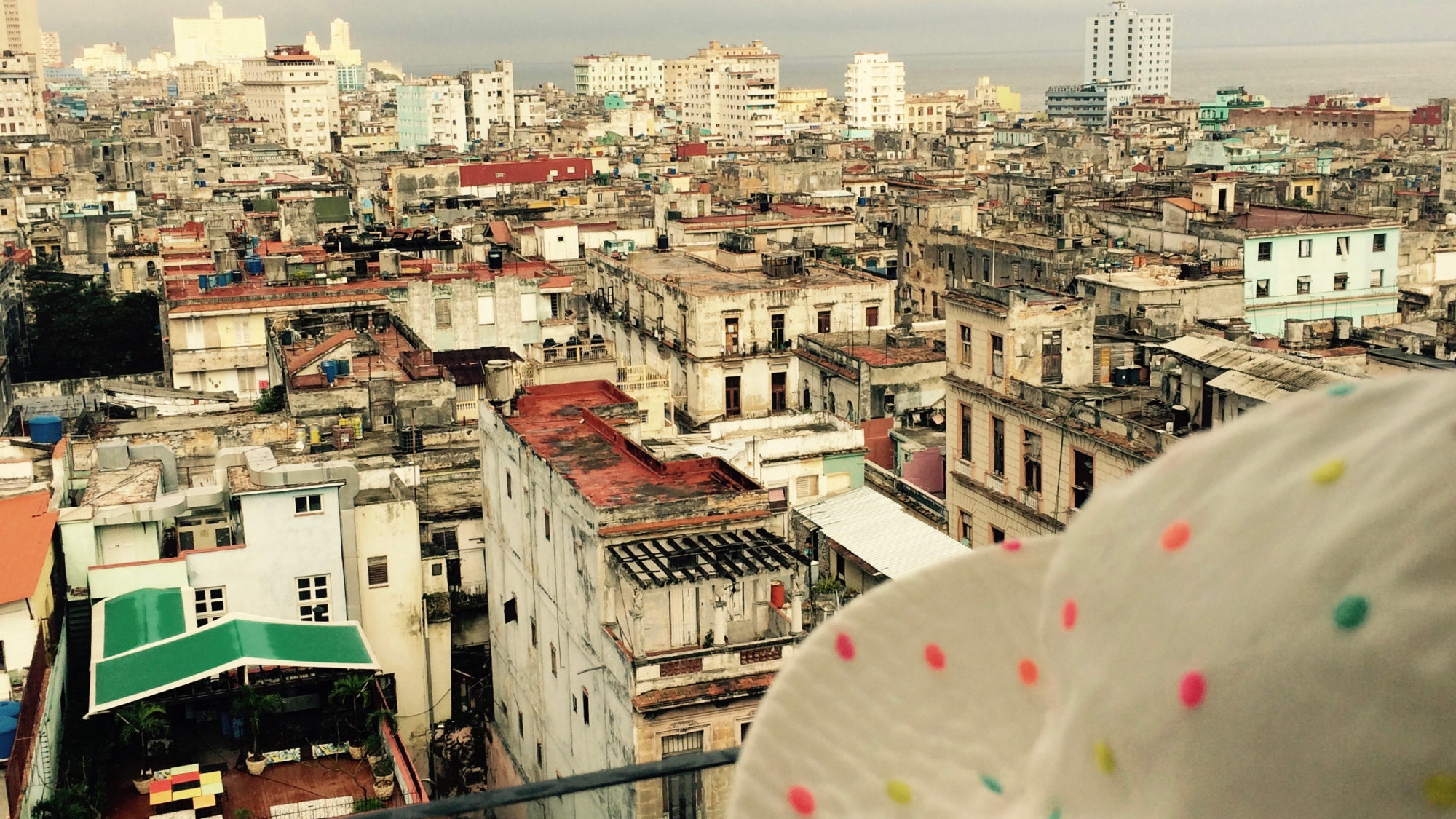 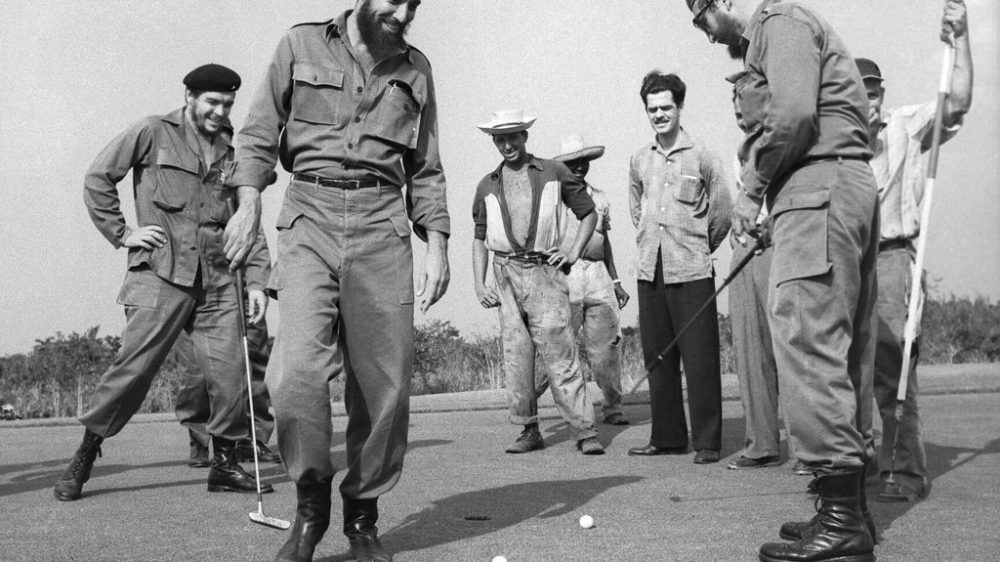 Where the idea was born 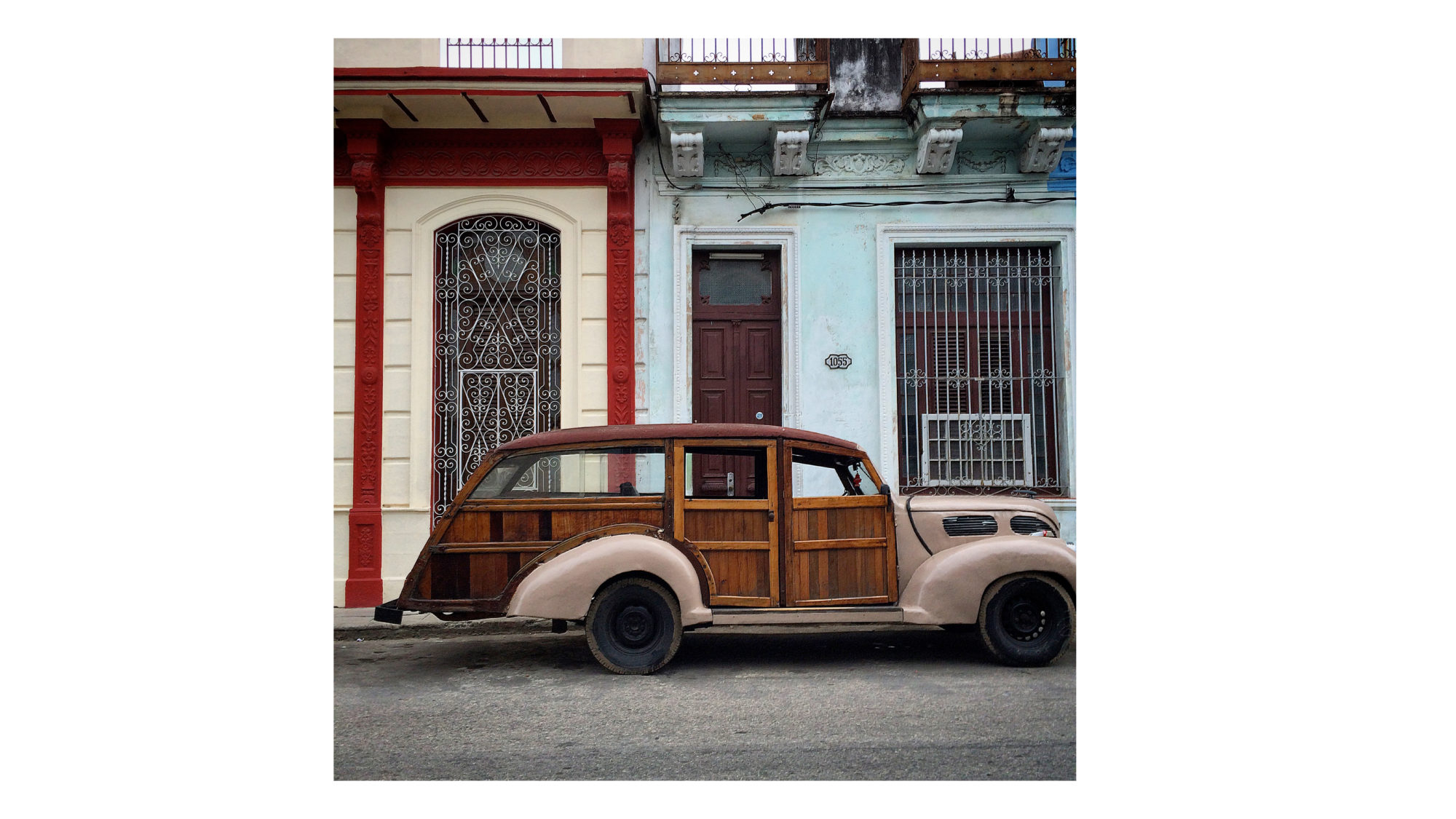 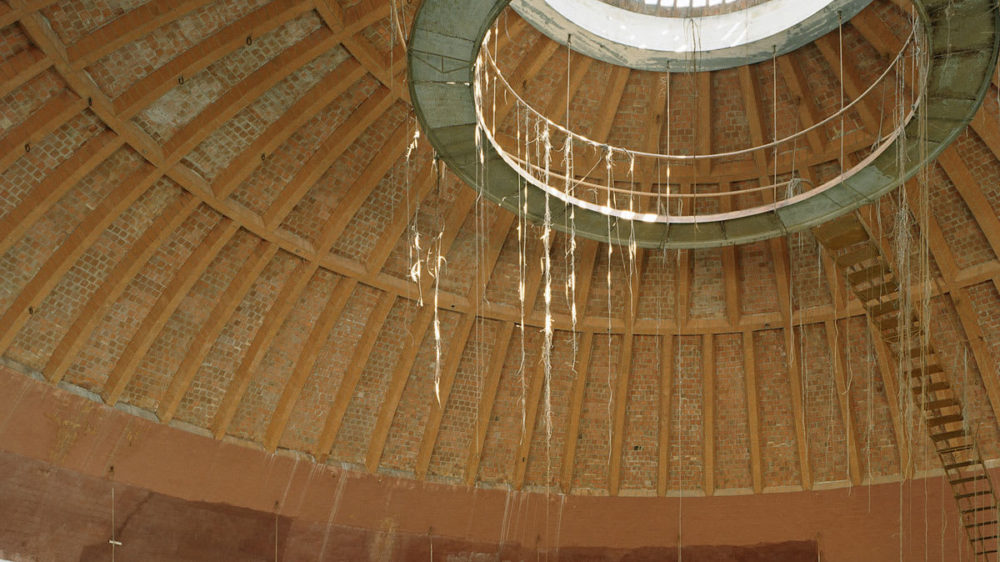 The age of the schools worn by the growth 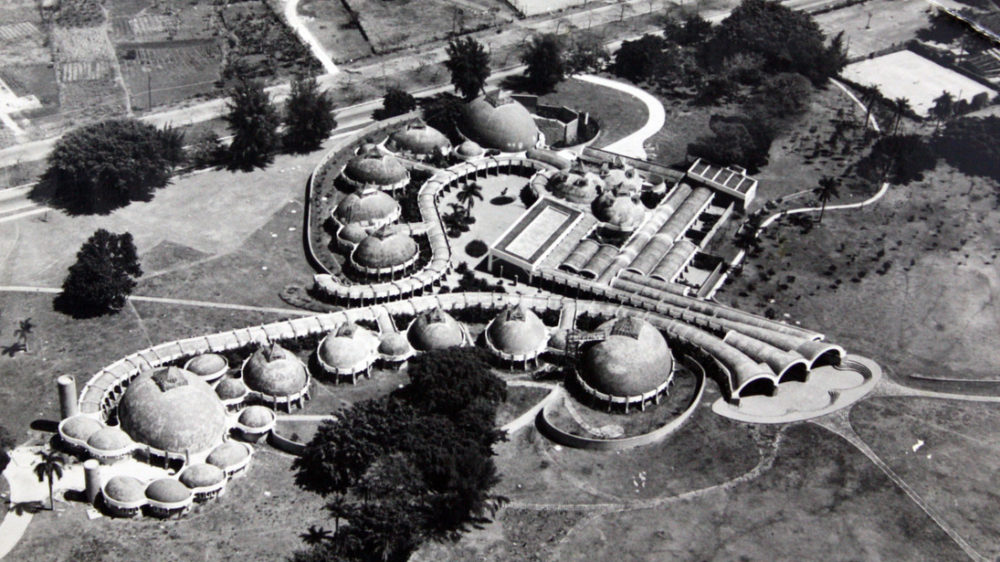 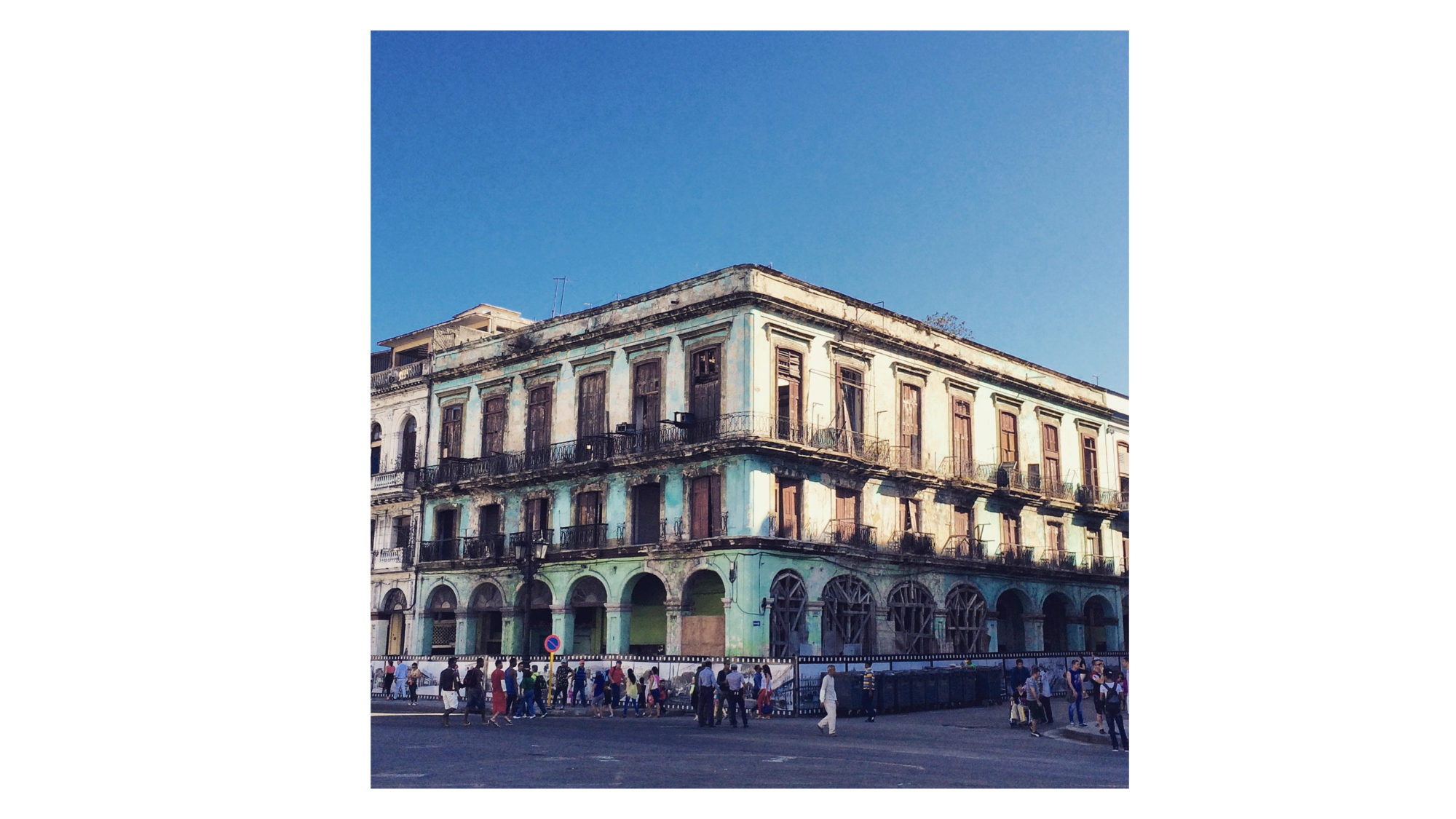 The Syncopated Pulse of a Rumba

Castro and the revolution reached Havana on 9 January 1959.  Two years later to the month, while reducing the US embassy and stoking the early embers of the Bay of Pigs, he and Ernesto “Che” Guevara went golfing at the Havana Country Club Park, a sprawling chunk of the city, rolling hills, manicured greens.  It was an absurdity rather than an actual love of the game.  Photo’s were taken and while walking the course and seeing what all the fuss was about, Fidel and Che concocted a plan to re-purpose the space.  They sat and drank and talked about building something instead of a private club, something public and glorious and encapsulating the heart of the matter, a city for the arts that would attract students from all over the globe; plastic arts, modern dance, music, drama, ballet.  Not ones to waste time, post golf and drinks and talk, late afternoon as they drove back to the city (the country club is about 20 minutes from old Havana) Fidel saw a young well-known architect Selma Diaz on her way home, had the driver pull the car over and asked her to help create such a place.

Diaz asked a few of the star architects she knew to help, Ricardo Porro, Roberto Gottardi, and Vittorio Garatti; and it was decided that for each of the five disciplines or schools, five different buildings would be erected.  Porro knew time was going to be a factor, that in a time and place like Havana in the early 60’s, you never knew when either the money or the idea would start to fade, so as they drew, they built, and as they built, students started to move in.  Usually this process is linear. A place is thought up and conceived, then built and constructed, then open to allow for function; but this project moved and breathed into life en masse, it was creation in a frenzy like a dance floor at 2 am or the syncopated pulse of a rumba.

While constructions were just starting, the embargo to the US had been put into effect so the only materials that were usable were local, clay bricks, limited amounts of concrete and true grit.  Terra cotta floors, brick walls, and Catalonian vaulted ceilings that were able to cover large spaces without steel or beams, materials out of opportunity.  No one on the island knew the process of vaulted ceilings, but there were experiments made, and rediscovery of age-old techniques were created anew in parking lots with brick and mortar.

The following few years would see the project start, blossom, then wither under the pressures and changes in the ideology of a new Cuba. The look, the feel of the place is whole and particular to Havana and Cuba and the 1960’s and the new-born beat of the revolution.  Once ideas started to change in the revolution, other techniques were brought from Russia and a purging of art began.  Russian construction was prefabrication, it was not individual, or artistic, but utilitarian, fast, cheap. Money was needed and funding was cut for “non-productive” architecture projects, projects that would become forgotten as an embarrassment of an over zealous spending spree in the early days of the revolution, the romantic stage of the revolution. Porro, Gottardi, and Garratti were either exiled or thrown into work camps and the project left to the humid rot of the jungle.

In a way, the reputation of the school represents the history of the ideology of the revolution in Cuba. Idealist-youthful-artistic-open… into utilitarian-militaristic-prefabricated.

And there it sat, sometimes used by the students, but not talked about, a blemish, a blip, a stain to keep but to forget.

I had heard about the school through a preservation architect named Norma Barbacci who was the director of field projects in the Hispanic world for the World Monuments Fund. She told me the story of the property and knew it well as she was in the act of trying to save the place (she also helped make a film about the history Unfinished Spaces).  I was heading to Cuba to do some research so mentioned that I should try and see the ruins of the school while I was in Havana.  This was 2015.  Between 1961 and 2015 it has been used off and on officially and unofficially as a school throughout the years. I had heard that Carlos Acosta, the famed ballet dancer and director of the Birmingham Royal Ballet, wanted to help reconstruct the ballet school, to bring it life, but the project stalled. There had been small resurrections in the 80’s and late 90’s but by the time I flew in and the doors of Cuba were slowly opening up for Americans, it was still surrounded by chain link fence and continually being masticated by the jungle.

Everyone I met I asked about the place, thinking it would be one of those secret proud loves a city can have, that when asked about a small smile curls on the corner of the citizens’ lips. But I misunderstood Havana, the depth of that city, what that city has been through. No one seemed to know what I was talking about. Drivers would avoid the subject and take me to other sites instead. I am not sure if it was a place that was not known well, or a place that was collectively avoided because it hurt to talk about.

I recognized a dance that I had started to learn when I lived in China.  The social situation where you can’t really talk about a thing or place so barriers are put up to avoid the matter, scalable verbal barriers where you are almost encouraged to scale if you can, if you can figure out the puzzle of culture, if you can find the invisible verbal ladder, if you can figure out how it is talked about without being mentioned.  This dance got me in trouble often in China until I learned the rhythms.  In Cuba I knew I needed to be patient, I knew I shouldn’t push.  So I found where it was on a map, and asked my driver Ernesto to take me to a specific address near where I thought the school to be, so we could both discover it by accident together and no blame could be laid.  I waited until the last day of my trip, late afternoon.  When I asked Ernesto and showed him on the map where I wanted to go, after 2 weeks of driving around Cuba and loosely asking about the National Arts Schools and getting nothing, a curl twitched on the corner of his lip and off we went.

The National Art Schools were surrounded by chain link fences, glimpses of buildings here and there could be seen from the road but mostly green and fence.  Fences with corners peeled back and brown single track trails going off into the green. I knew that if I were to go through the fence, like the cavernous garden homes I knew in old Havana, I knew it would open up to a parkland and there would be magic in the landscape and architecture. But I wasn’t able to get inside, or more accurately, I chose not to go.  All ready on shaky ground as an American in Cuba, I didn’t want to have a “break and entry” on my record with travel in Cuba, and my newborn daughter and wife were waiting for me back at the hotel, it wasn’t the time, it wasn’t the place. Knowing that it isn’t covered over with parking lots and prefabricated apartments was enough for me.

I plan on going back though. I fully plan on committing premeditated trespassing so I can walk the humid halls of Garatti’s School of Ballet and imagine the circus that worked there in the early 80’s, and perhaps, catch a feeling of the romantic days of the revolution.

I reached out to Norma recently and she mentioned she last went a year ago. She said the fences were still there.

Before Tyler is thrown into Cuban prison for his passions you can read his other tales here.

"I plan on going back though. I fully plan on committing premeditated trespassing so I can walk the humid halls of Garatti’s School of Ballet and imagine the circus that worked there in the early 80’s and perhaps, catch a feeling of the romantic days of the revolution."