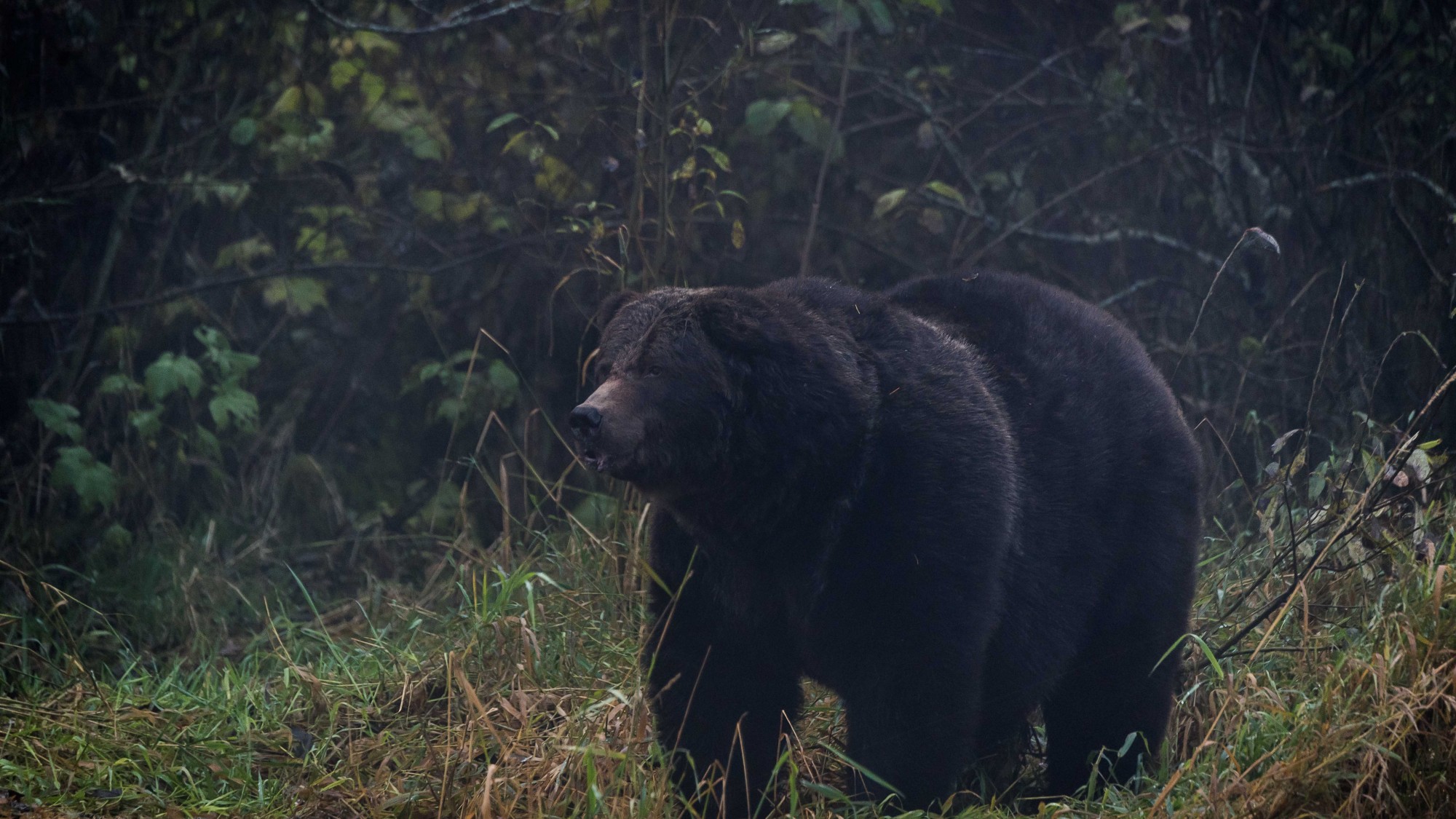 A bear on the bank. Photo: Dan Achber 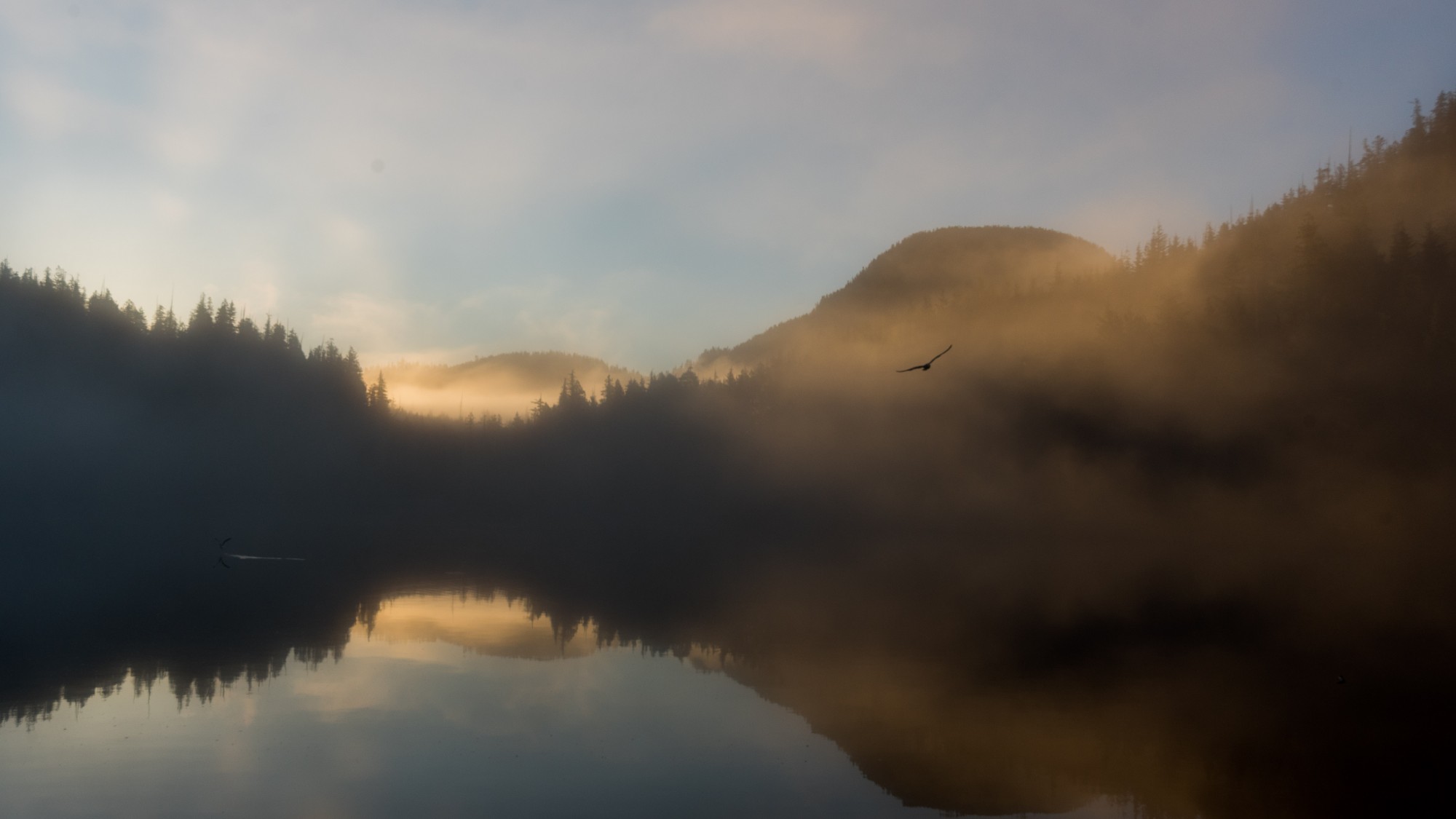 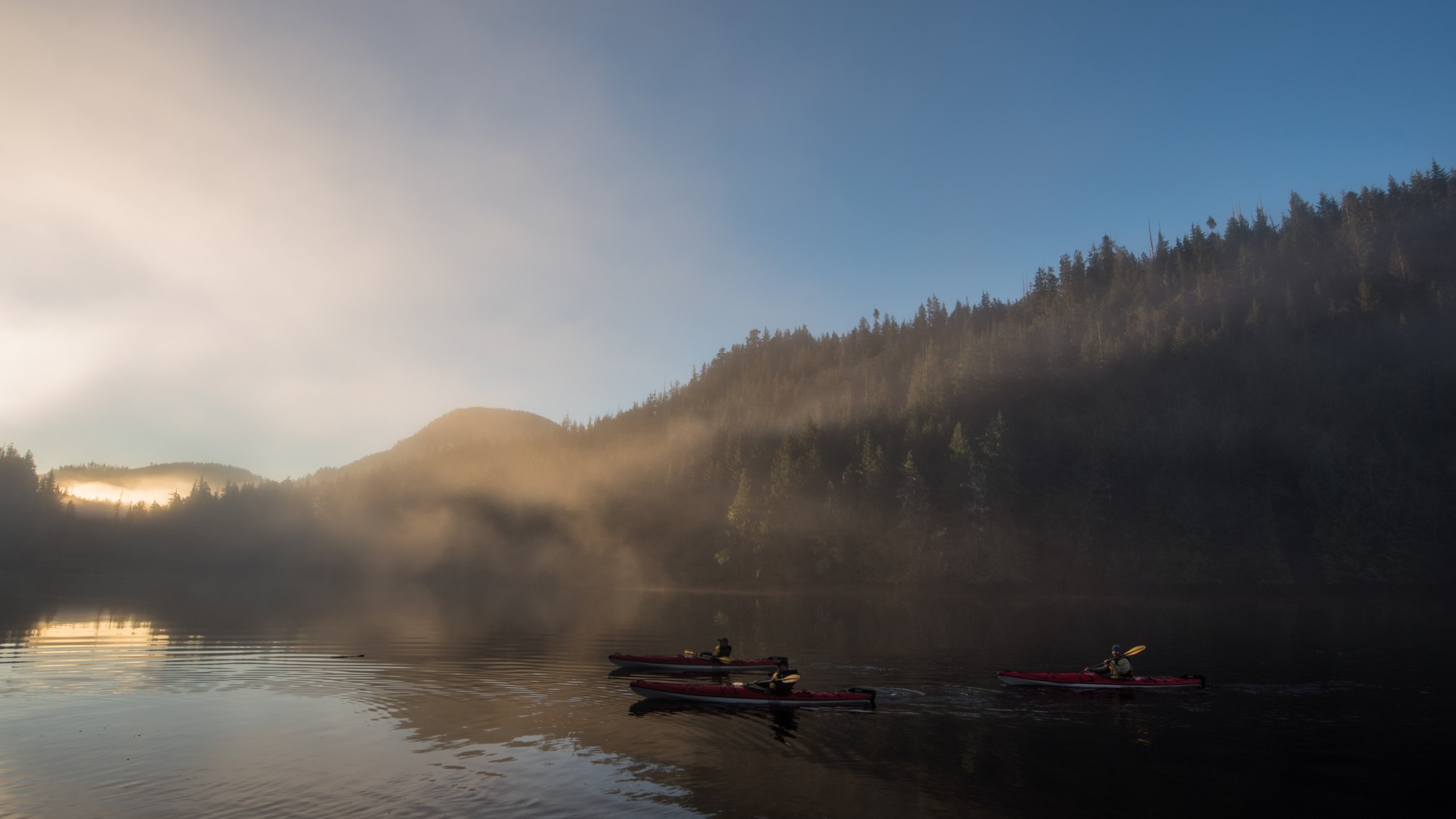 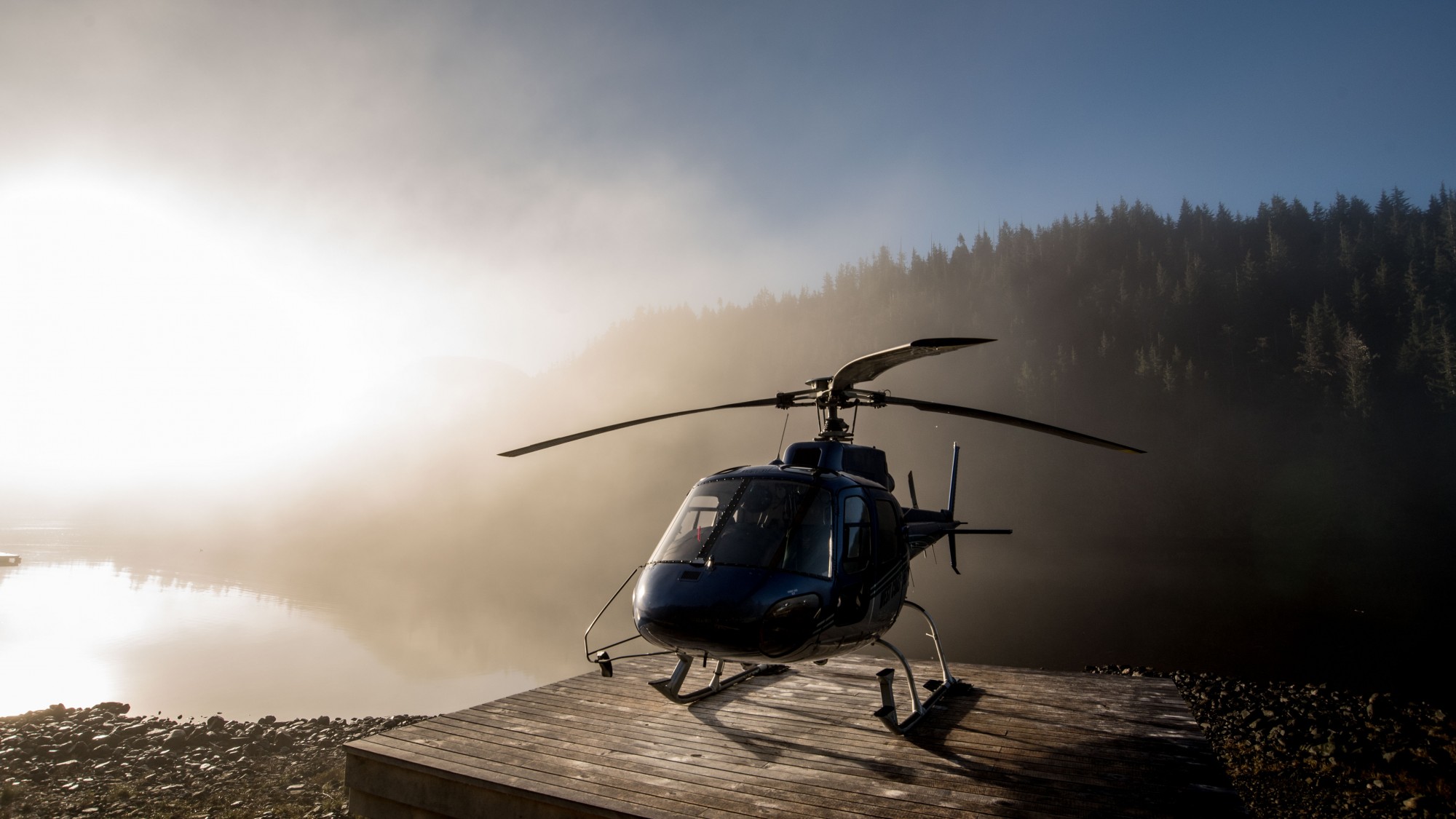 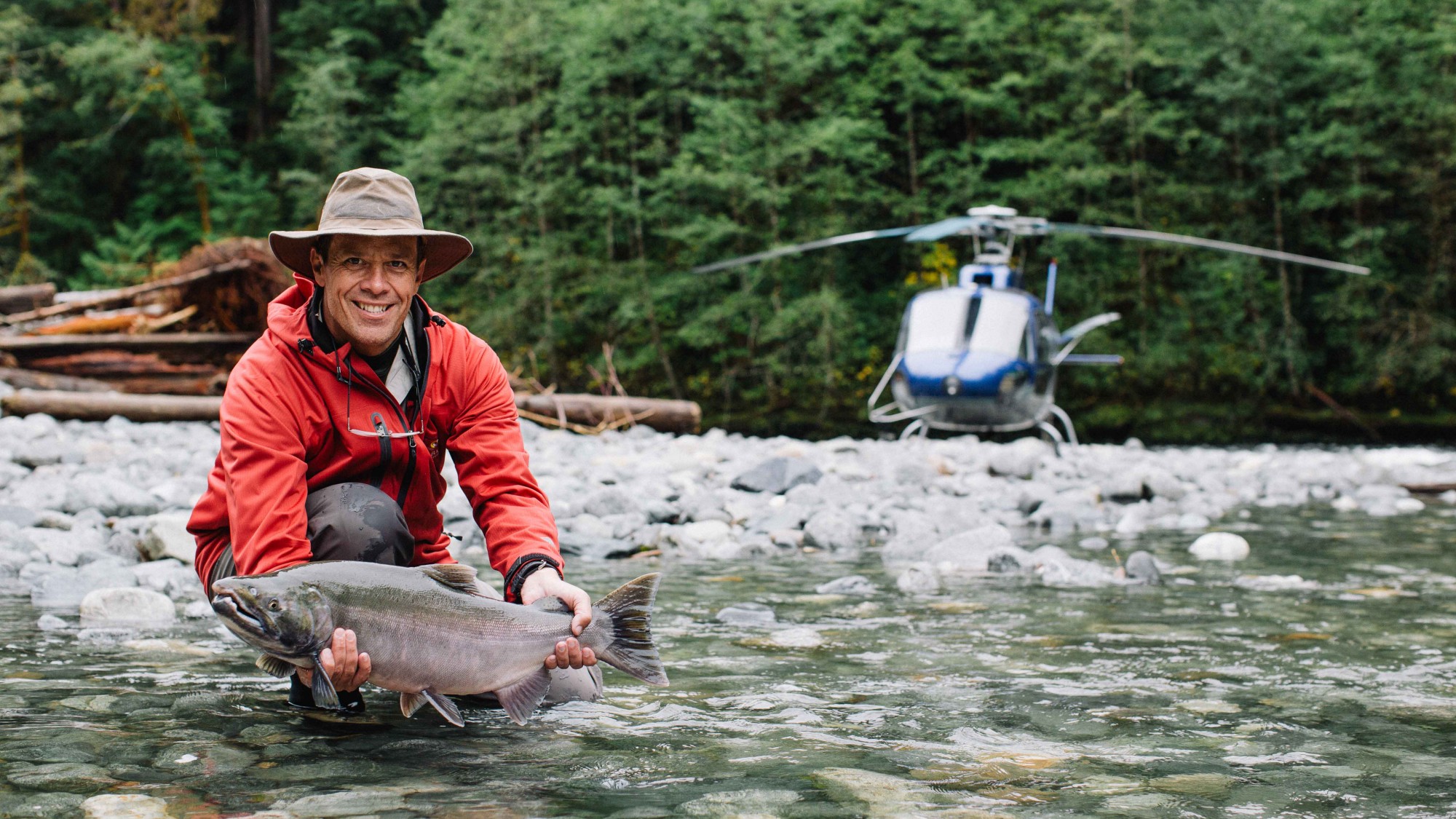 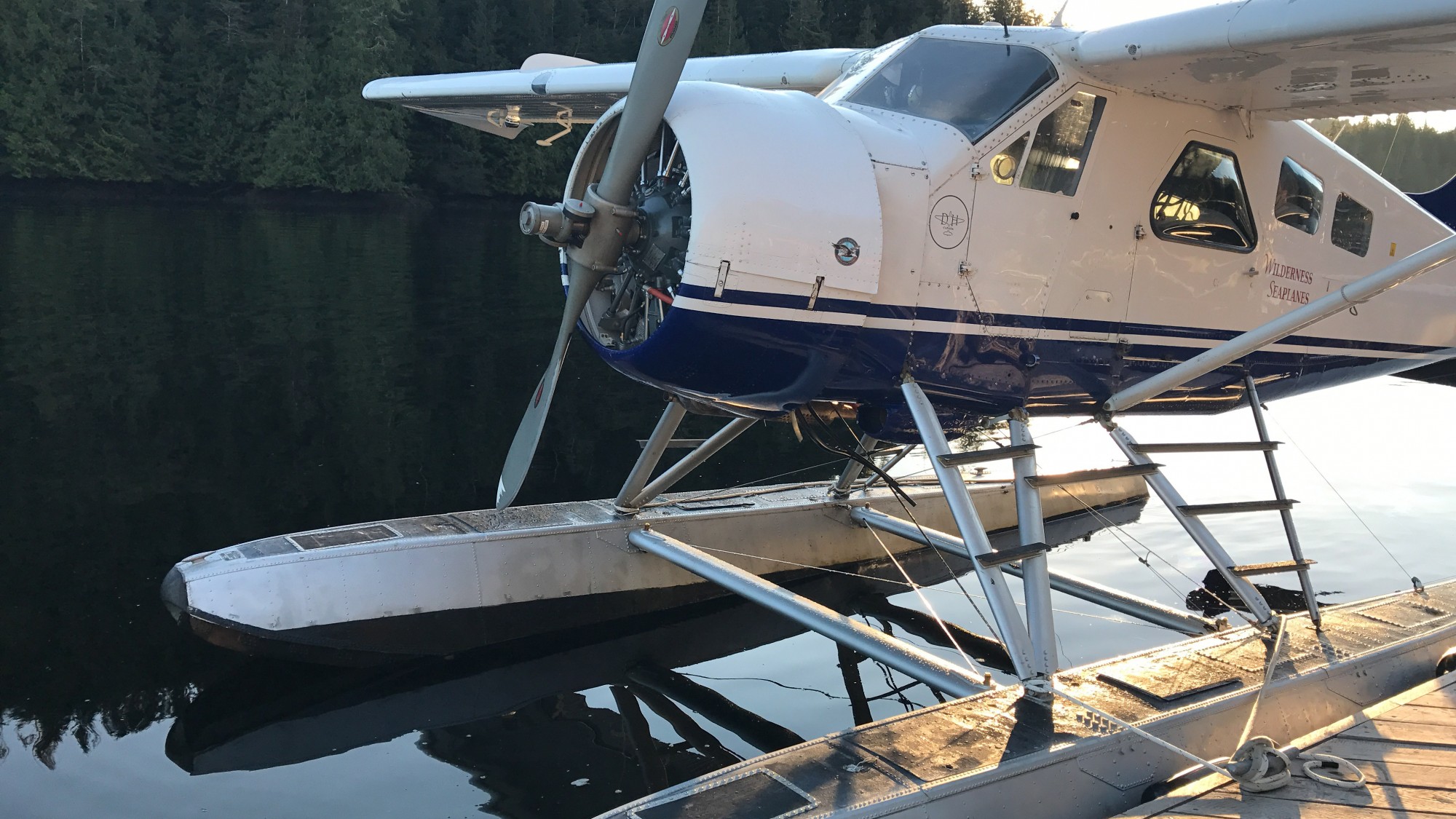 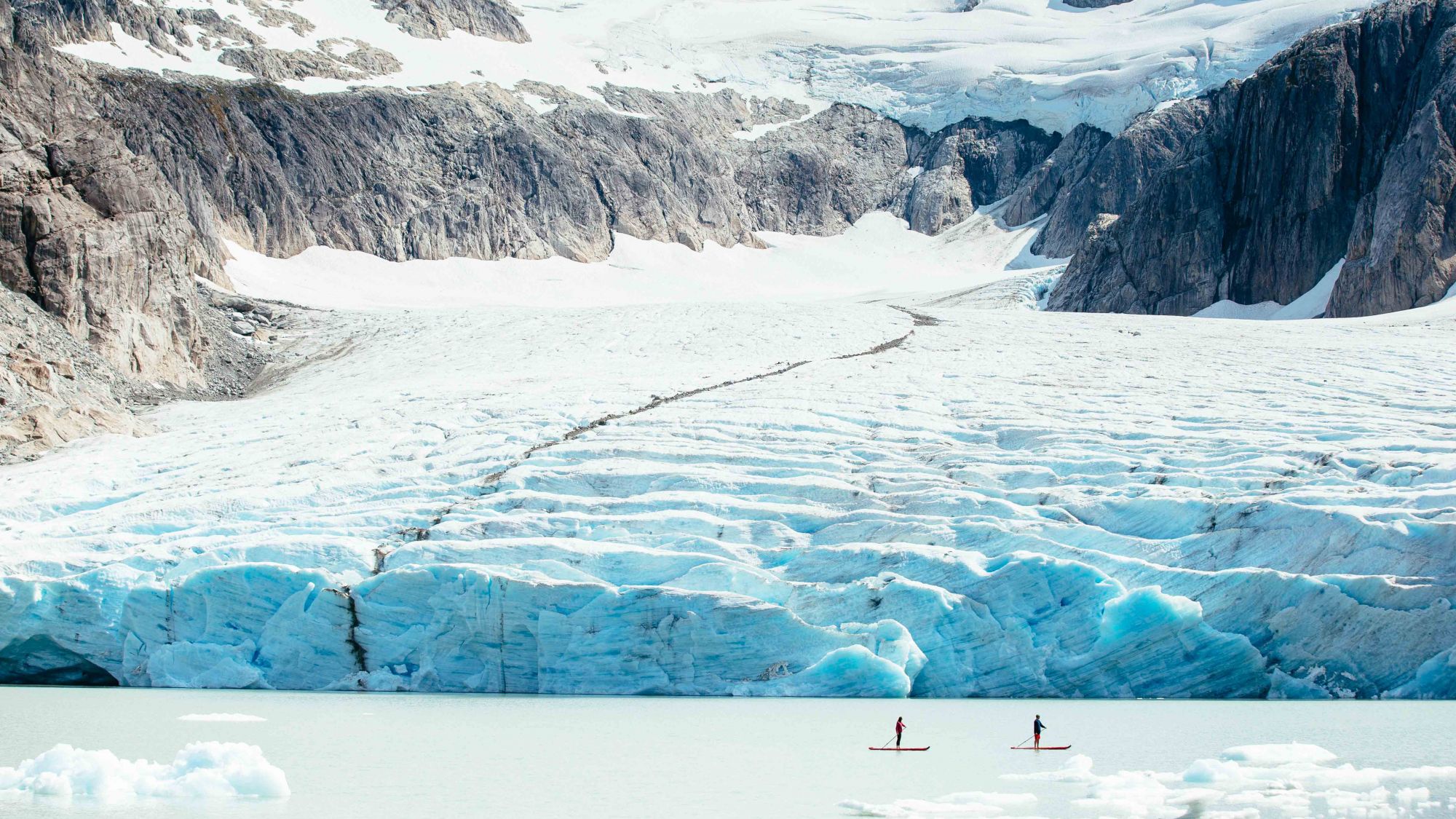 Paddleboarding next to the glacier. Photo: Nimmo Bay 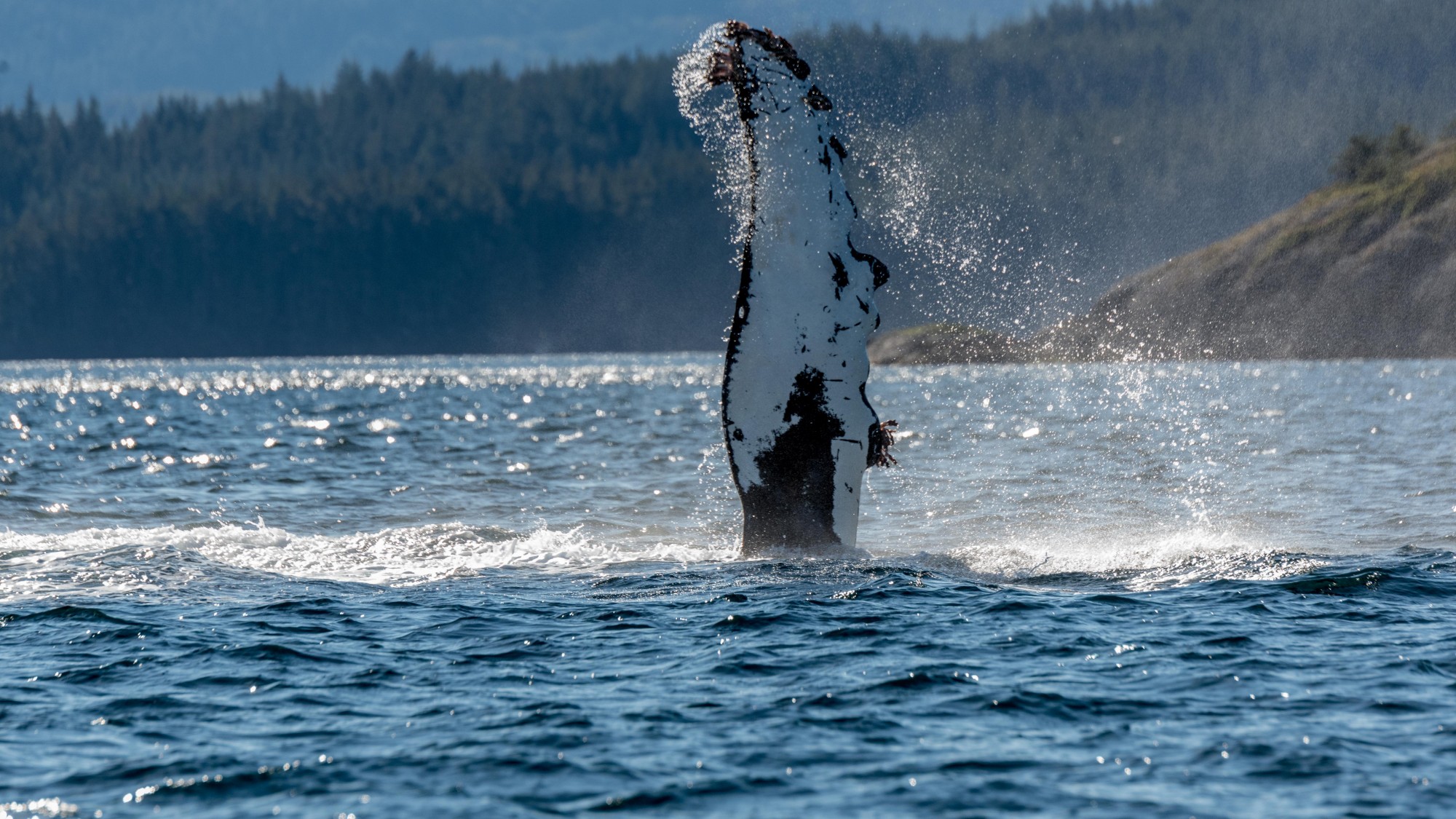 It's no fluke to see a humpback. Photo: Dan Achber 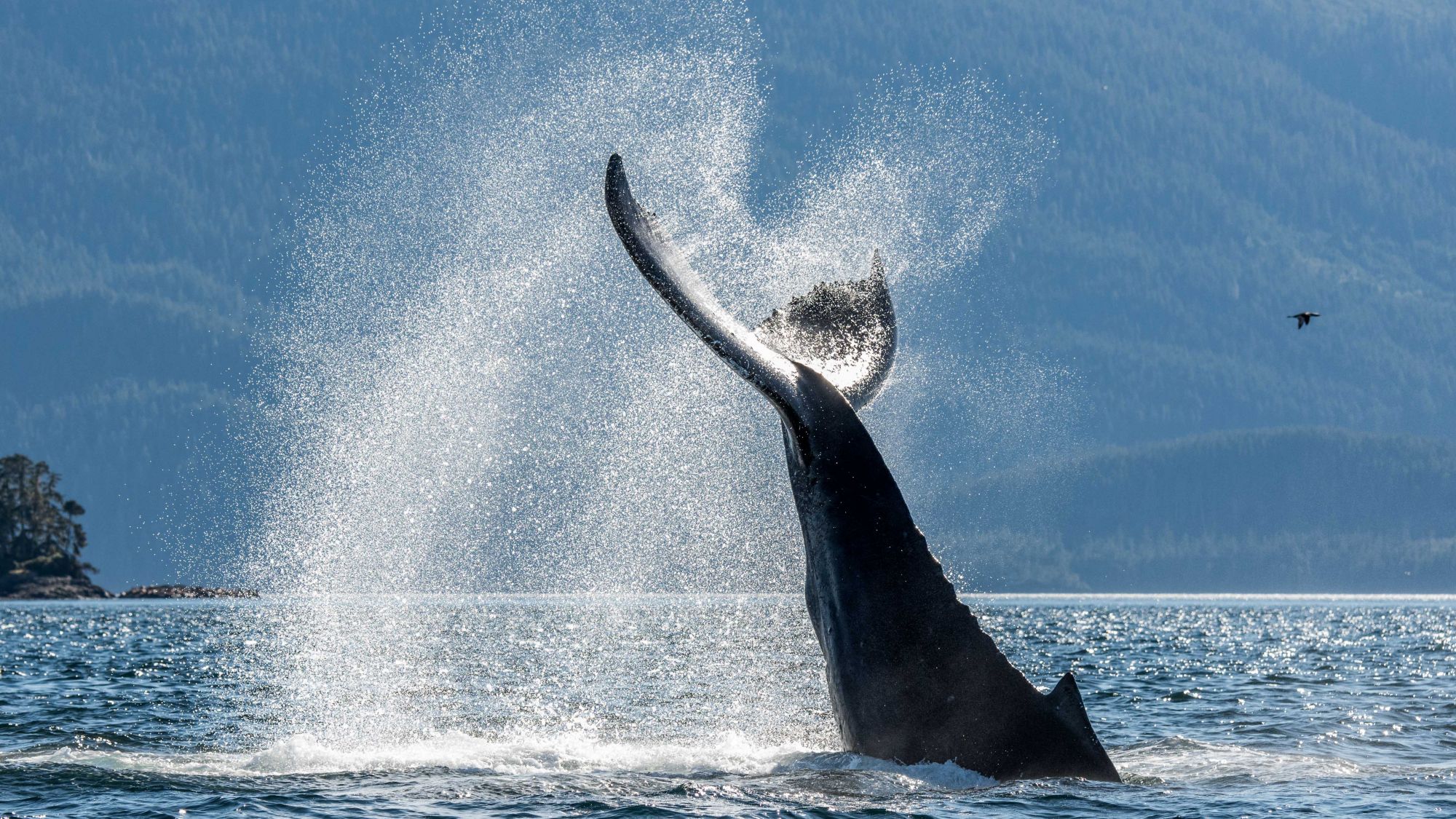 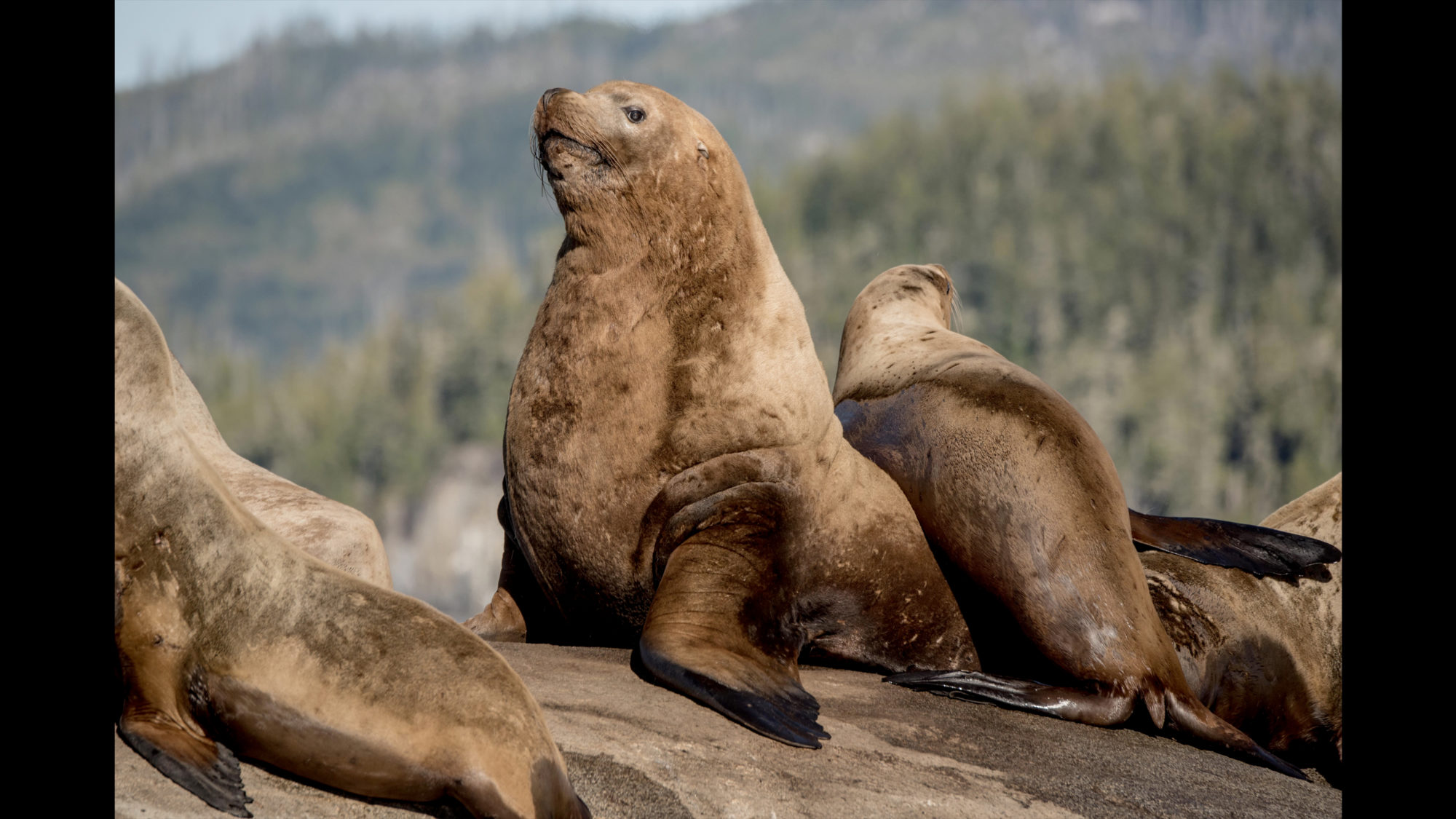 The King of the rock. Photo: Dan Achber 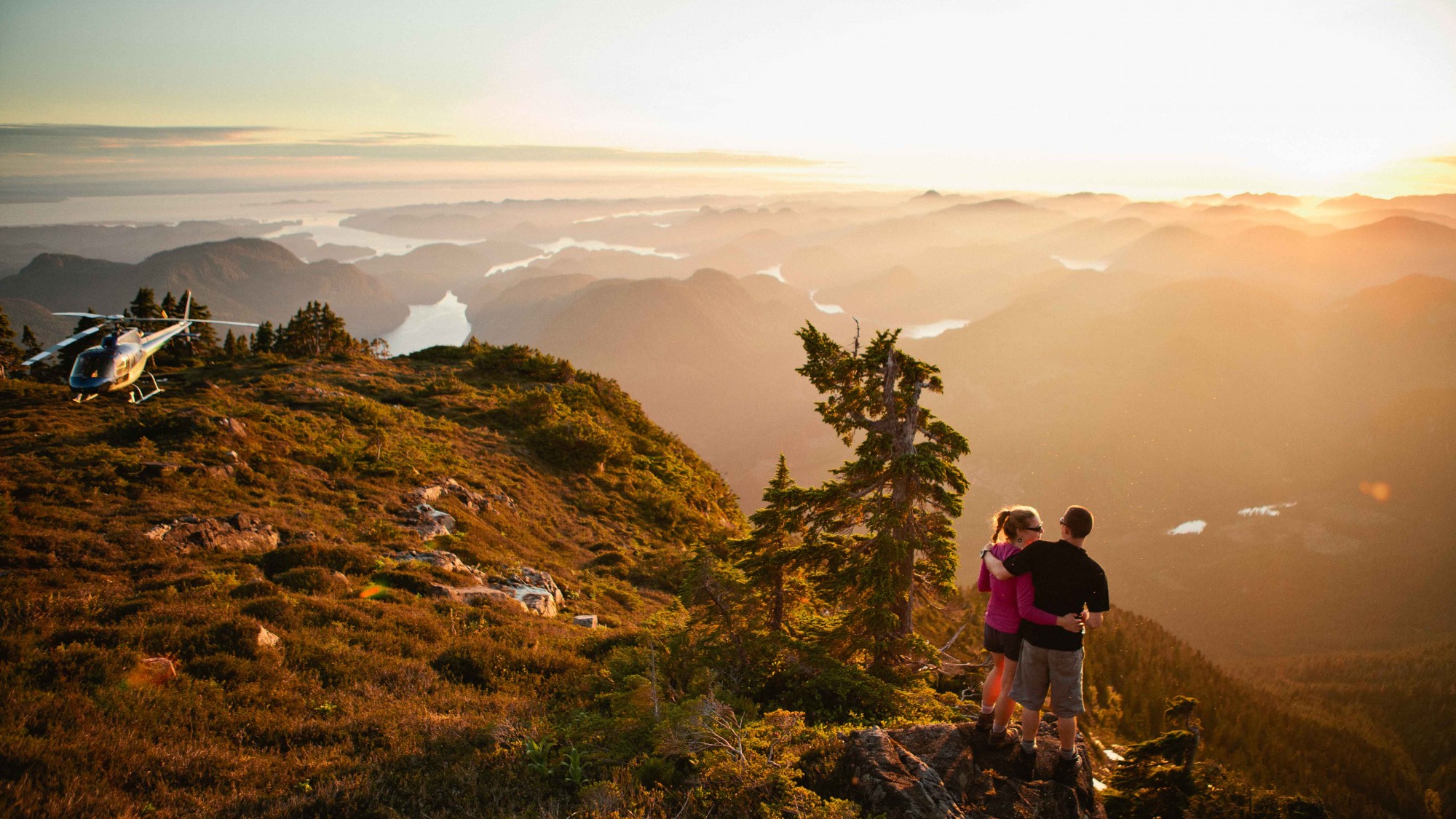 A sunset heli-hike is an amazing way to end your day. Photo: Nimmo Bay 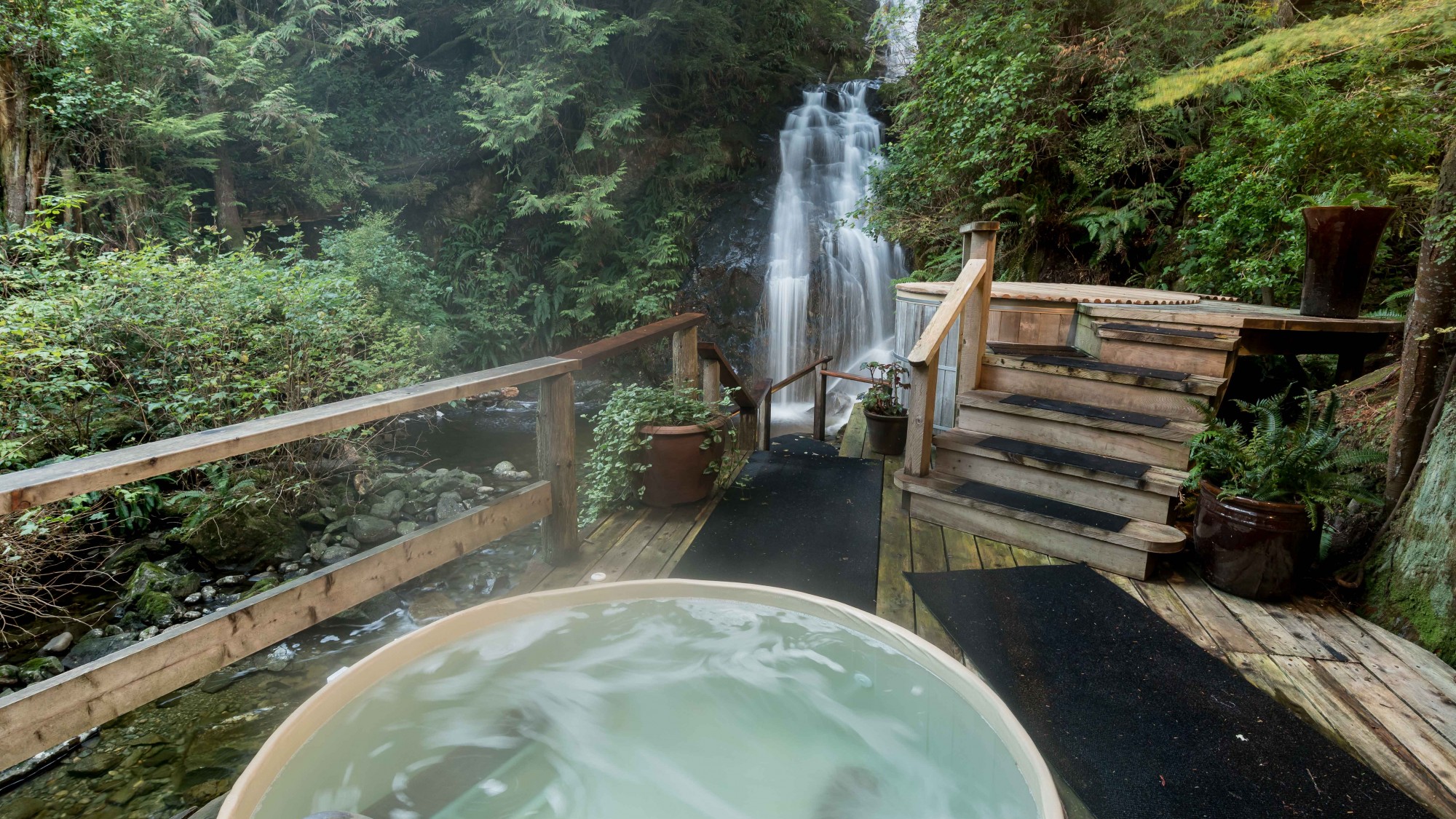 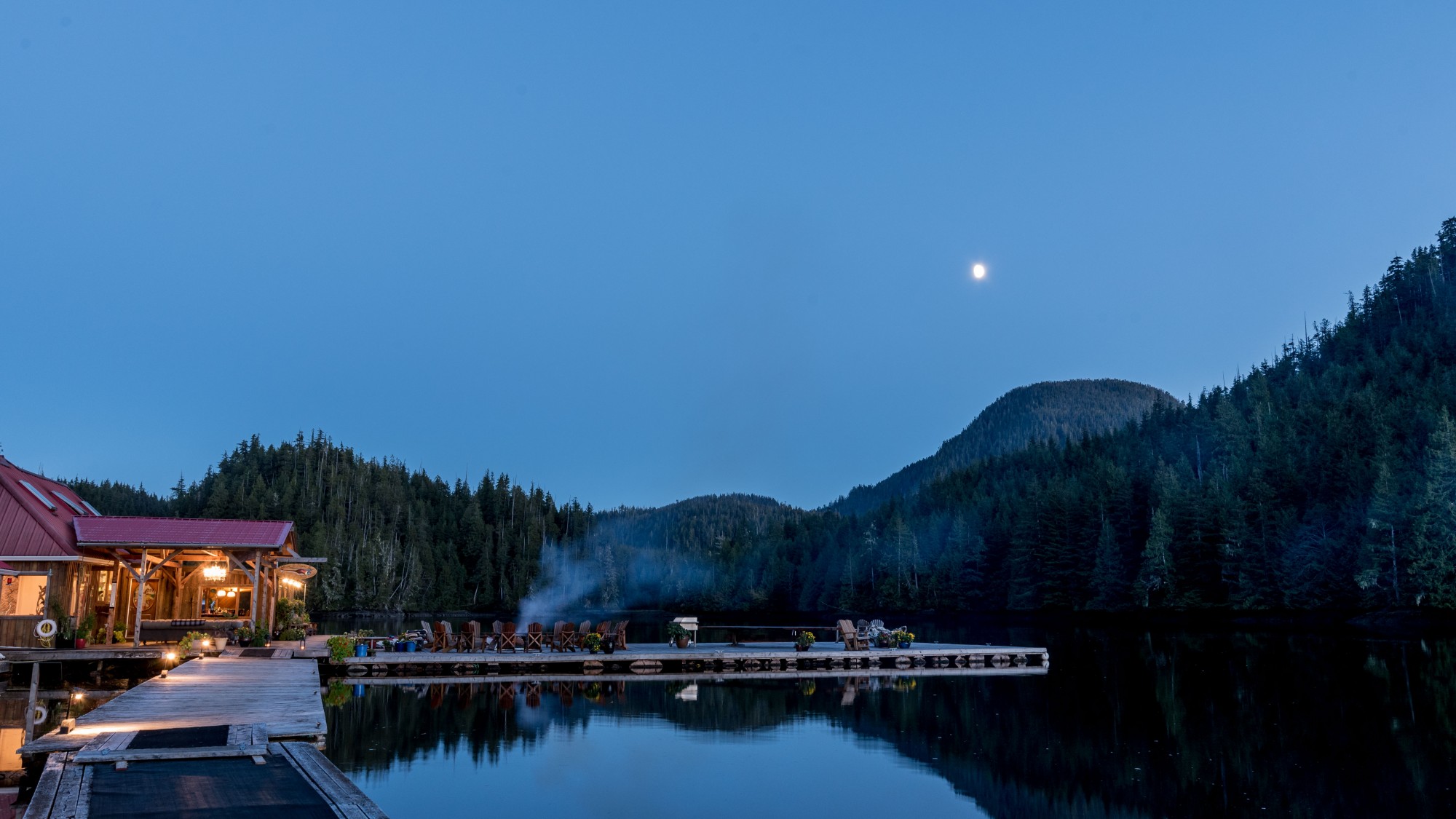 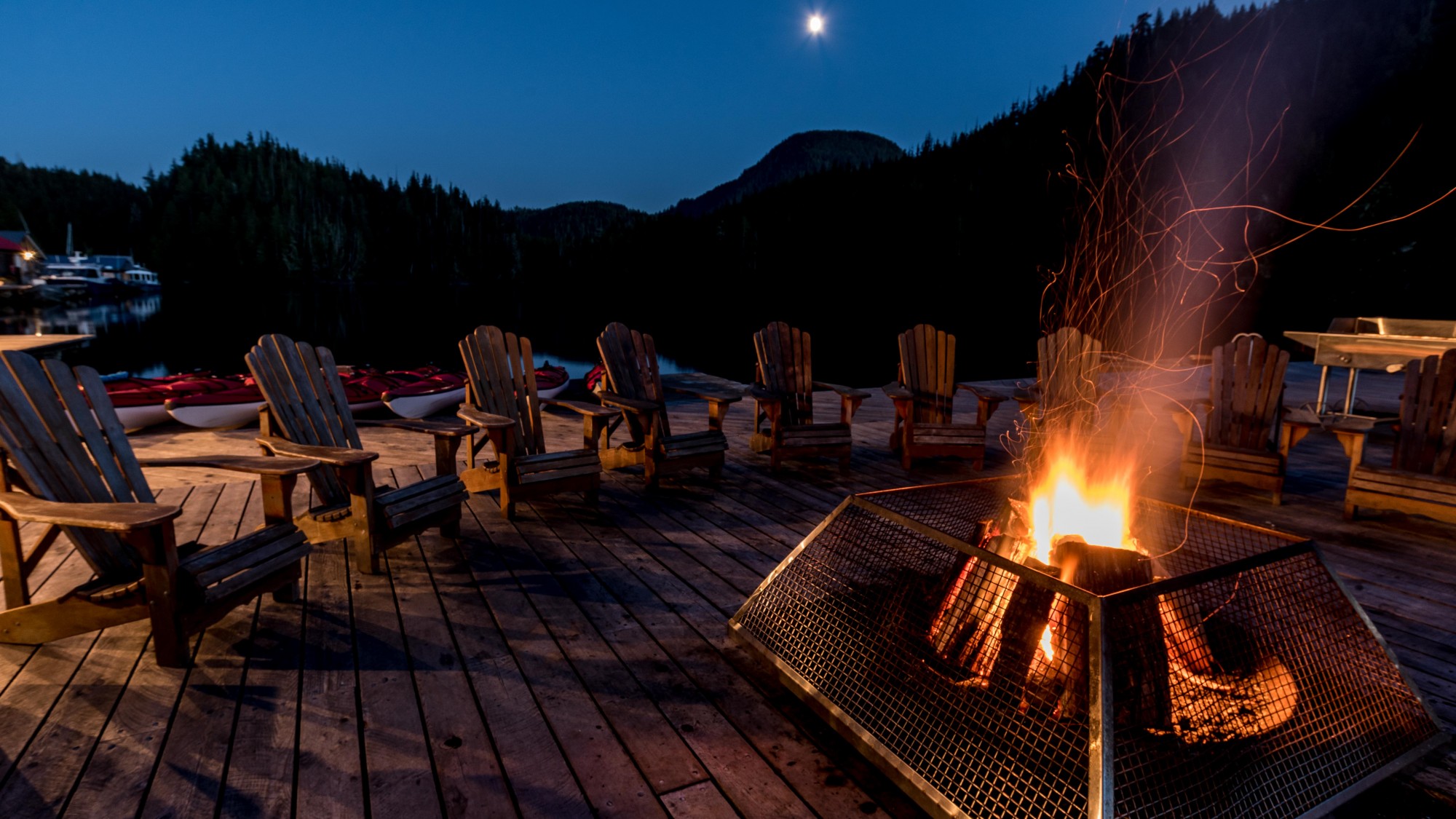 Adventures in the Great Bear Rainforest

If I had to choose a word to describe Canada’s West Coast, it could easily be crinkly. Shaped and scoured by massive glaciers, raging rivers and wild Pacific weather for millennia, the BC coast is one of the more spectacular pieces of wilderness I have ever laid eyes on. This crinkliness has shaped a unique ecosystem with everything adapting to the yearly salmon run. Everything you come across from the smallest bird to the largest whale is here following the fish. The result is natural beauty on a truly epic scale.

Recently I was lucky enough to visit a particularly pristine part of Canada’s western edge, the Great Bear Rainforest. Quite aside from having the second best forest name in the world (the champion being Bwindi Impenetrable Forest in Uganda), the southern part of this immense wilderness is home to Nimmo Bay Resort where I spent 4 fantastic days. Nimmo is nestled into a particularly dramatic crinkle in the coast and is reachable only by boat, helicopter or floatplane. A combination of floating houses and amazing wooden cabins built into the edge of the forest, the lodge is really the perfect base from which to launch your adventure.

My own adventure was decidedly one of firsts: first trip in a World War II vintage floatplane, first bear, first humpback whale. If that sounds exciting, it’s really just the tip of the glacier. The best way to take full advantage of a trip to Nimmo is to have a helicopter at your disposal for at least one day of your stay. It’s certainly not cheap but the freedom it allows is more than worth it. A helicopter suddenly turns 50,000 square miles of otherwise inaccessible wilderness into your own private playground. And, if you can think of it, the guides and the pilots at Nimmo can make it happen. Want to fish for spawning Coho Salmon in a mountain stream a stone’s throw from a 1000lb Grizzly Bear? Done. Feel like hiking a mountain ridge and exploring an ice cave in a glacier? Of course. Want to stand up paddle board on a mountain lake and have a picnic looking out over the Pacific? We thought you’d never ask.

Should you tire of aerial adventuring, you can always hop into one of the resort’s boats and explore the surrounding fjords, to spot dolphins and bears or venture further out into the Queen Charlotte Strait looking for whales. My guide Perry took me out into the Strait and I figured I’d maybe see a whale or two. I didn’t manage to see an Orca Whale but I stopped counting at 25 Humpbacks and 50 Sea Lions – I’m told that it was a really quiet day.

Getting here is slightly involved, but it’s easily worth it. Flying into Vancouver, it’s an hour by regional airline to Port Hardy on the northern tip of Vancouver Island. From there it’s a mere 20 minutes by floatplane or helicopter over to the lodge. Nimmo’s season really kicks off in May as the bears emerge from hibernation and begin to feed, and it runs until about the first week of October when the salmon run ends. It’s a small place but has a big reputation, so plan ahead.

[This article was originally published 9 November 2016]

Dan Achber, as our own resident grizzly bear, is the perfect man to help you plan out a trip to Nimmo and beyond. Email him at dan@trufflepig.com

I stopped counting at 25 Humpbacks and 50 Sea Lions - I’m told that it was a really quiet day.