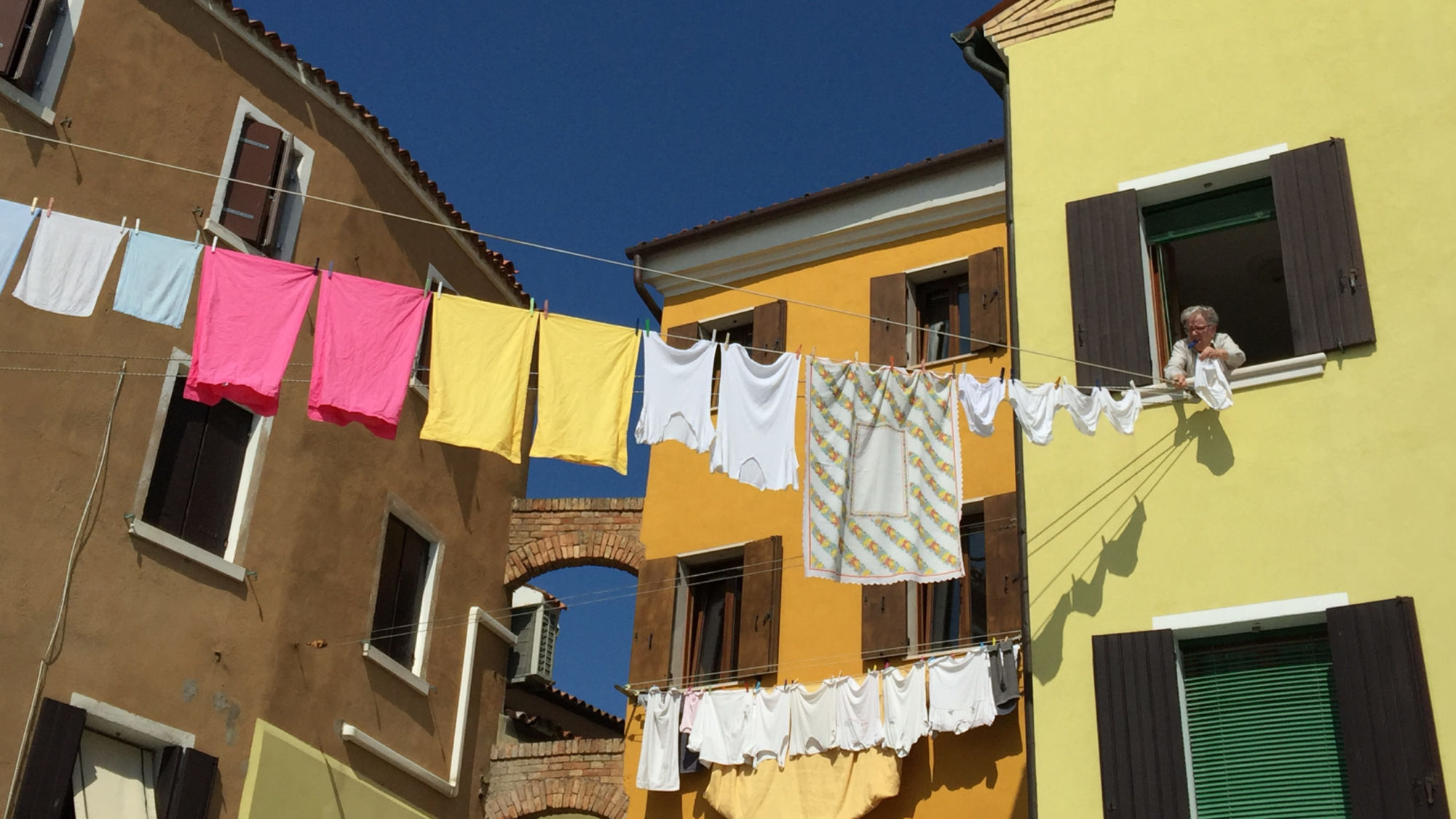 When your laundry out on the line matches the colour of your home
Photographer: Luisa Grigoletto 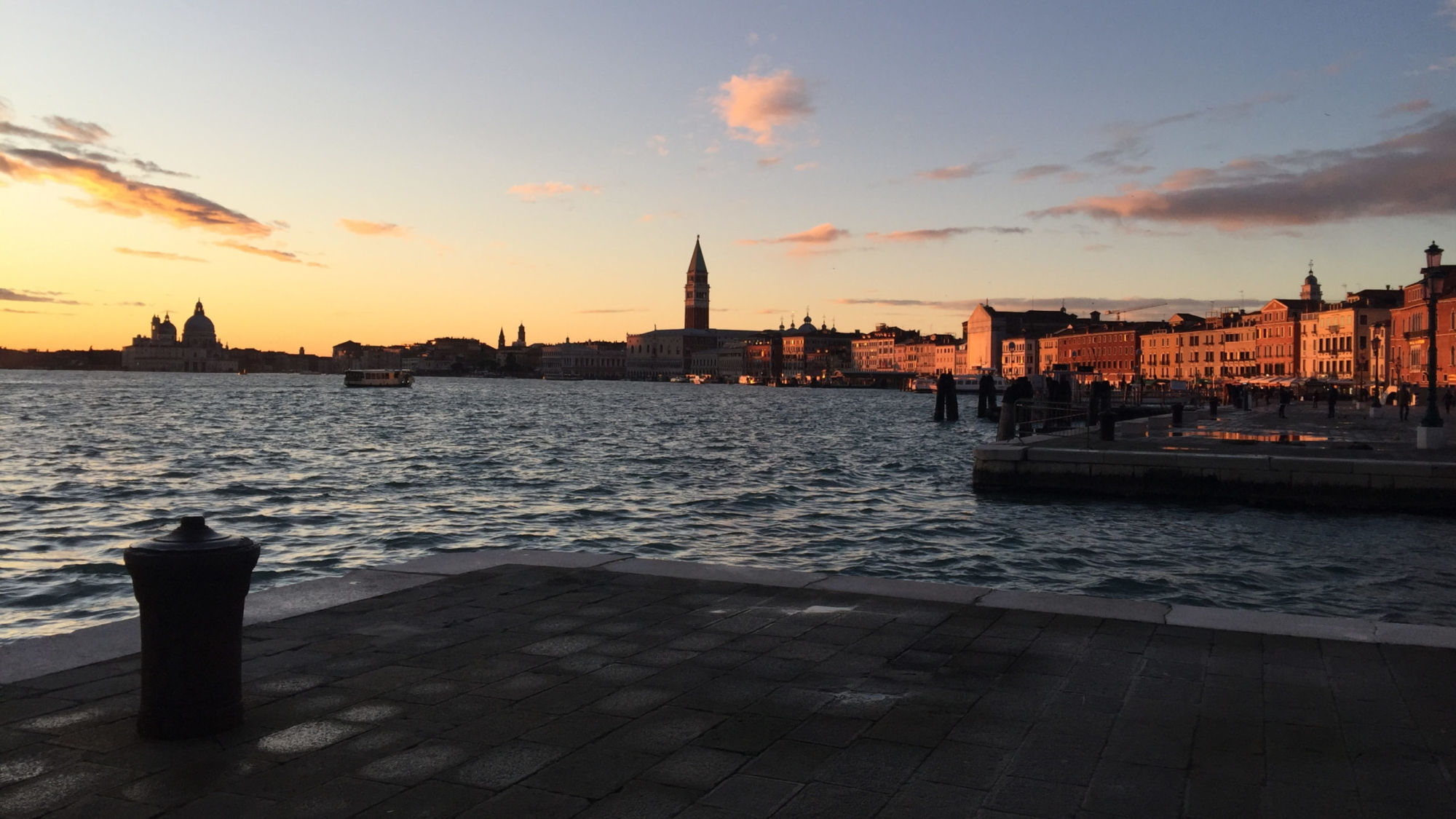 This is one of Venice's tricks to cast her spell on you
Photographer: Luisa Grigoletto 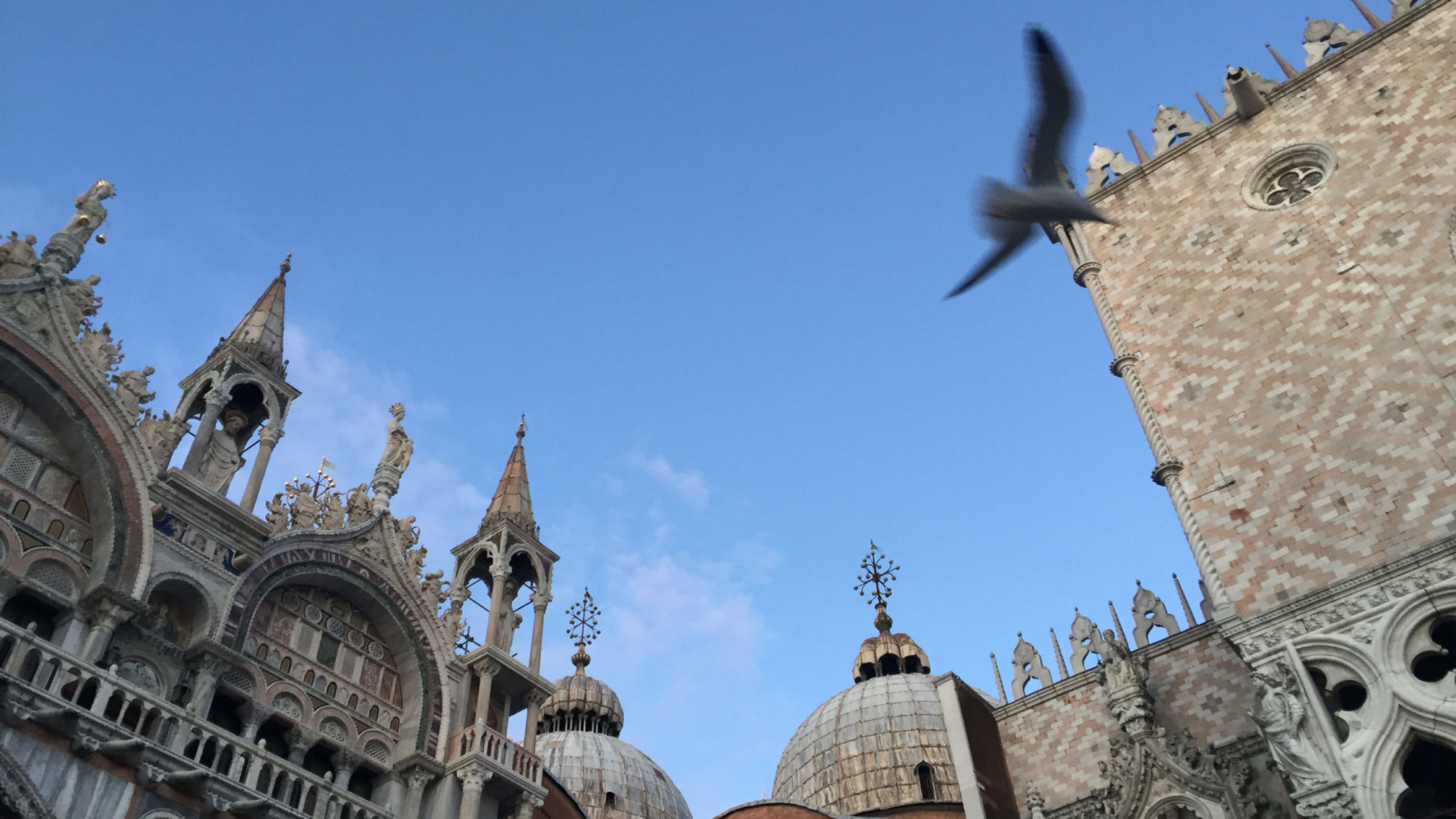 Oh to be a seagull in Venice
Photographer: Luisa Grigoletto 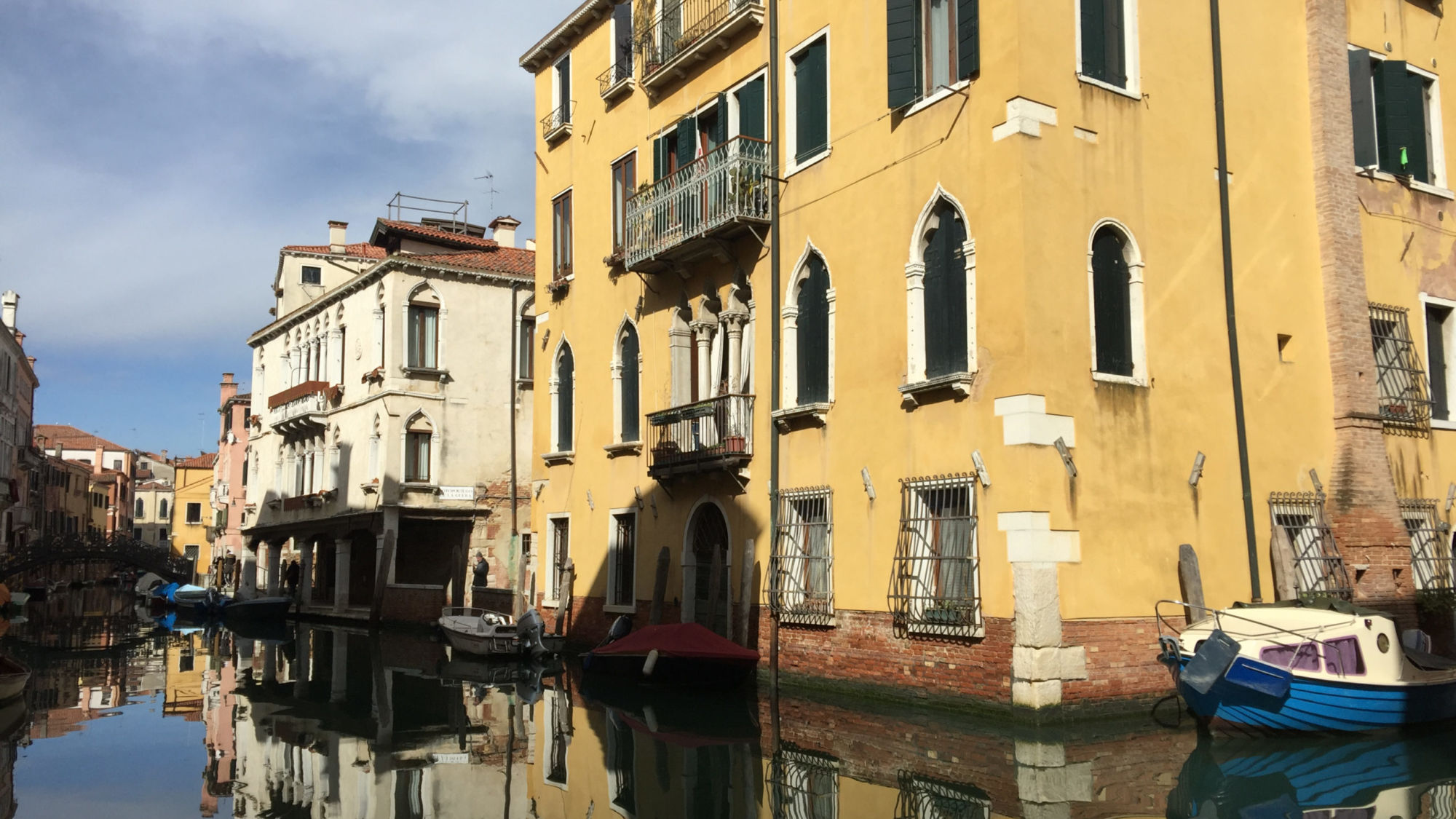 Where is up, where is down?
Photographer: Luisa Grigoletto 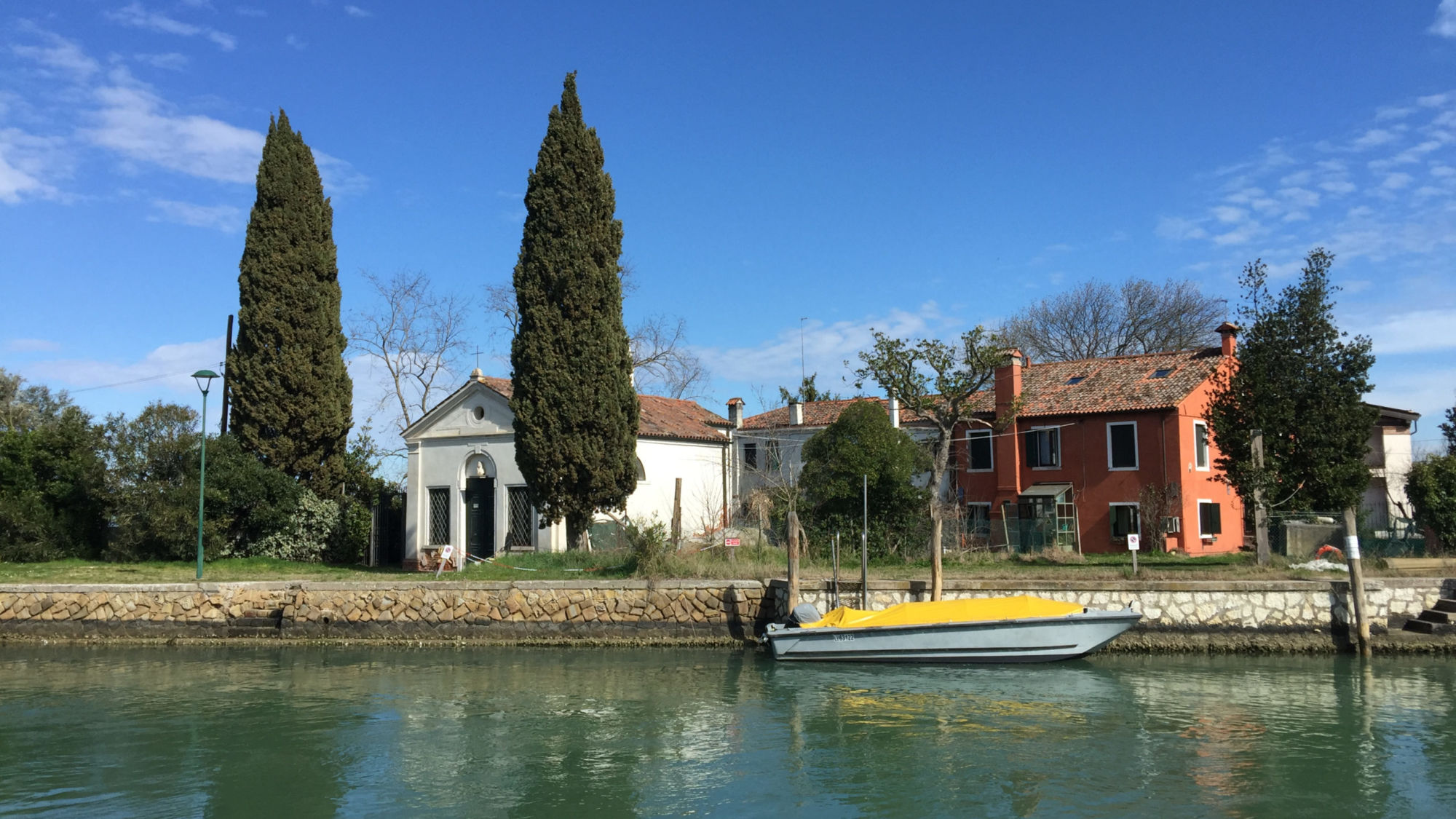 Minimal Venice: a boat, a church, a house, some trees, a canal -- happiness

Swish, swoosh — the oar smoothly fends the water. Quite the statement, the Venetian way of rowing: proudly standing up, and facing forward, eyes into the future.

Swish swoosh, the roar rhythmically breaks the green surface of the lagoon. The pungent smell of salt and shallow marshes. An island here, another there, and more as far as the gaze can reach, to the very edge of the lagoon. San Servolo, Sant’Erasmo, San Michele: saints from the East and the West scattered in the water. The core of Venice in the middle, at the centre of its lay universe.

Venice, a city founded by refugees, who eventually turned into powerful merchants. A place of passage, where bridges physically connect two shores but also two universes: a door open on different dimensions and welcoming to other cultures. San Lazzaro — a safe haven for the Armenian community since the 18th century. Venice, ‘the hinge of Europe’.

A city of contrasts, defended and at the same time threatened by water, constantly shifting between land and sea, land and sea. The tide goes in, the tide goes out, twice a day, since the dawn of time. An incrustation of sand and clams, traditions, fears, dreams, and ambitions, old and new. A city of darkness and light, literally and metaphorically. A hodgepodge where plague, insanity, scandals, and wars mixed with thriving commerce and flourishing arts. Walking through its dimly-lit alleys at night takes you back at least 100 years. When you get to the border and look at the point where the sea meets the sky, you’re staring into a dark abyss. Laundry hanging on the lines outside, fluttering as if it were Tibetan prayer flags. Boats glimmering in the distance, on the silver sea. The glitter of the gold mosaics, the warm candlelight bouncing off of them, the silence of a cloister wrapped in thick mist.

Splish splash — the waves gently ricochet on the side of the boat as you attend a nightly projection of a movie. Splish splash, the spritz poured generously at any hour of the day, red, orange, deep brown. A side of cicheti, frittata with moeche (soft-shell crabs), risotto with gò (goby fish), creamed cod and white polenta, as you watch the cranes flying over the lagoon on their migratory path northbound in the crisp spring weather.

A city built on a forest of stilts plunged into the mud. A city of paper, whose archives, at the apex of the Venetian Republic, were among the most detailed in the world. And it makes sense that this is the place that humanist Aldus Manutius – a pioneer – chose at the end of the 15th century to found his publishing house and give birth to the book as we know it. Venice, a monument to knowledge for all humankind. Quite fittingly to our time, his motto was Festina Lente, or “make haste slowly”.

Atension! – Look out, in Venetian dialect, but also pay attention, the warning ever resounding through the narrow calli of Venice, where the locals whizz at light speed, never in a straight line, trying to get you out of the way as fast as possible. Venice is a labyrinth, where the dead-ends and the twisted turns are just as important as its main roads. It’s all just a matter of finding your own thread. Is there a beginning? Is there an end? Where do we go from here?

Such a cluster of images and suggestions crowd my mind as I sit here plotting my next trip. It has to be Venice, it couldn’t be anywhere else — its gravitational pull is quite irresistible for me. Already in 1605, writer and philosopher Giovanni Botero defined Venice as ‘the summary of the universe’, because of its ability to mirror the intricacies and the wonders of the world, as if it were a microcosm. As for Italo Calvino’s Marco Polo, so for me there’s a piece of Venice in each and every city of the world, and possibly way beyond the edges of this pale blue dot of a planet we inhabit, to the edge of the universe and back.

So for sure there will be rowing on a traditional shallow-bottomed wooden boat (a batelina, or a sanpierota) through the city’s tight canals, standing up, proudly, eyes and body all projected into the future. Where do we go from here? Slowly, yet decidedly forward, with caution and excitement — festina lente, indeed.

Ground control to Major Lu — we detected that your tin can is floating in the most peculiar way towards the Venice space oddity. Can you hear us, Major Lu? Email her if you’d like to discuss cosmic plans.