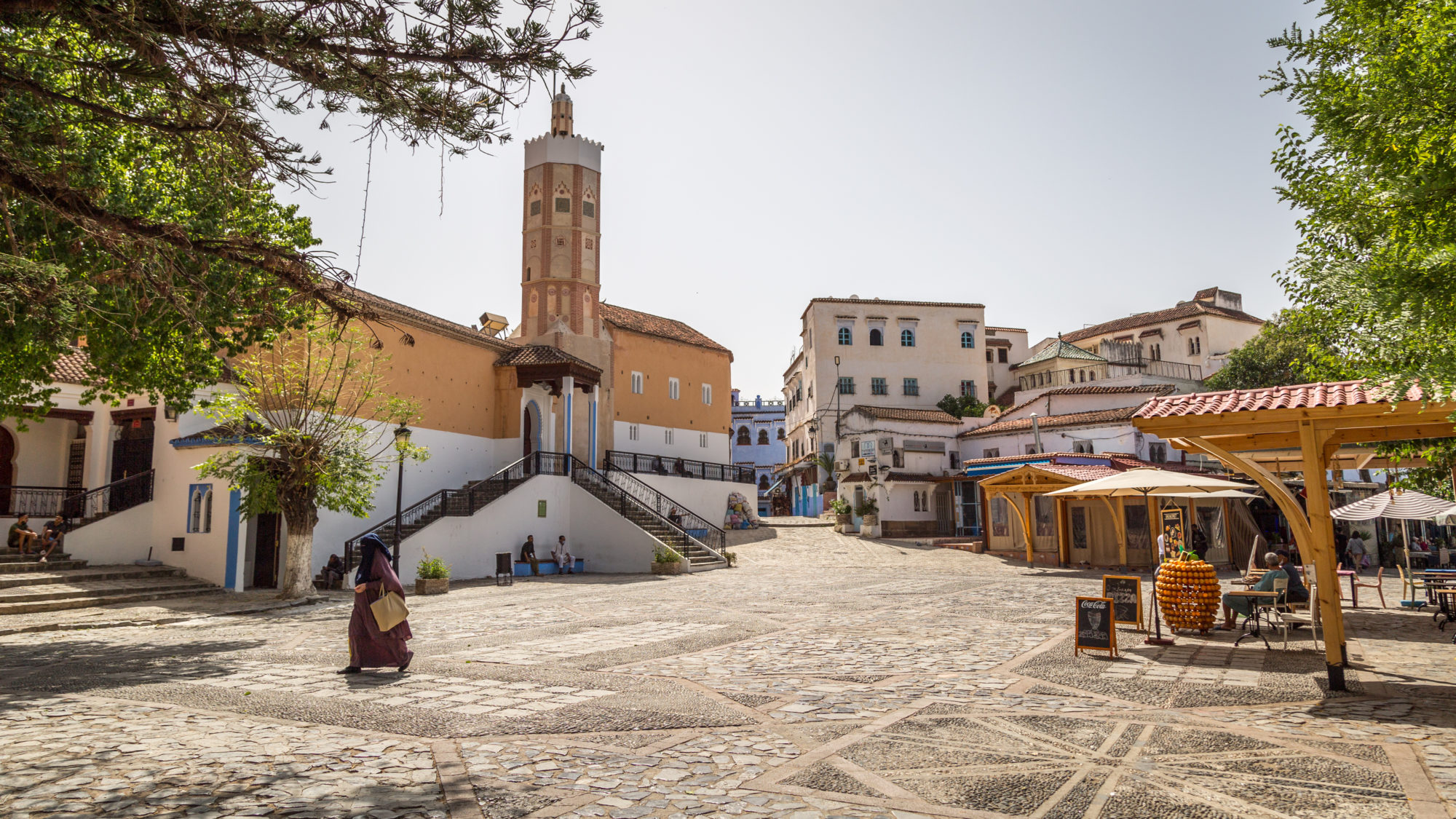 Chefchaouen at 11am on a September day in 2020, the Year of Our Pandemic. The shuttered businesses and deserted feel underscores the fact that much of the traditional housing in Chefchaouen's Medina has been converted to hotels and B&Bs for the now non-existent tourist trade. Photography: Sebastian Lapostol 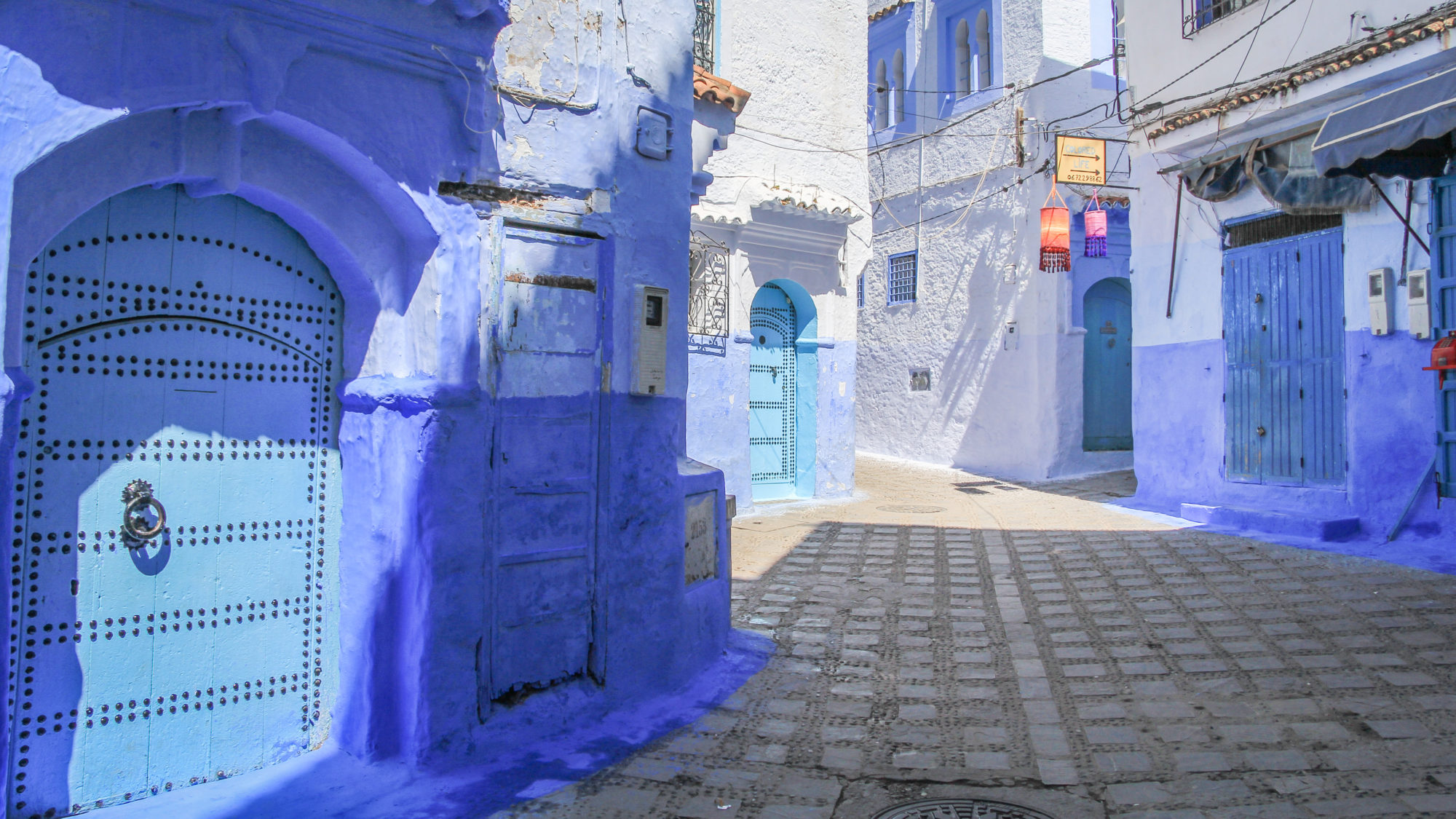 And out of the blue, the absence of tourism has brought empty streets and an uneasy peace to the town. Photography: Sebastian Lapostol 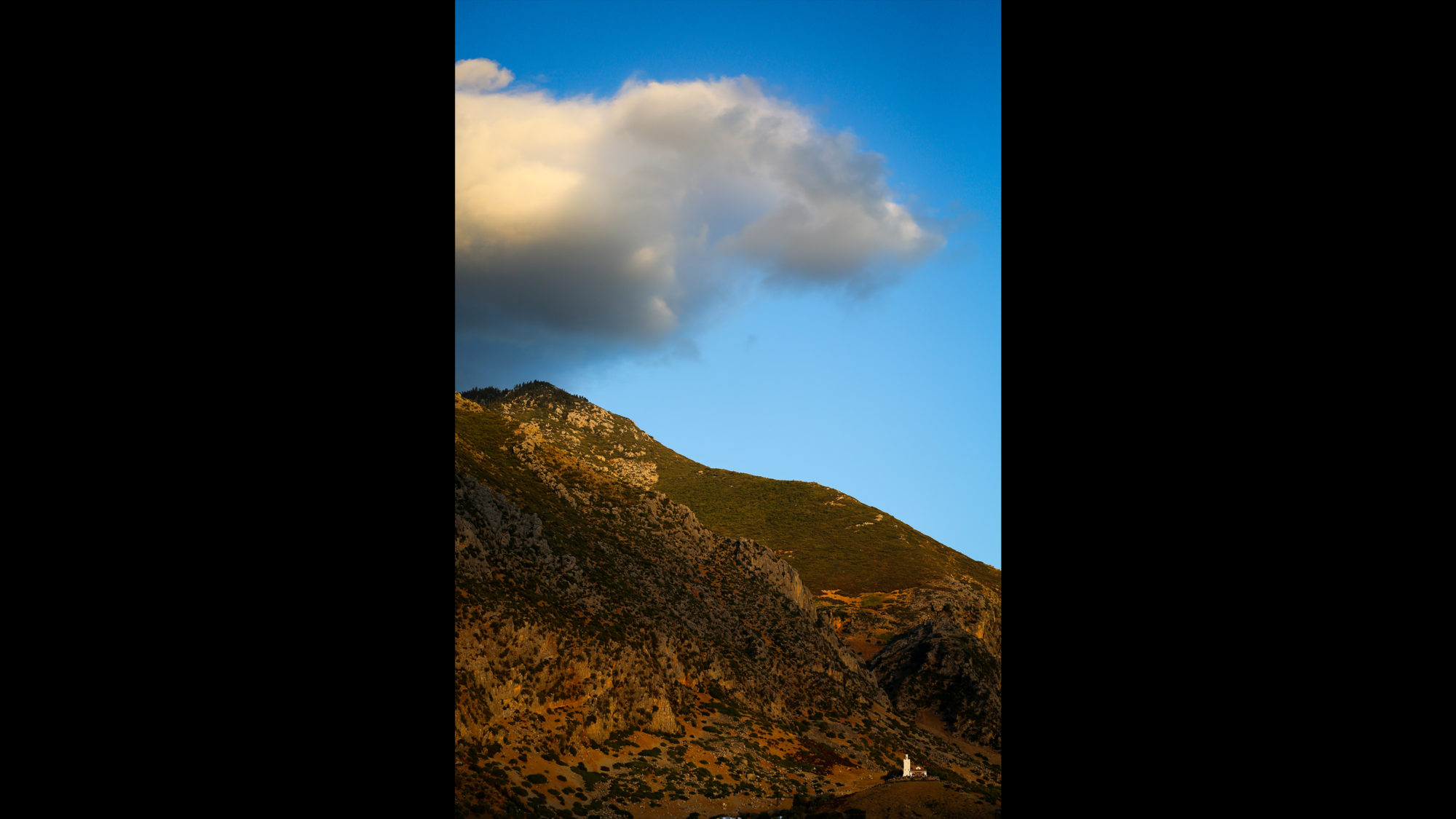 The Rif mountains have shielded Chefchaouen from the outside world for centuries, and today provide some of the best walking in Morocco north of the High Atlas. Photography: Sebastian Lapostol 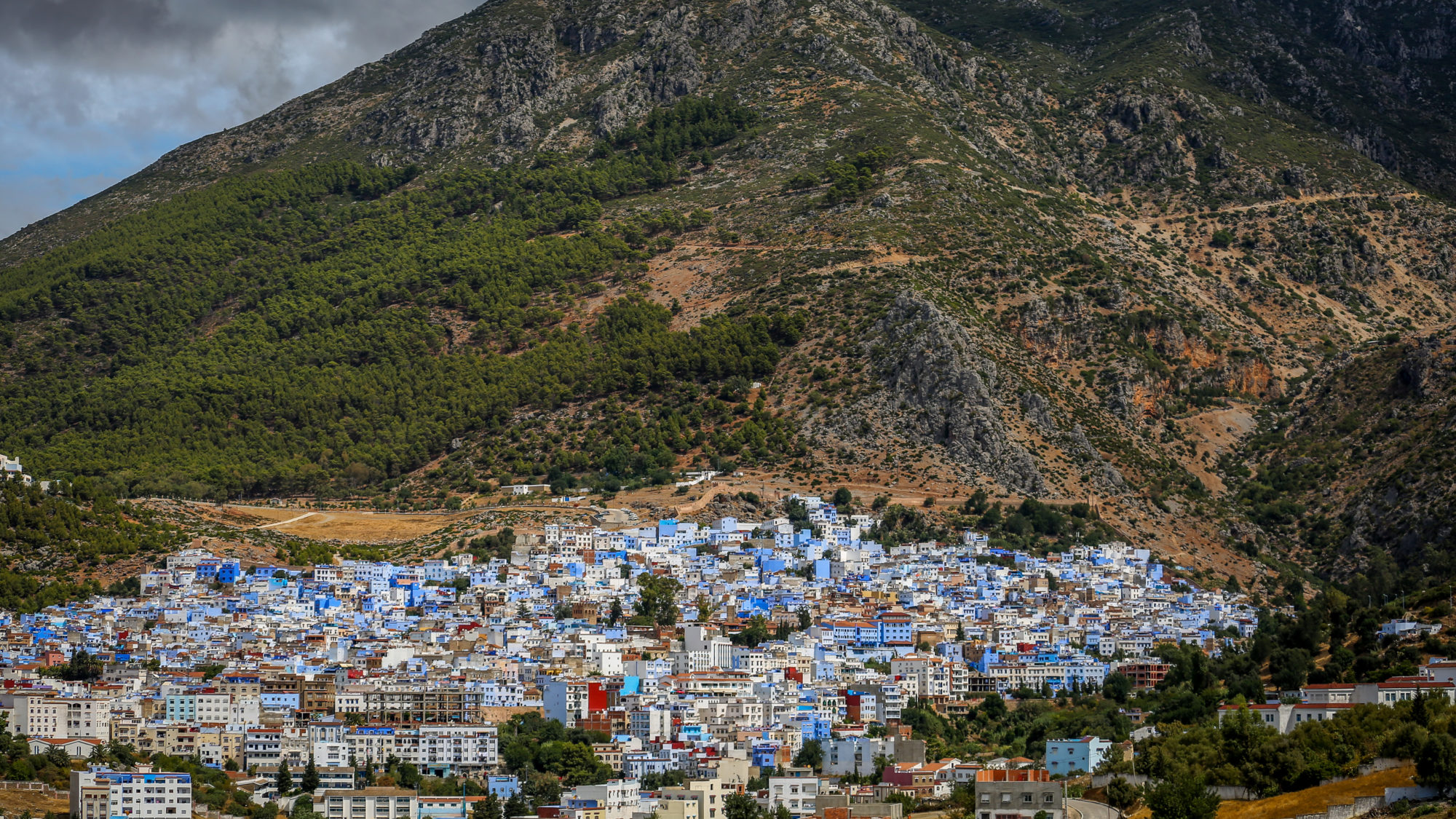 Chefchaouen in the Rif Mountains, of Morocco, "the postcard view". Photography: Sebastian Lapostol 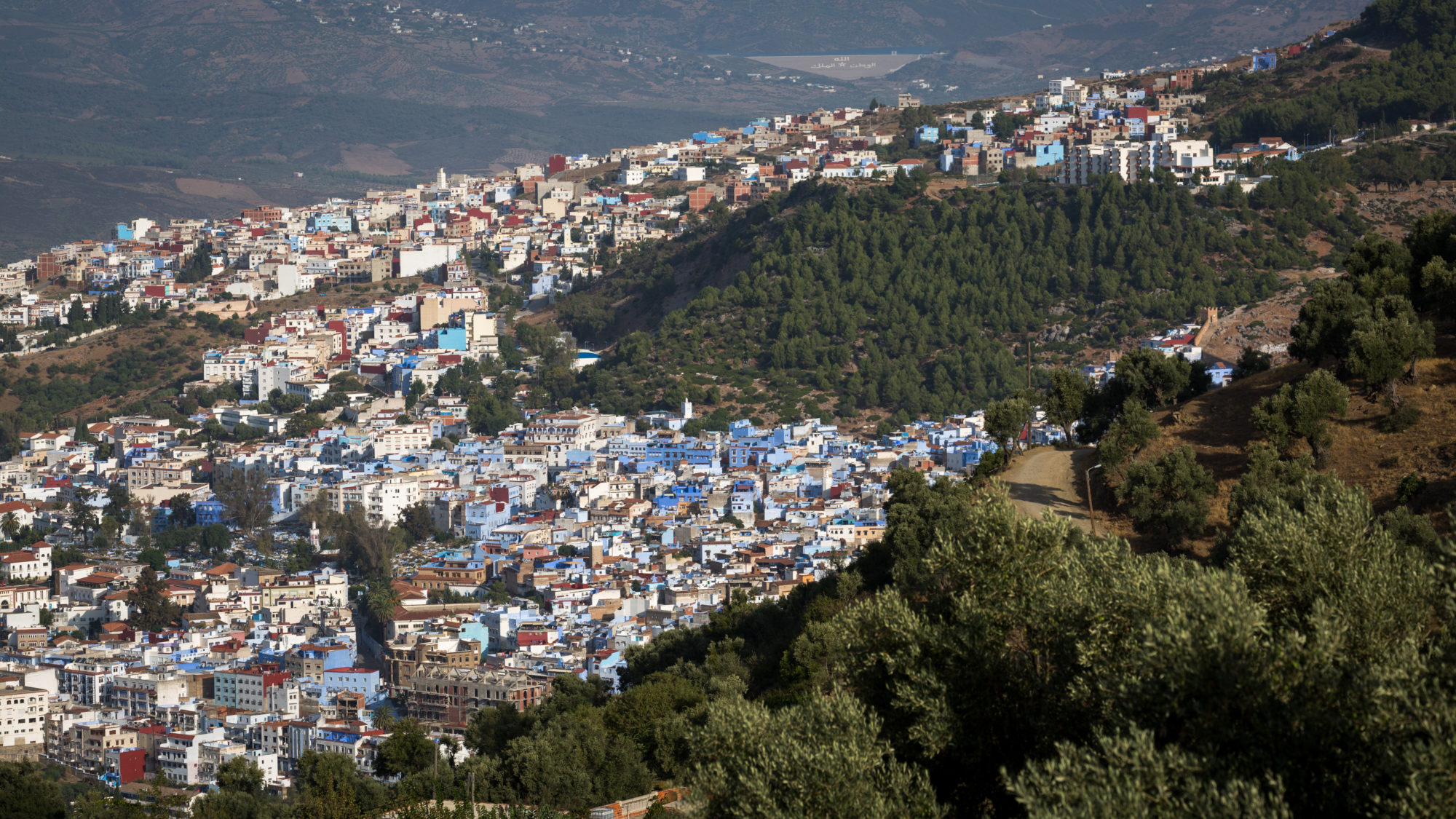 Pull the lens back and you'll see Chefchaouen has exploded beyond its traditional walls in a matter of just a few years. A certain indicator of some of the prosperity tourism brings, as well as the negative effects of urban sprawl. Photography: Sebastian Lapostol 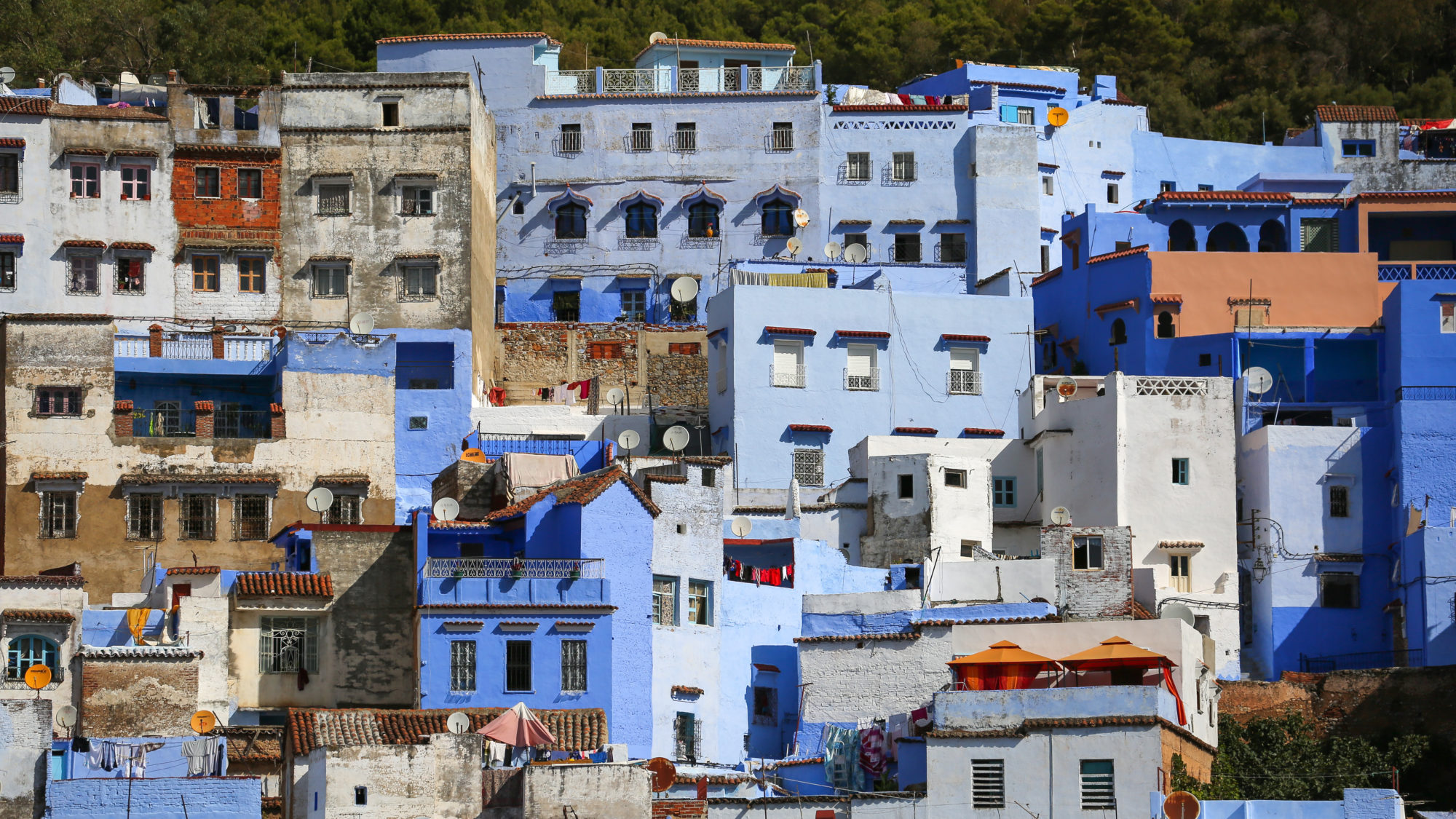 No doubt that the topsy-turvy Chefchaouen Medina is made all the more colourful with its fifty shades of blue. In actual fact, it is only relatively recently that blue was so prominently splashed across Chefchaouen's façades, and the little there used to be was always the lighter shades. Photography: Sebastian Lapostol 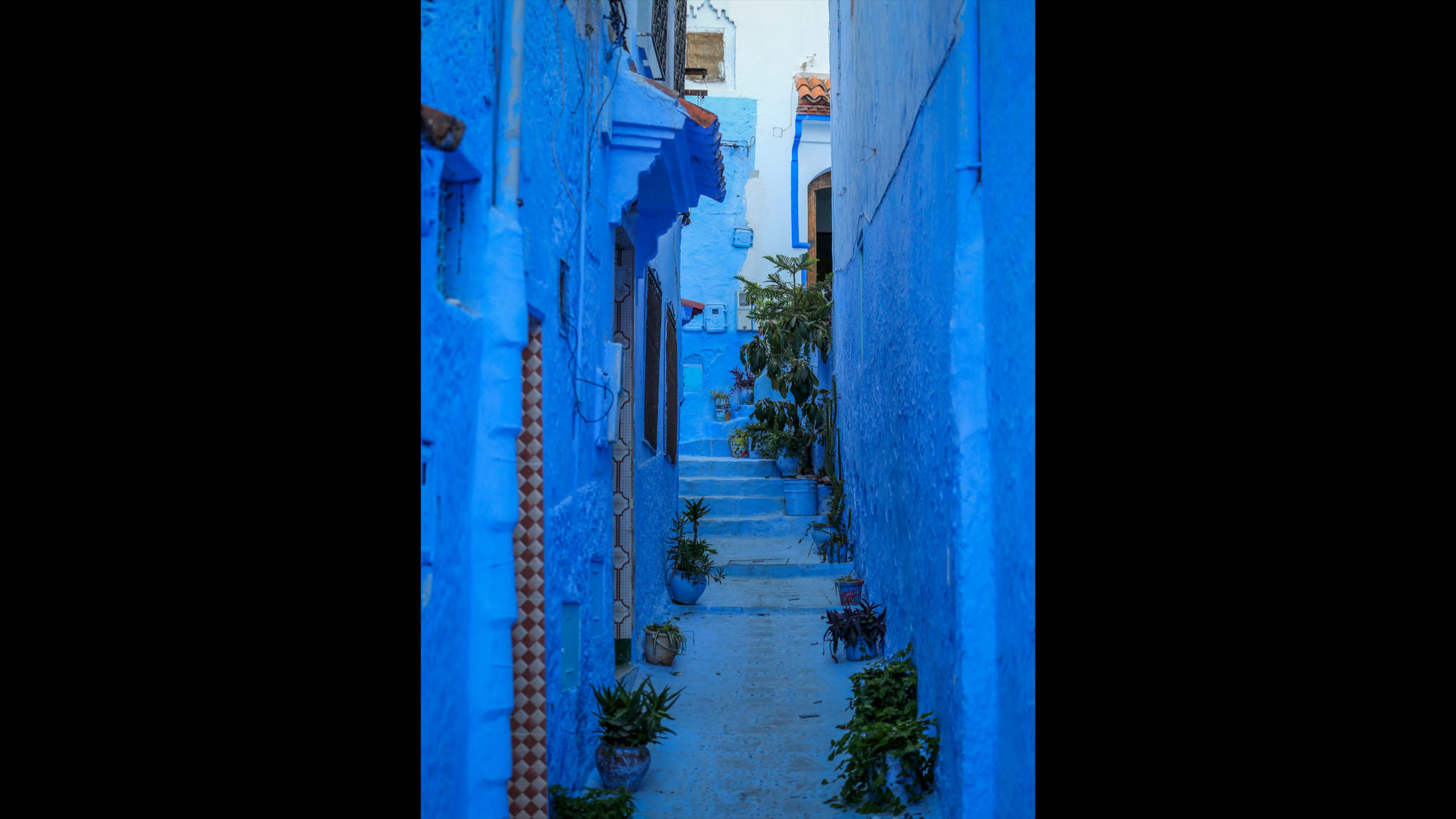 A blue alley right out of a Smurf village. Photography: Sebastian Lapostol 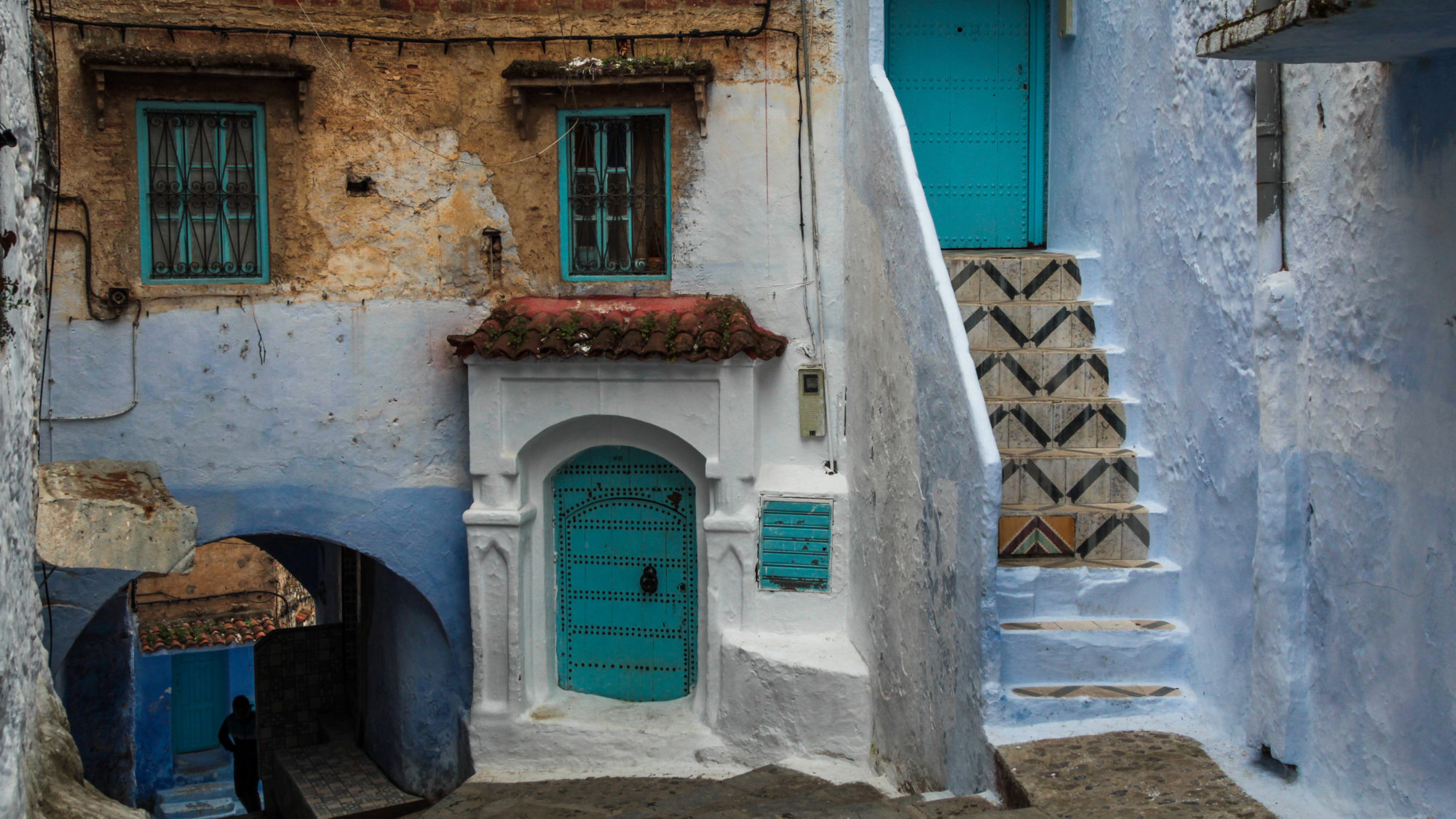 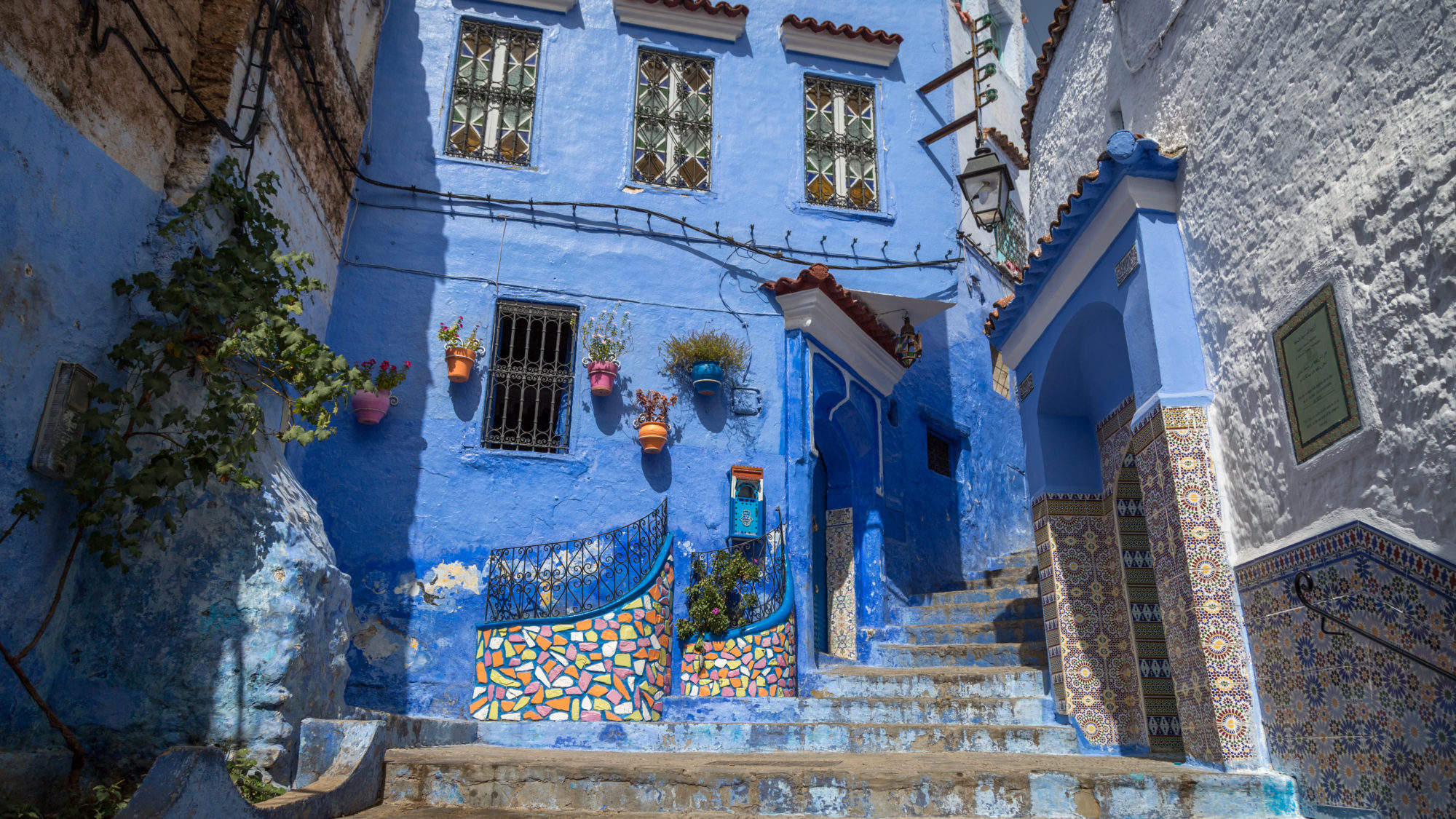 Anywhere else on a given day, this is just another alleyway of a moorish inspired town. Slap some blue paint and you get lines of people waiting to have their photo taken on these steps. Photography: Sebastian Lapostol 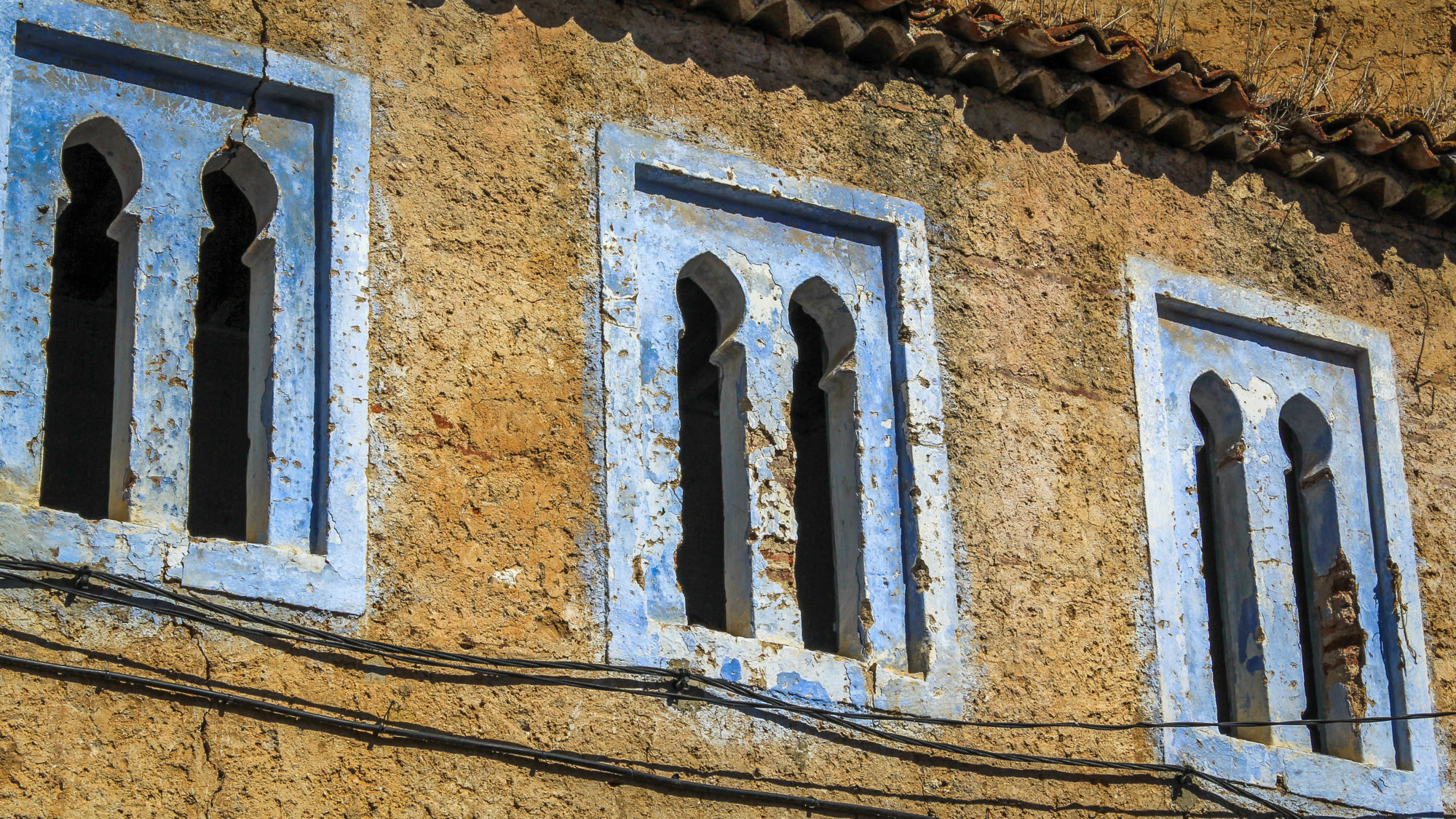 Anyone who has spent some time in Andalusia and the "pueblos blancos" will recognize the architecture of Chefchaouen, which drew its inspiration from the thousands of Andalusian Jewish and Muslim refugees who populated the town in the late 15th century. Photography: Sebastian Lapostol 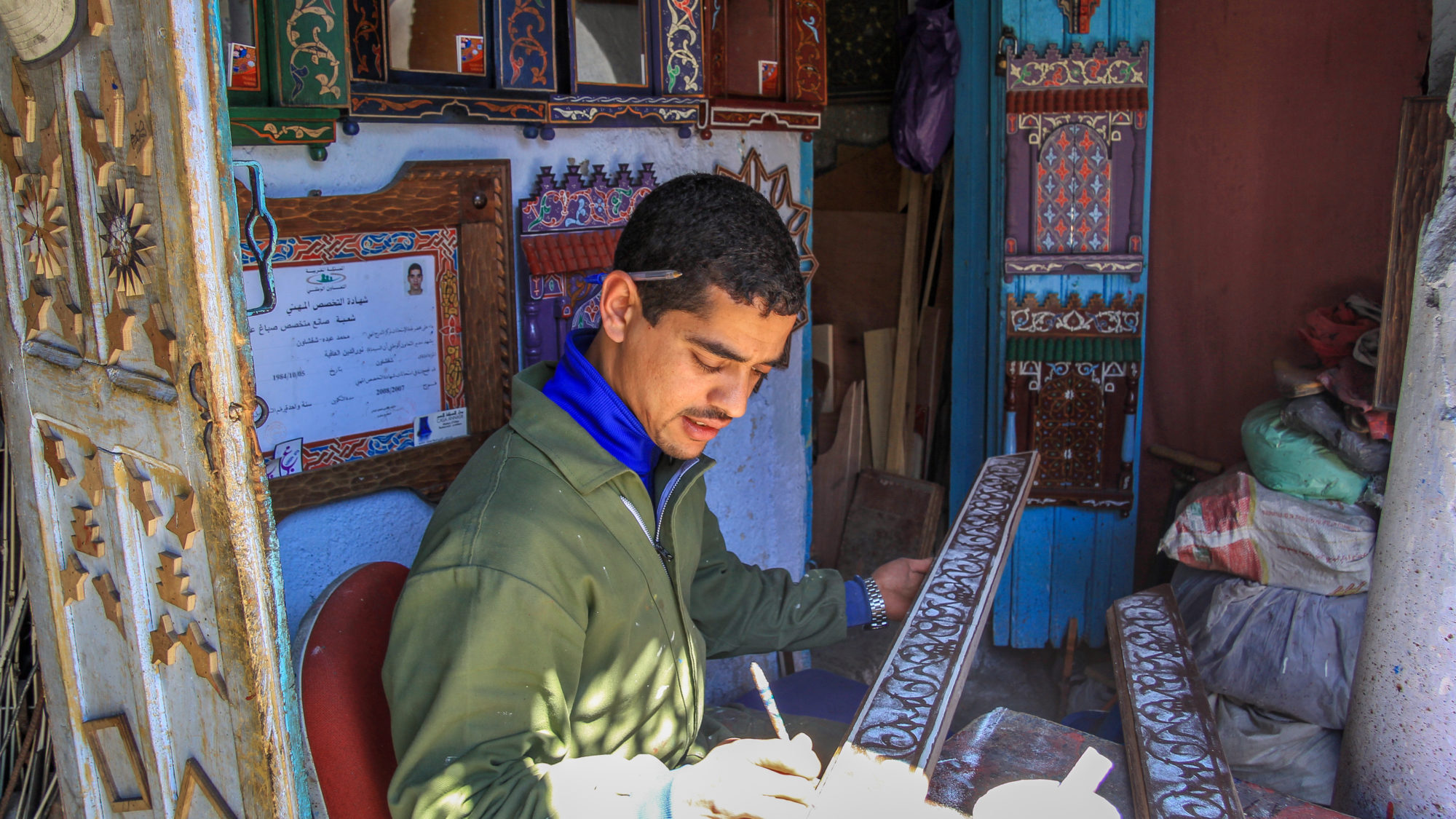 Chefchaouen is actually noted for among other things, excellent painted woodwork. Here local artisan Nourredine works patiently on his craft, and actually loves chatting with locals who can pull themselves away from their Instagram bucket list. Photography: Sebastian Lapostol 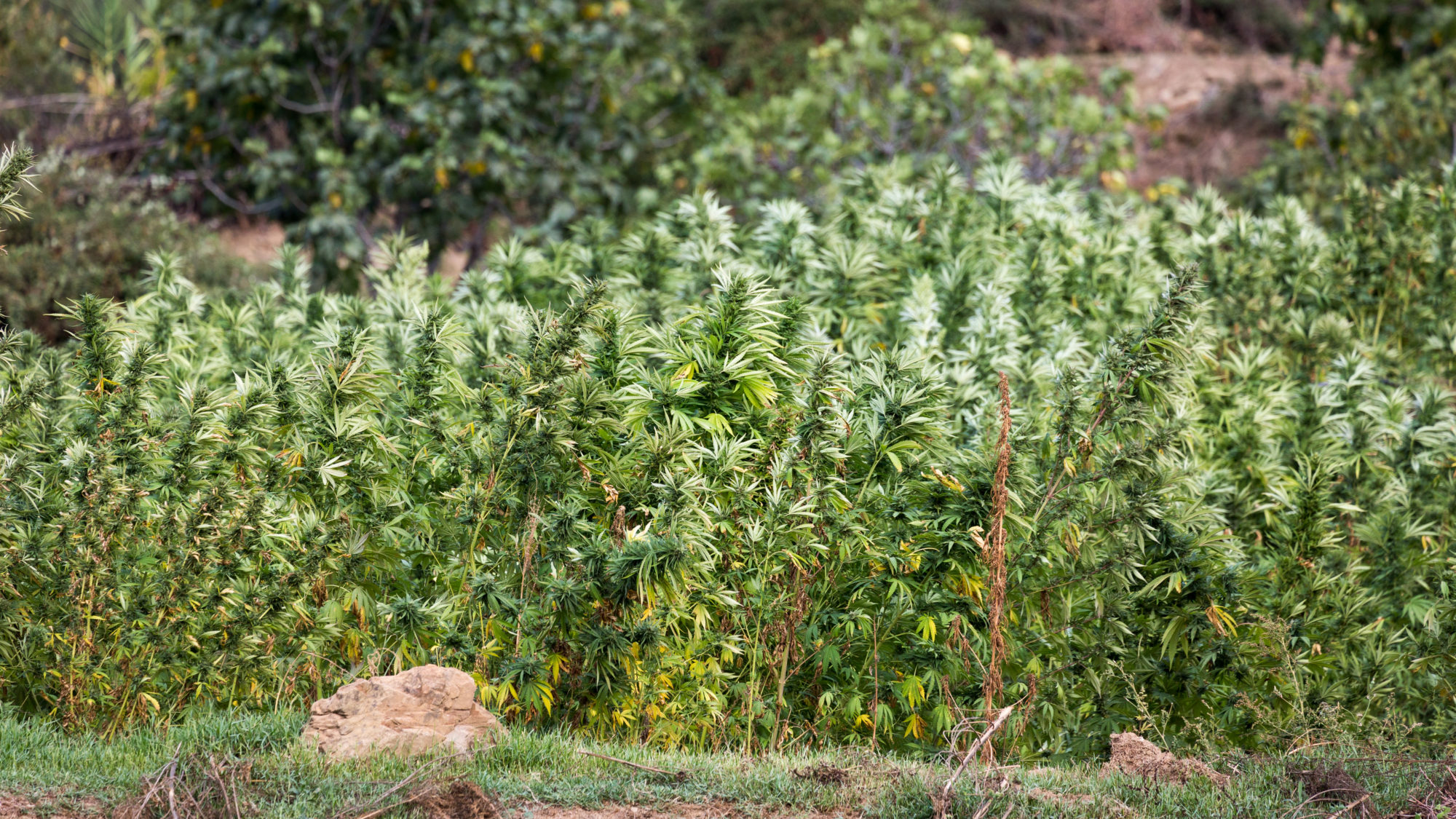 "The evil weed", and Morocco's infamous cash-crop, in the hills outside Chefchaouen. Many Rif area farmers actually depend on cannabis cultivation for their livelihoods, which goes some way to explain why the authorities look the other way and allow it to thrive. Photography: Sebastian Lapostol 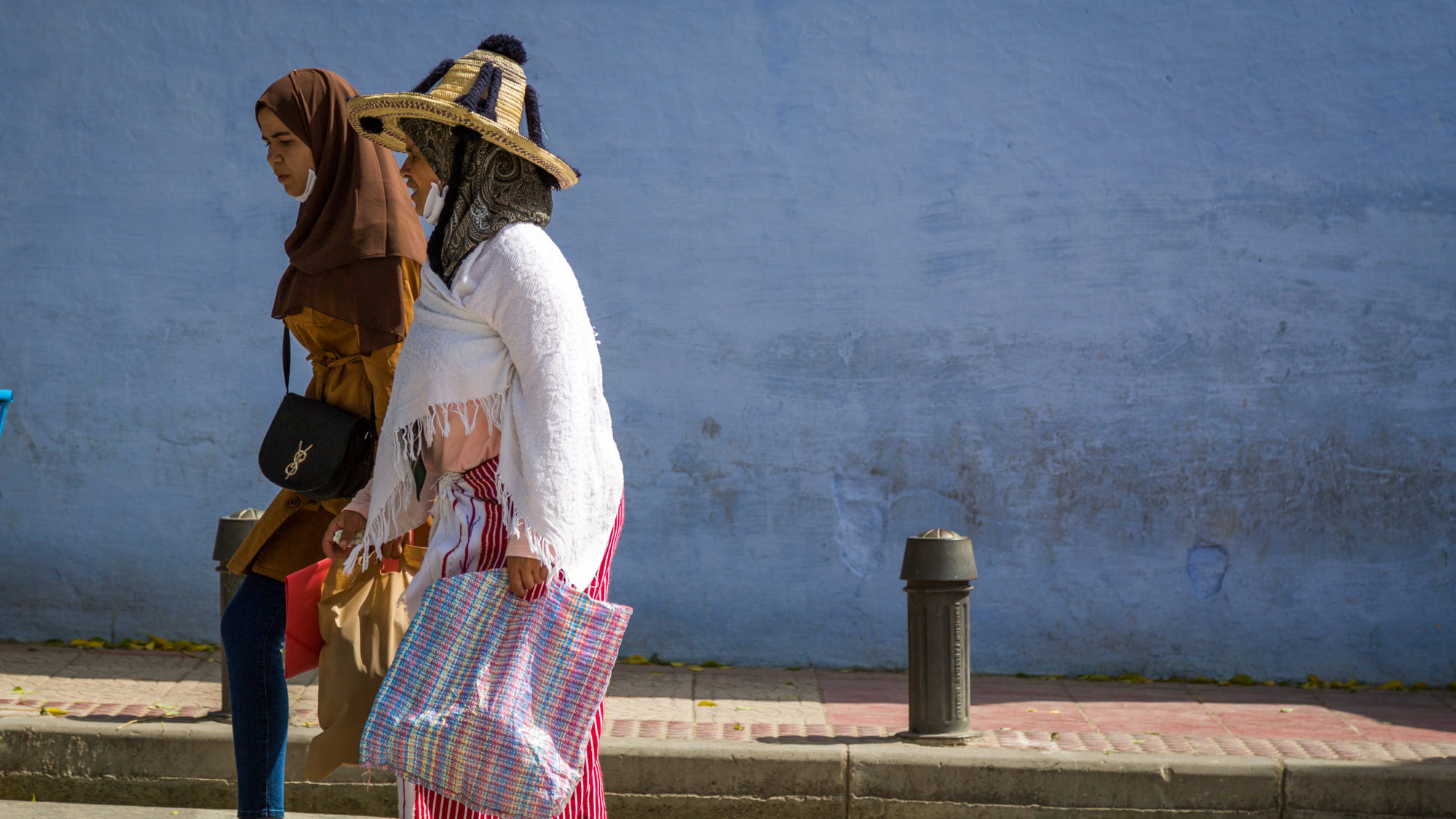 Modern and traditional are blends that one sees in daily life everywhere in Morocco, including on the streets of Chefchaouen. Photography: Sebastian Lapostol 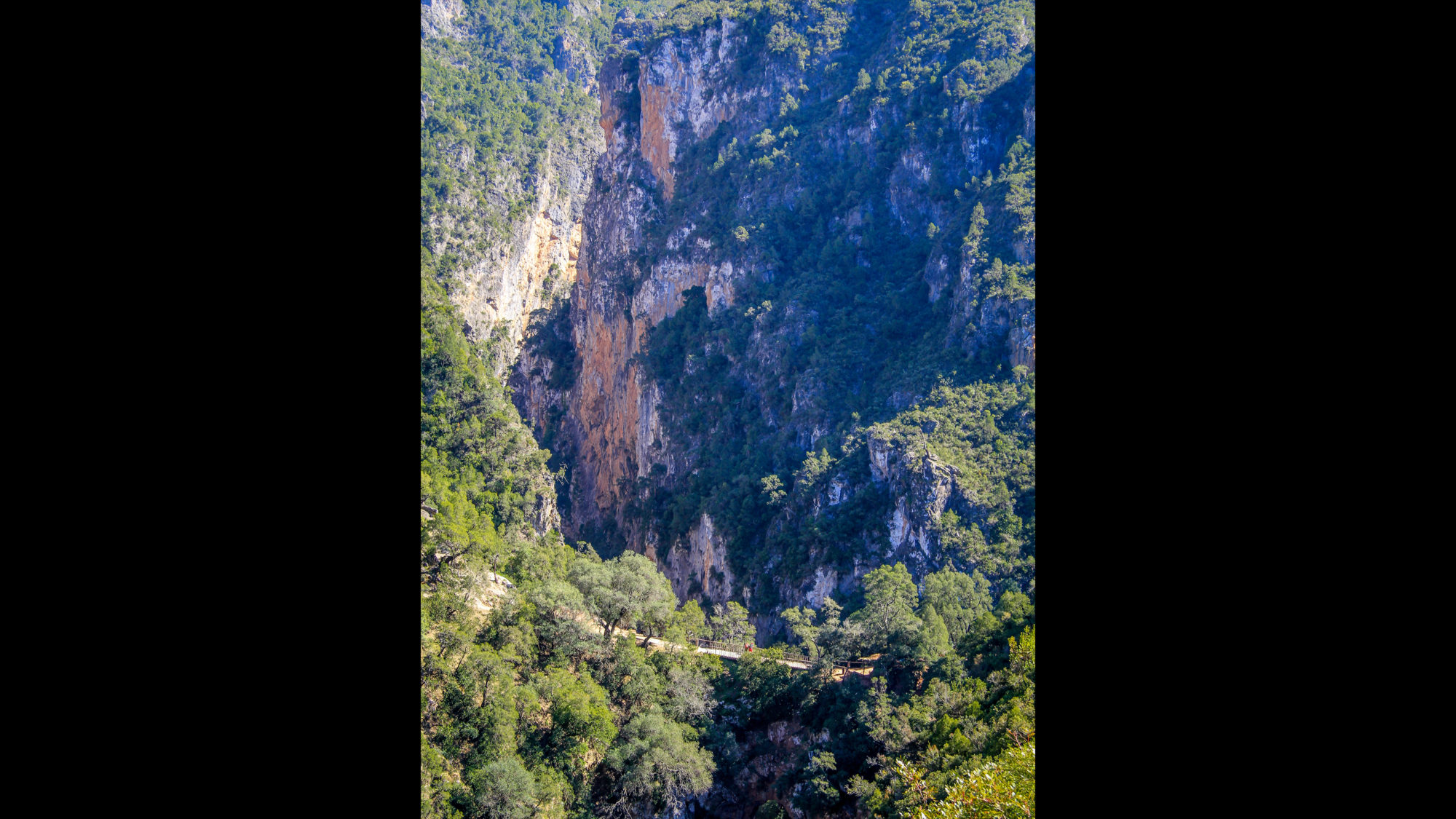 The bird's eye view of The Bridge of God, a fantastic hike near Chefchaouen in the Rif. Photography: Sebastian Lapostol

You may know Chefchaouen already, but under a different name: Xauen or Chaouen among others. Or perhaps you’ve seen any one of the millions of photos of it on Instagram, “The Blue City” or “The Blue Pearl” being some of the confoundingly inaccurate nicknames for Chefchaouen that I suppose sounded good to some PR folks years ago, and somehow stuck.

Tucked in away in the Rif mountains of Morocco, Chefchaouen’s history is rather remarkable for such an unassuming town.  Moulay Ali Ben Cherif founded the town in the 15th century as a base from which to attack the nearby Portuguese in what is now Spanish Ceuta.  Soon after, Muslim and Jewish refugees from the Granada region of Spain settled in droves, fleeing persecution. Thanks to isolation afforded by the surrounding Rif mountains, the population continued to speak a medieval dialect of Castillian Spanish, and Chefchaouen remained an enigma to the outside world for centuries.

Until Spanish armies invaded the Rif in the 1920s (part of their campaign to colonize the north of Morocco as their “protectorate”), only a small handful of outsiders had ever stepped foot in it.  Such was the supposed zealotry of the locals that Christians could not visit. The London Times special correspondent and Victorian-era explorer and travel writer extraordinaire Walter Harris, author of “The Morocco That Was”, penned the first published account in English of Chefchouen. He posed as a Moorish merchant from Fez and rode in on a donkey all the way from Tangier.

How Chefchaouen got its reputation as a blue city is questionable. The internet does more to obfuscate than clarify the truth. Some claim that Spanish Jewish refugees had a religious tradition of painting their houses blue, but there’s little real historic evidence of that in Andalusia, where the pueblos blancos or white villages are testimony to a different tradition. Others say that the locals washed their exteriors in blue as a way of keeping away insects and mosquitos (I’ve got plenty of first hand proof that it doesn’t work). Still others claim that the blue represents water, from the Mediterranean (which would’ve been at least a day’s journey from this mountain enclave) or from the sparkling pure waters of Ras el Maa, the local river that starts at the waterfalls of the nearby Talassemtane Natural Park.

Believe what you want, this great vintage clip from 1980 shows a whitewashed town with almost no blue visible anywhere, which leads me to think that blue-washed houses were a very minor trend. I suspect it caught on as a fad as Chefchaouen’s fame grew on the tourism circuit. In the words of the late, great Walter Harris, “don’t let the truth get in the way of a good story”.

While Chefchaouen is famous for blue, it has really cultivated a reputation for green. And I’m talking the green. That’s right – Chefchaouen and the surrounding region has the dubious distinction as one of the largest source of cannabis in the world. Cannabis goes back centuries in the Rif and holds a unique place in the Sufi culture of North Africa. The relative tolerance towards hashish smoking confirmed Chefchaouen’s rightful stop along the 1970s Hippy Trail that extended from Kandahar to Ketama. Today, drug use is strictly prohibited in Morocco but you’d never guess that, what with the contact highs you often get on a a simple stroll through Chefchaouen’s sinuous medina. The locals are predictably super laid back and while we can’t officially condone this, you can visit the farms- just do not under any circumstances accept invites from strangers to go on “hash tours”.

While Chefchaouen has been popular as a local tourist destination for a few decades (particularly among the Spanish), international tourism exploded with the advent of Instagram in 2010, giving “hashtag” a whole new meaning here.  Just look on Instagram for #chefchaouen (around 750K posts and rapidly growing) and you get a sense of the town’s over-inflated popularity. In recent years, travellers from every corner of the globe mobbed the picturesque streets on a hunt for their own Instagram trophy. This included so many Asian tourists that this town of 40,000 people boasted three Chinese restaurants to meet the demand.

Relatively unscathed by the virus itself, it’s hard not to think that there is some silver lining to the pandemic which has sharply curbed a tourism invasion that was turning Chefchaouen into a circus. The fact is that in the absence of a better strategy to attract more quality and regenerative tourism to the area, Chefchaouen has felt the impact particularly hard.

My personal history with Chefchaouen goes back to my first ever visit to Morocco in the early 90s. Chefchaouen was my first port of call, and for years afterwards I visited frequently, coming in from Spain (for the hiking, of course).  So I had a personal interest in heading up in late September this year to see friends, and have a look around to see how people were coping. It’s plain to see that many businesses, tenuous at best before the pandemic, sorely miss the instagrammers and the meagre tourist dollars they leave behind. But the mountain walking and fresh air remain as delicious as ever, and in a post-Covid future of travel to Chefchaouen, I hope that they will be the main attractions for the trek to get here. Put away the smartphone for an afternoon, stay a little longer, and chat with the locals, and you may just find that it is the people and the history of the region that make Chefchaouen worthwhile, regardless of your preferred shade of blue.

Sebastian swears up and down that any visits to the hashish farms of Chefchaouen was purely for research purposes.  Feel free to reach out to him for trip planning when Covid19 has receded in Morocco and there are blue skies ahead.

While Chefchaouen's famous for blue, it has really cultivated a reputation for green 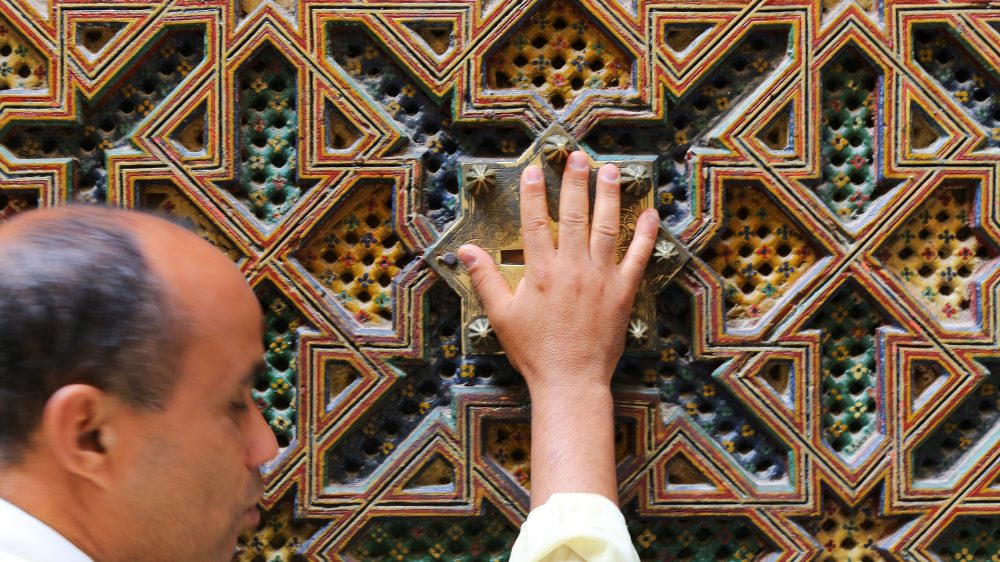