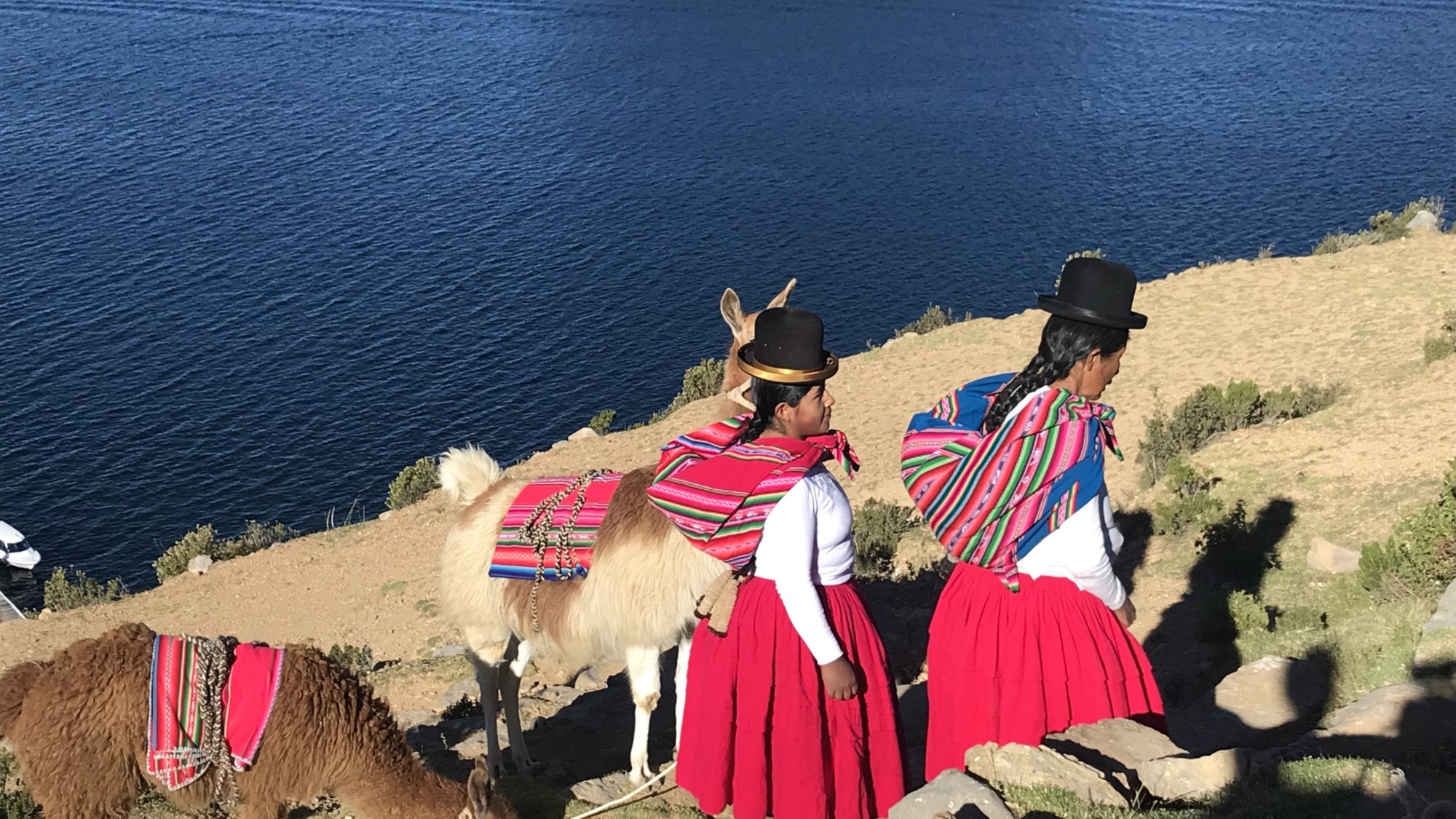 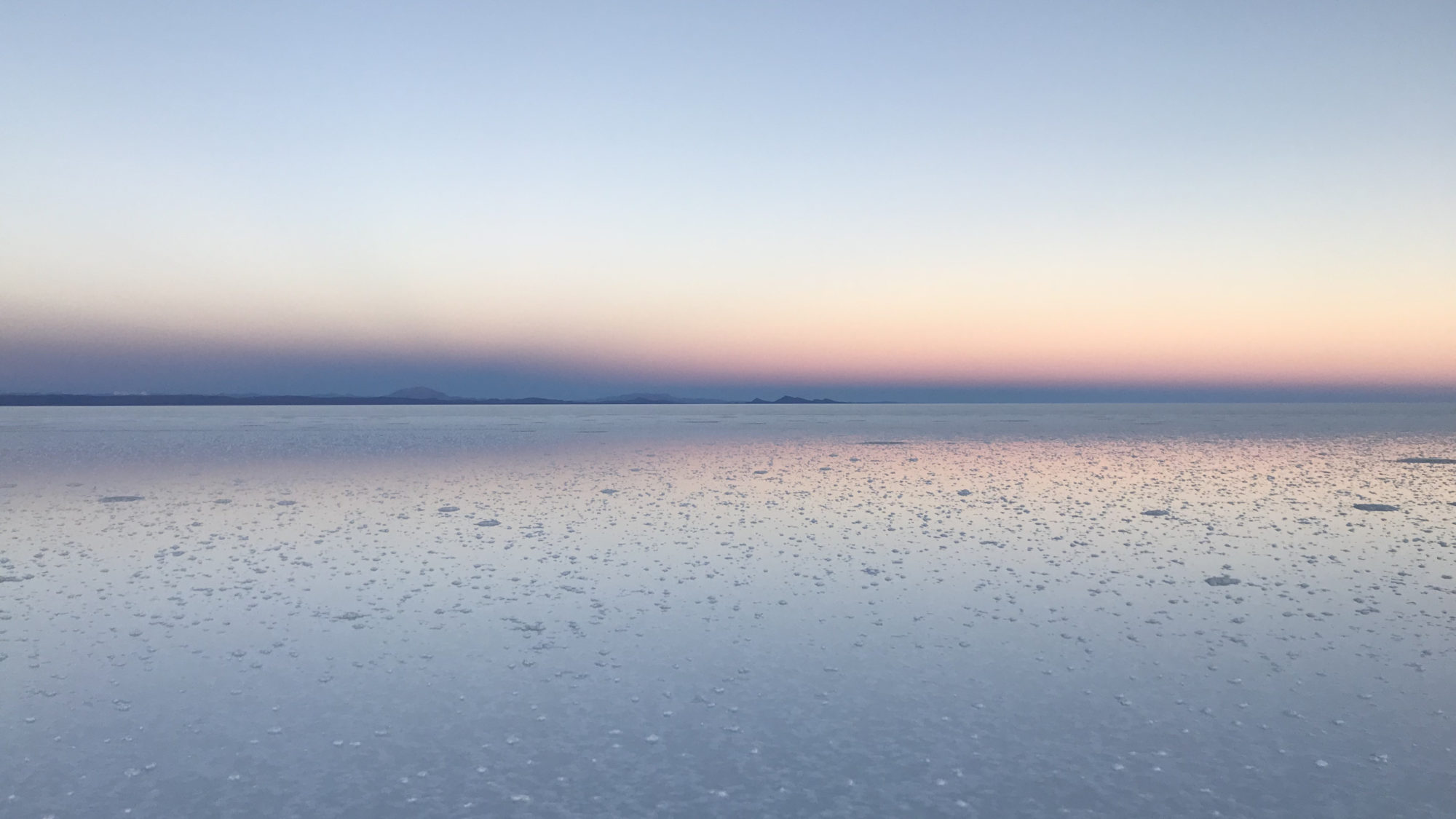 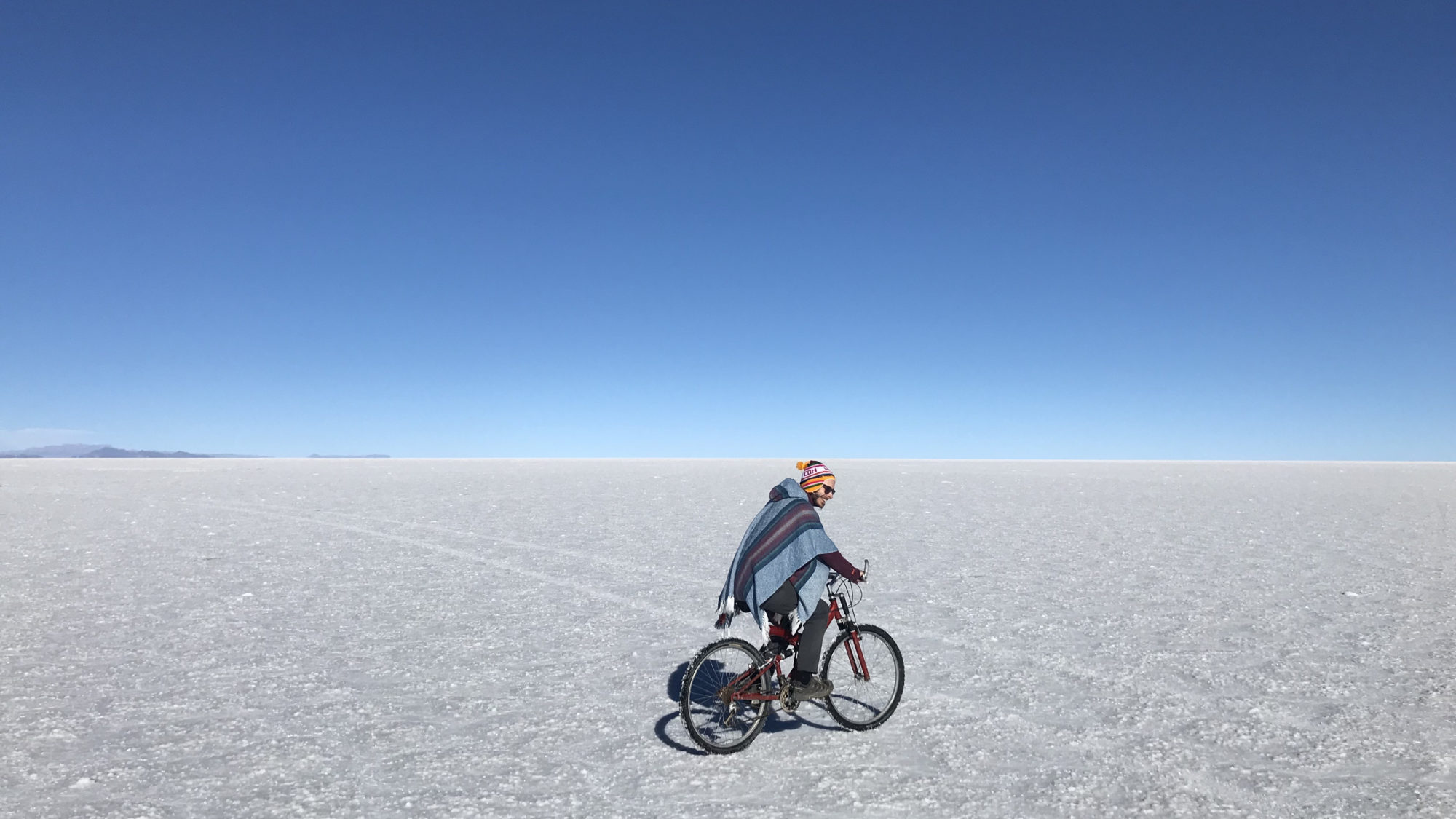 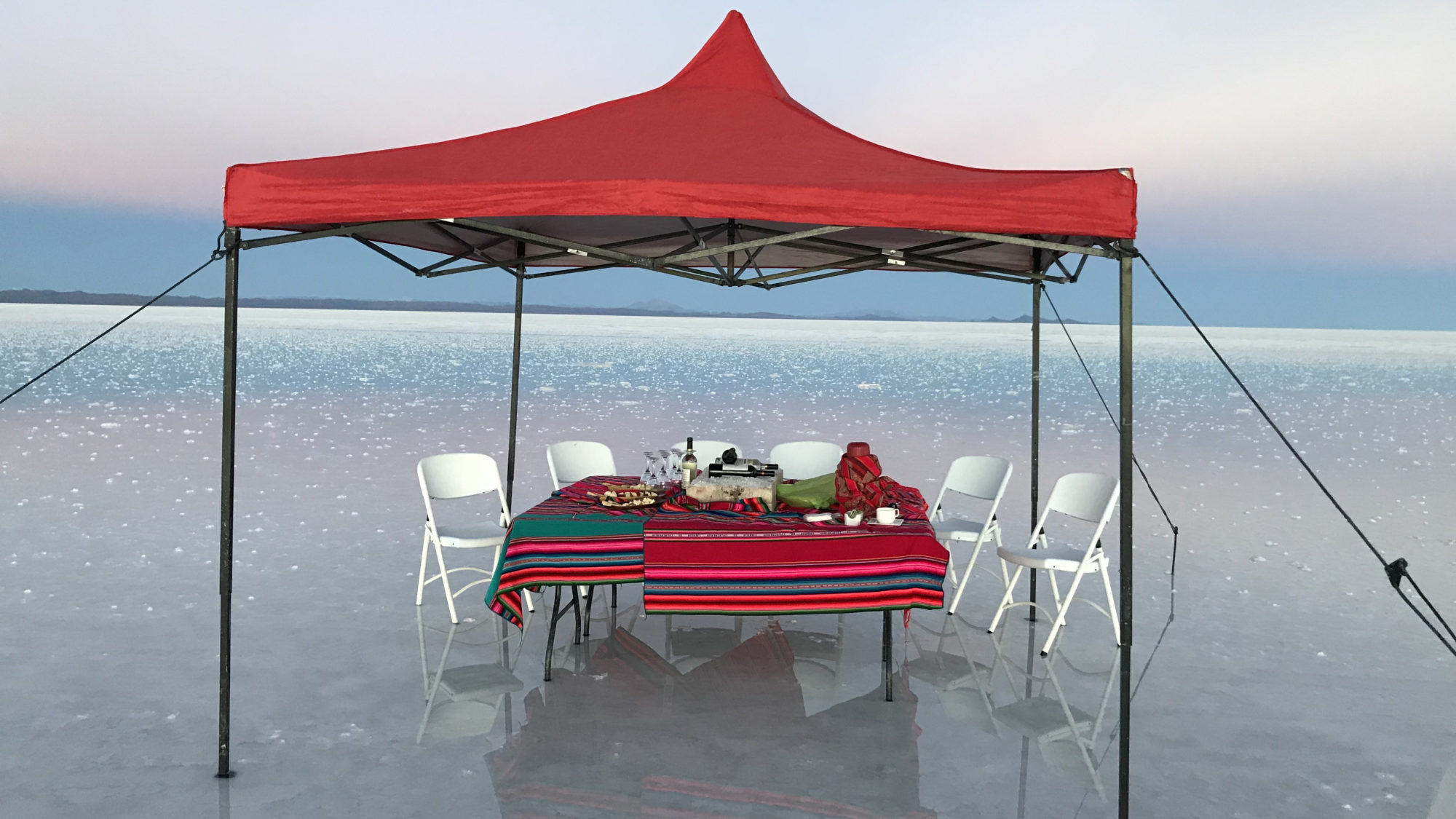 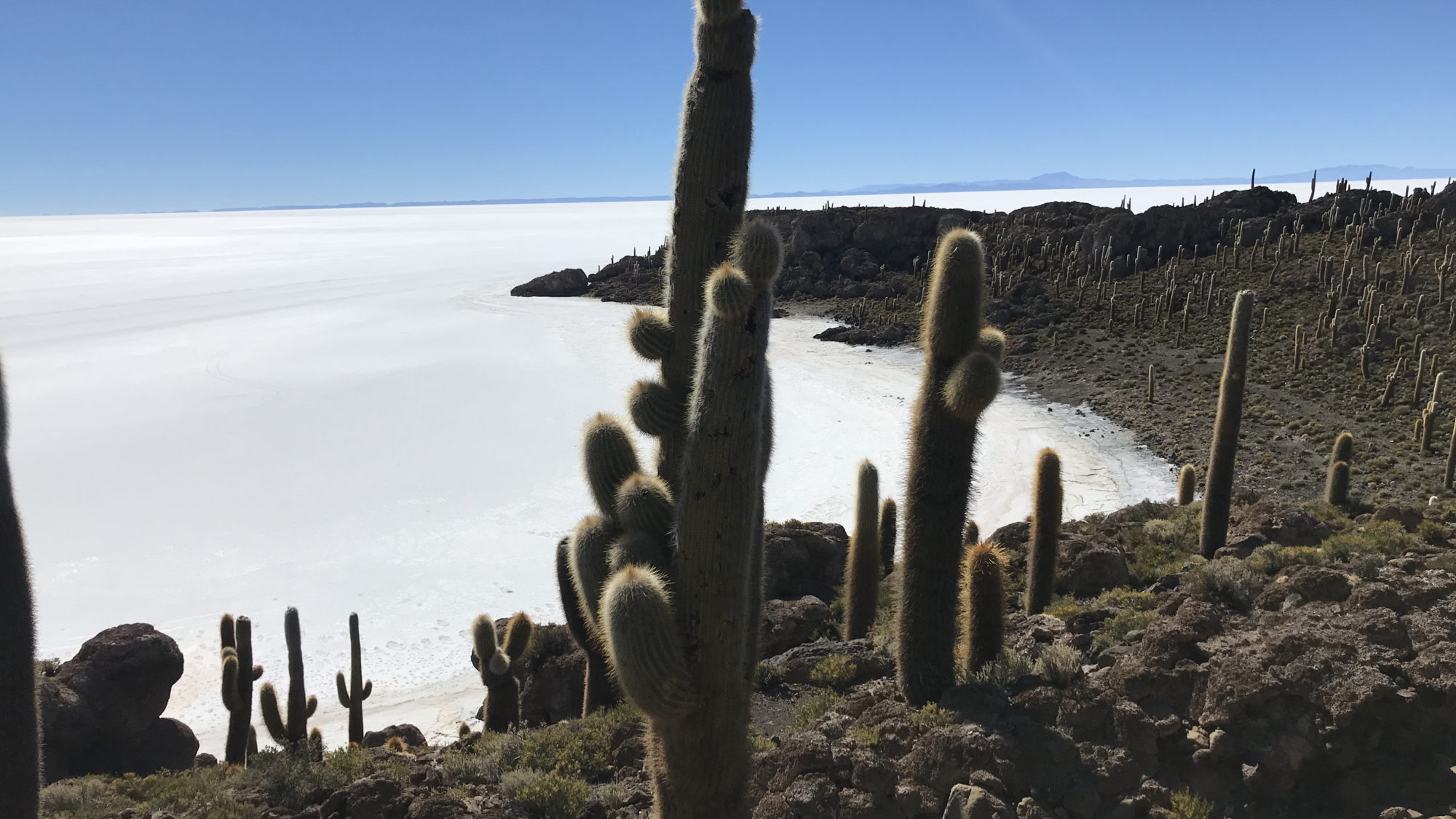 Cactus on one of the islands in the salt
Photography: Anton Lynch 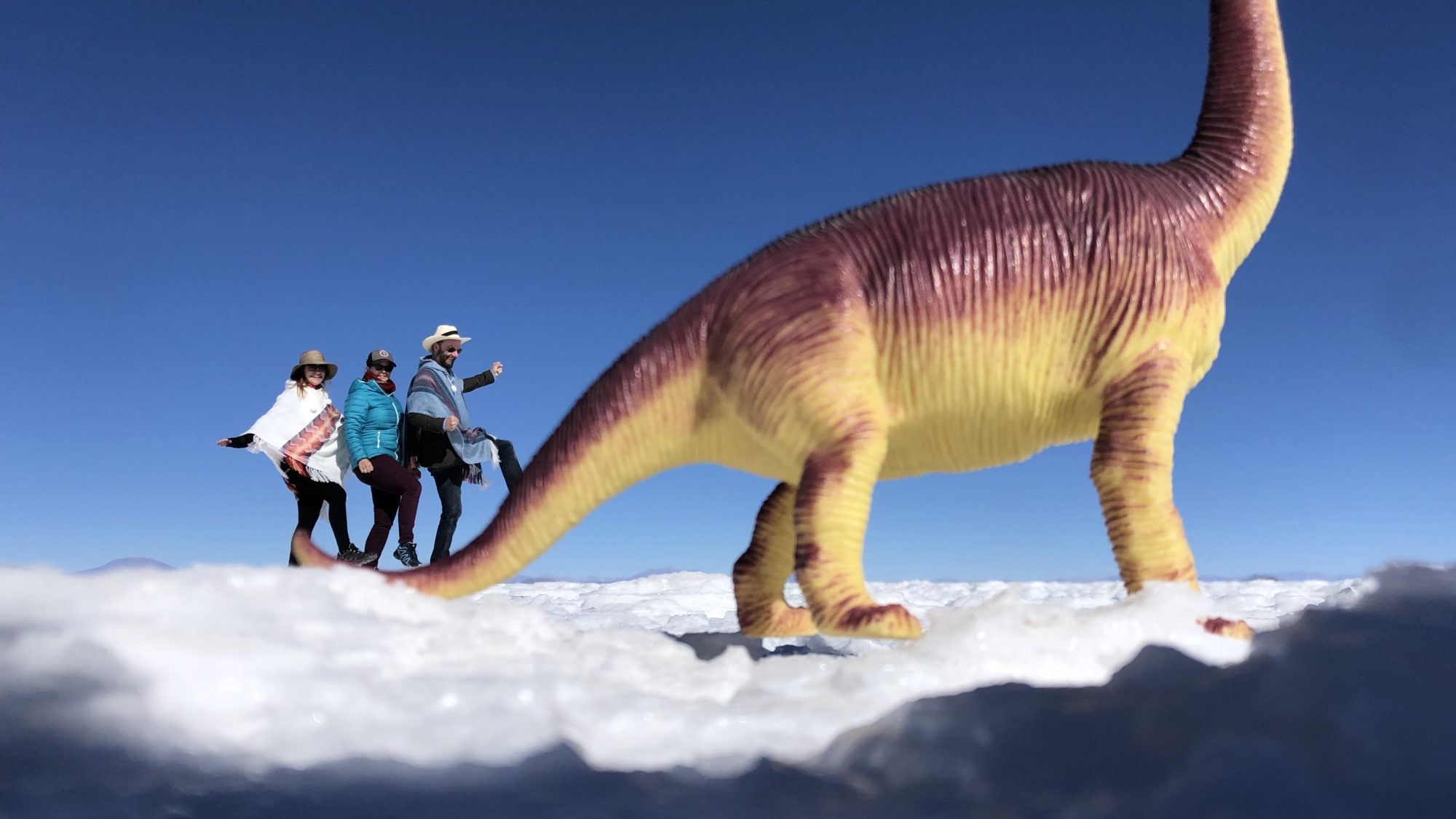 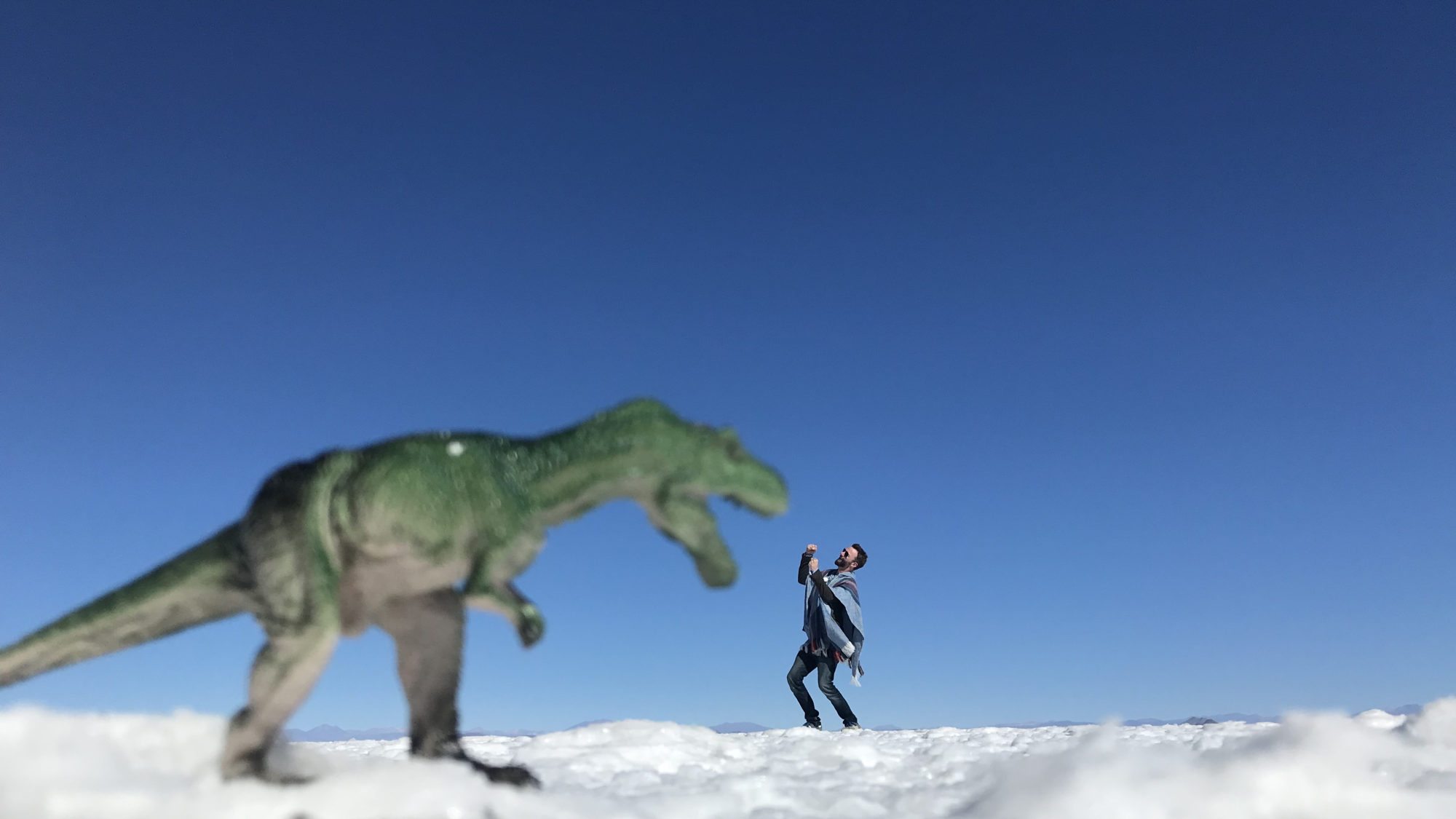 Anton fighting a dinosaur to save the world
Photography: Anton Lynch 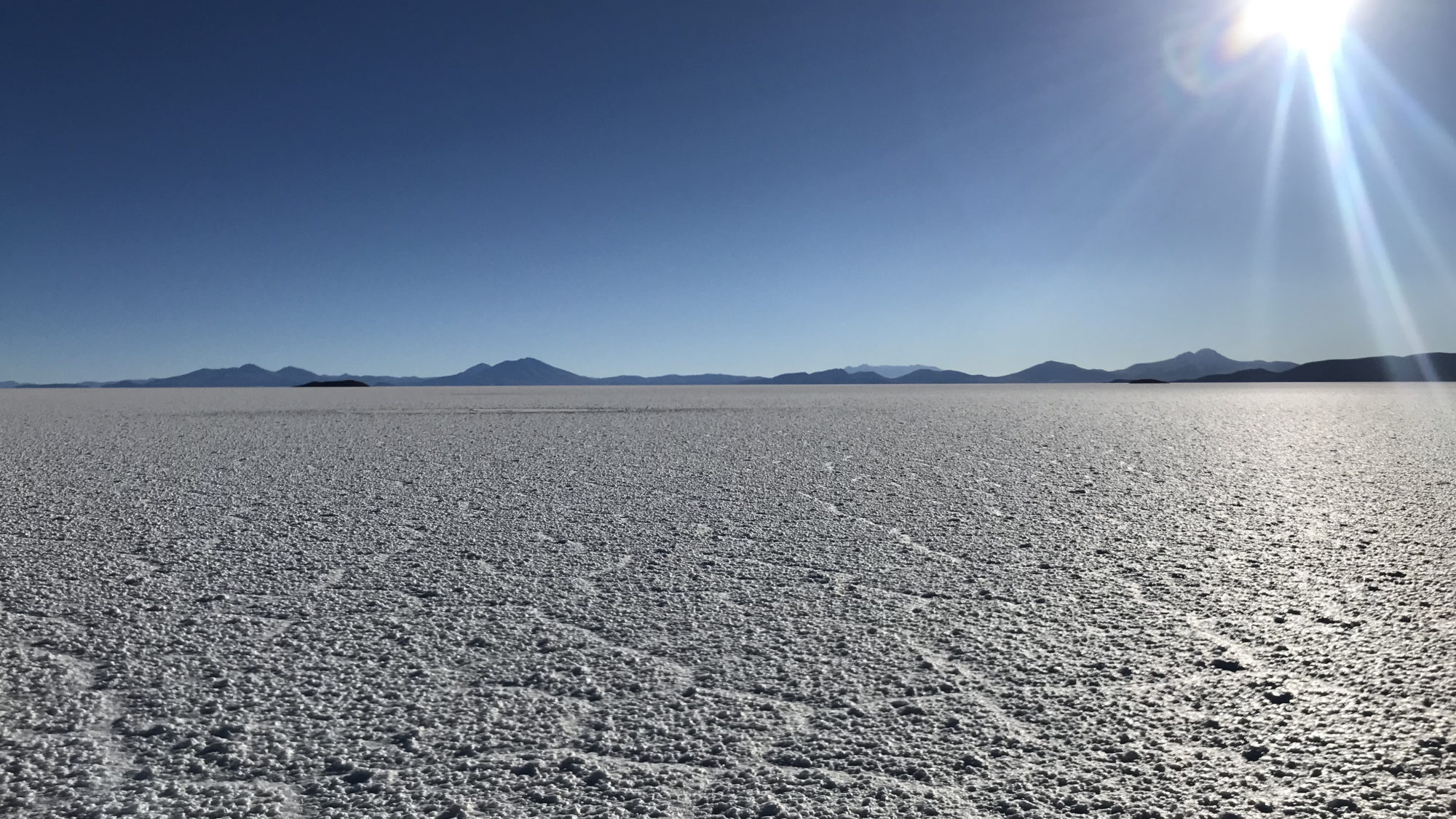 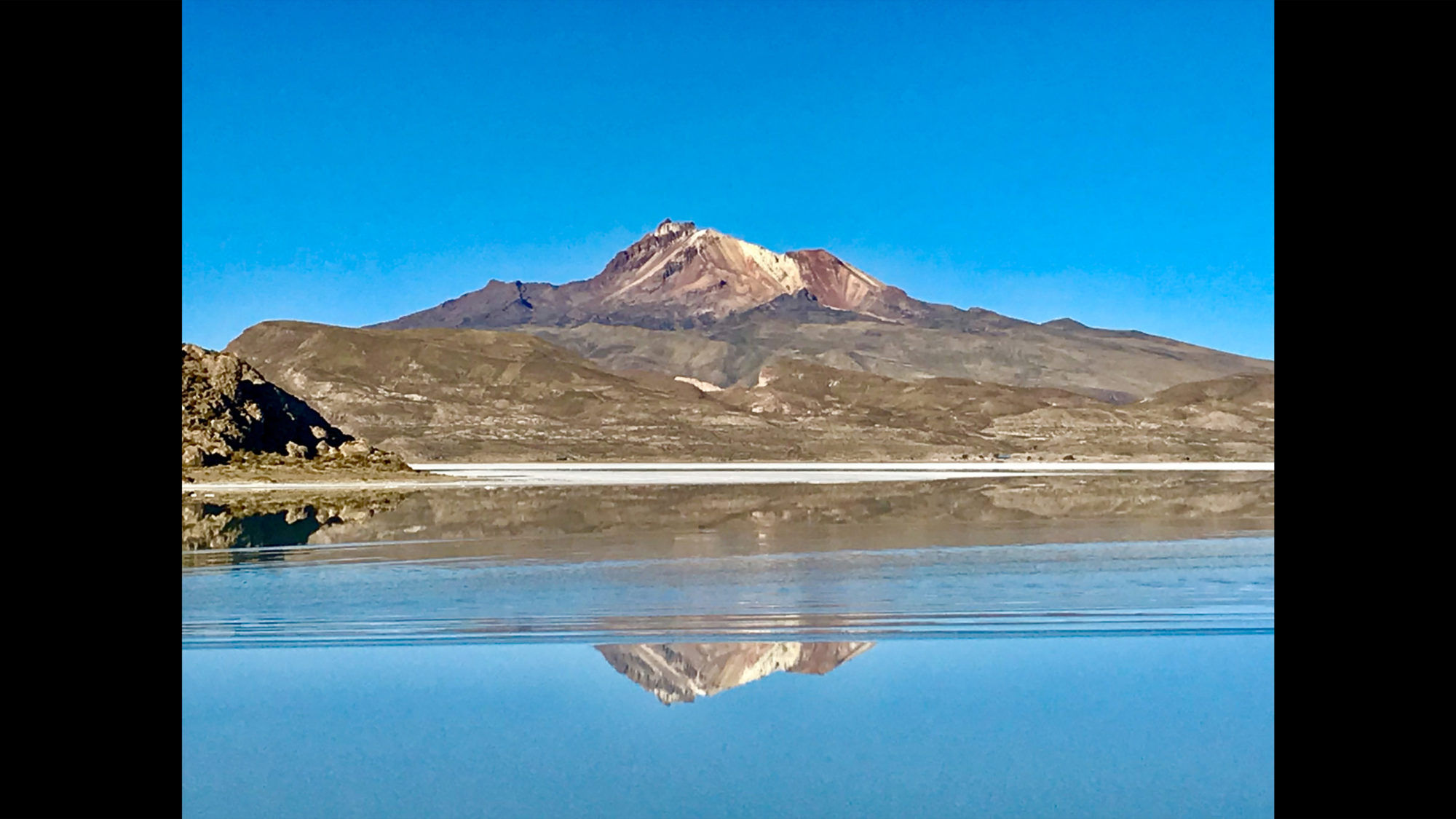 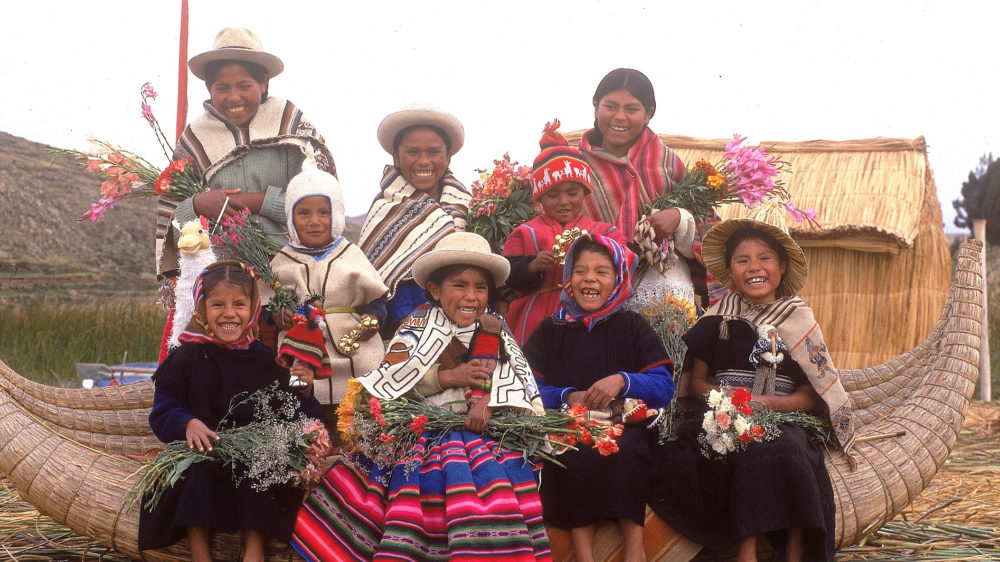 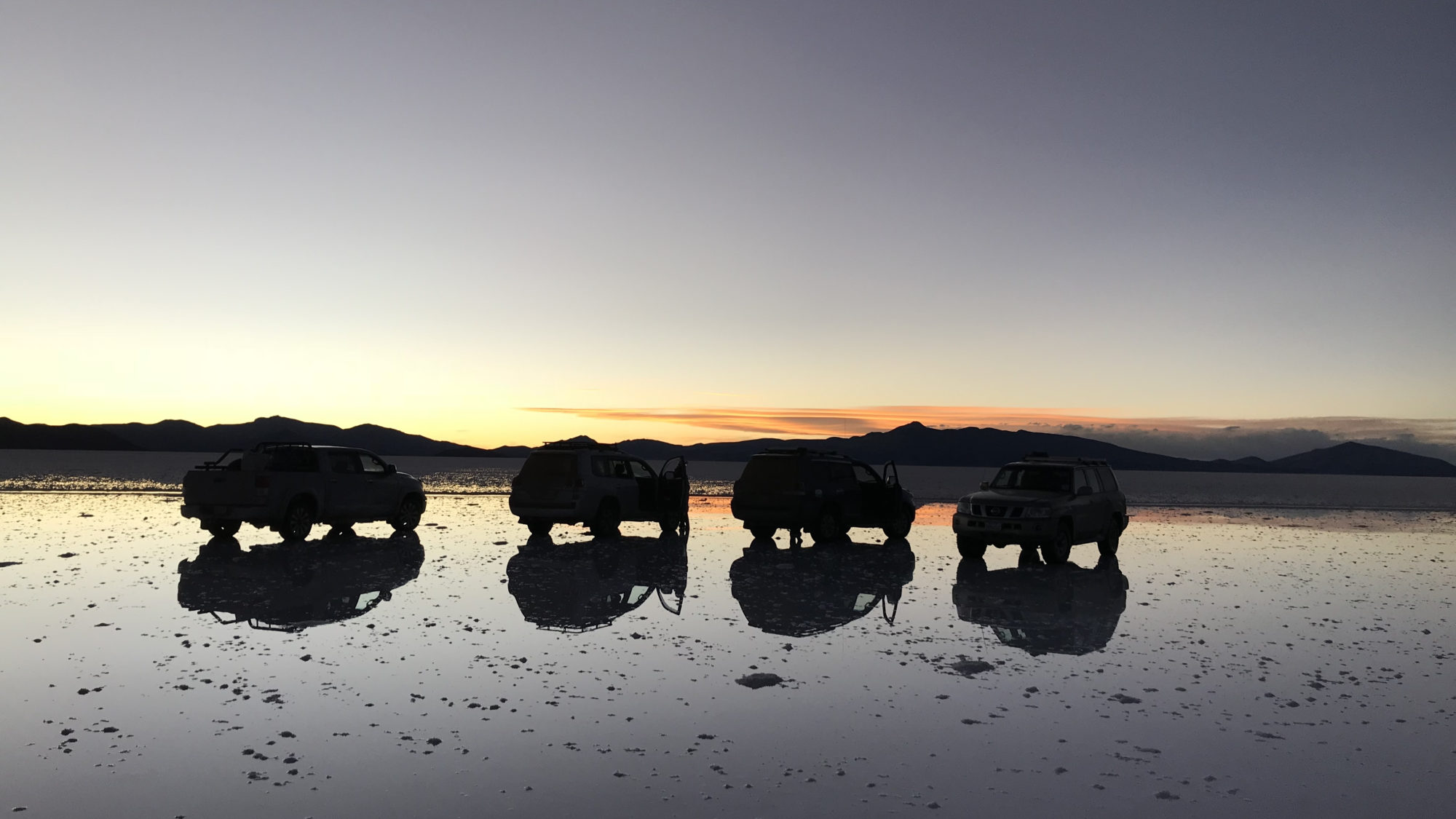 Traversing the terrain must be done in properly equipped vehicles
Photography: Anton Lynch 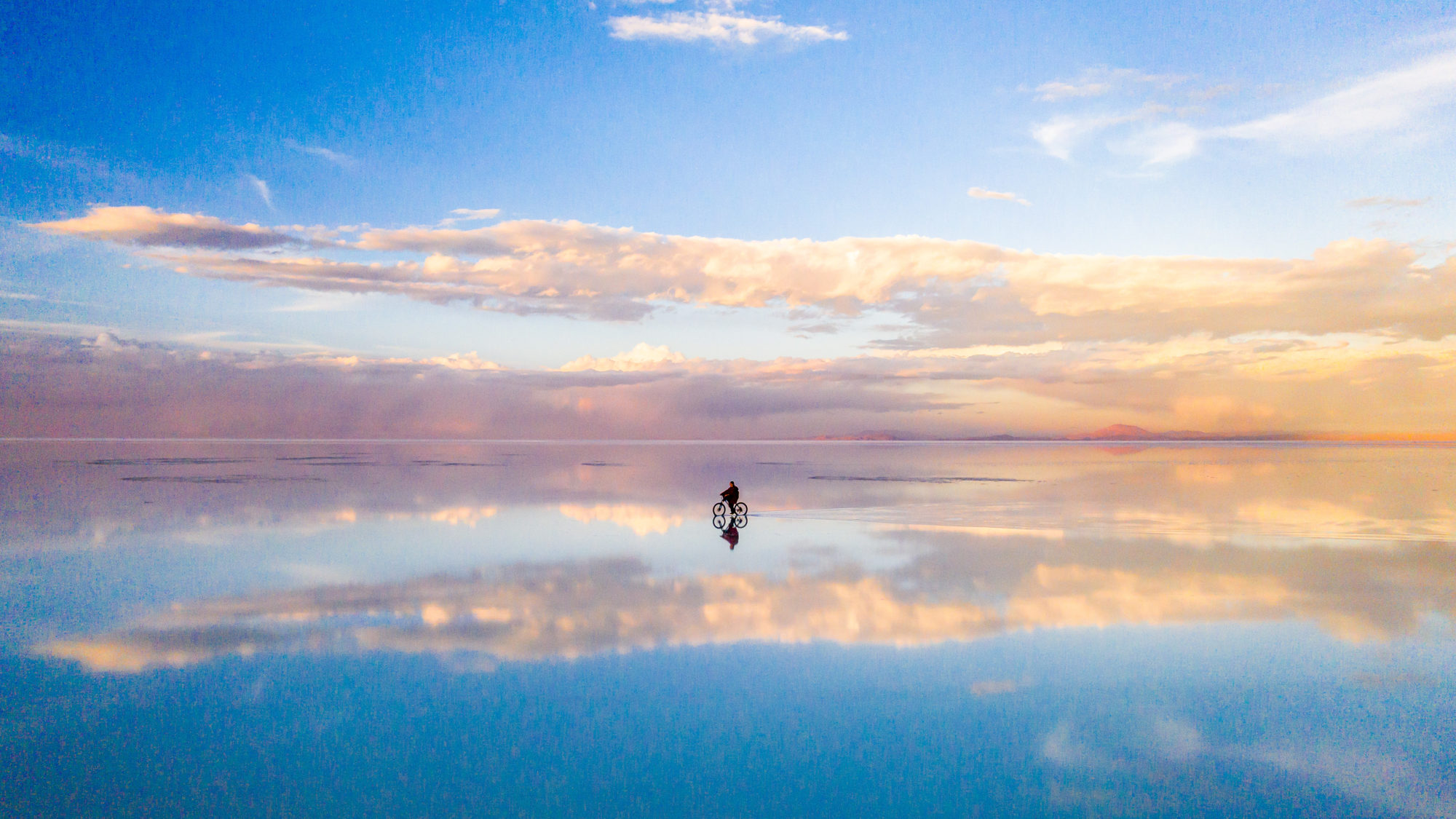 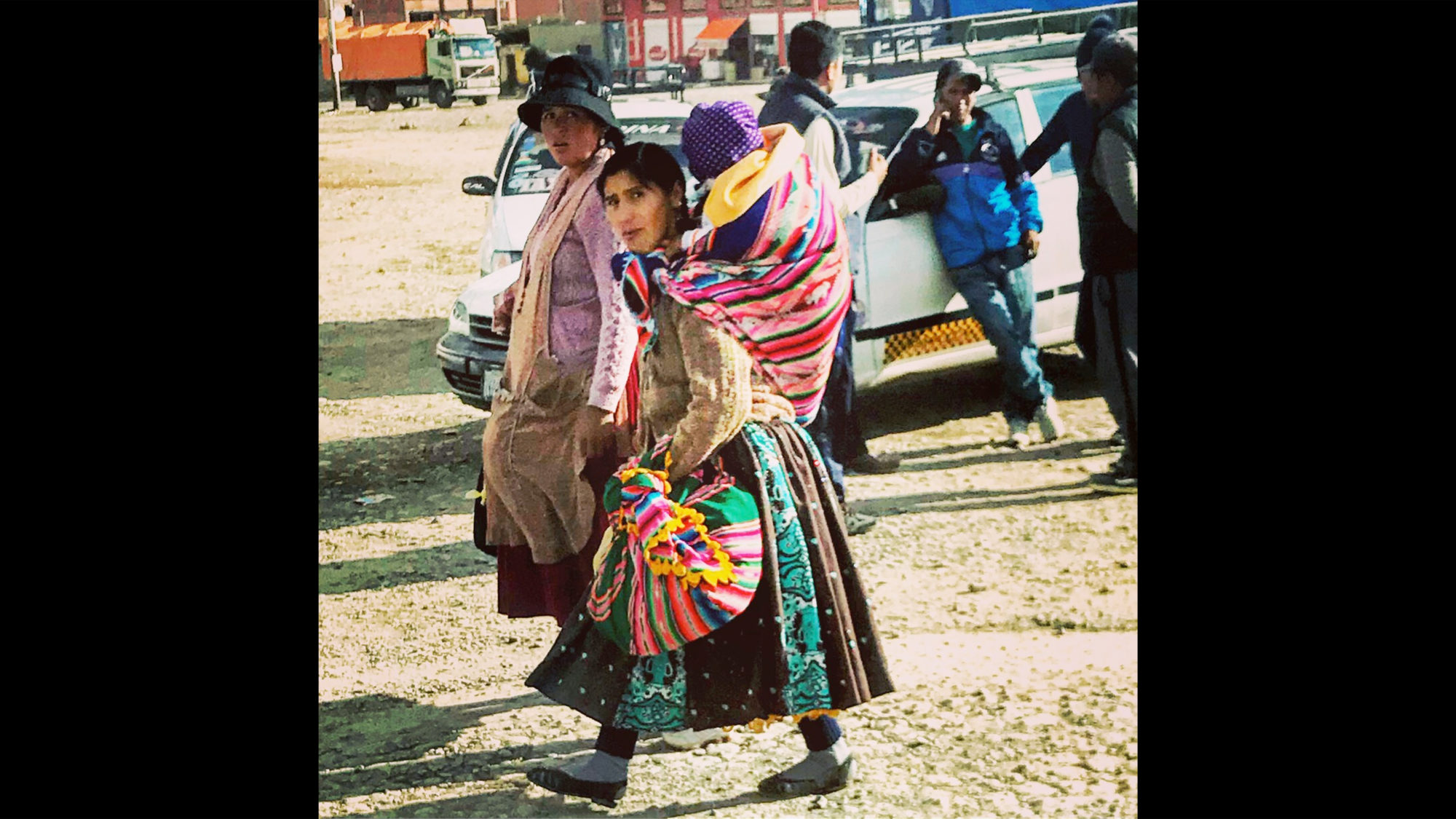 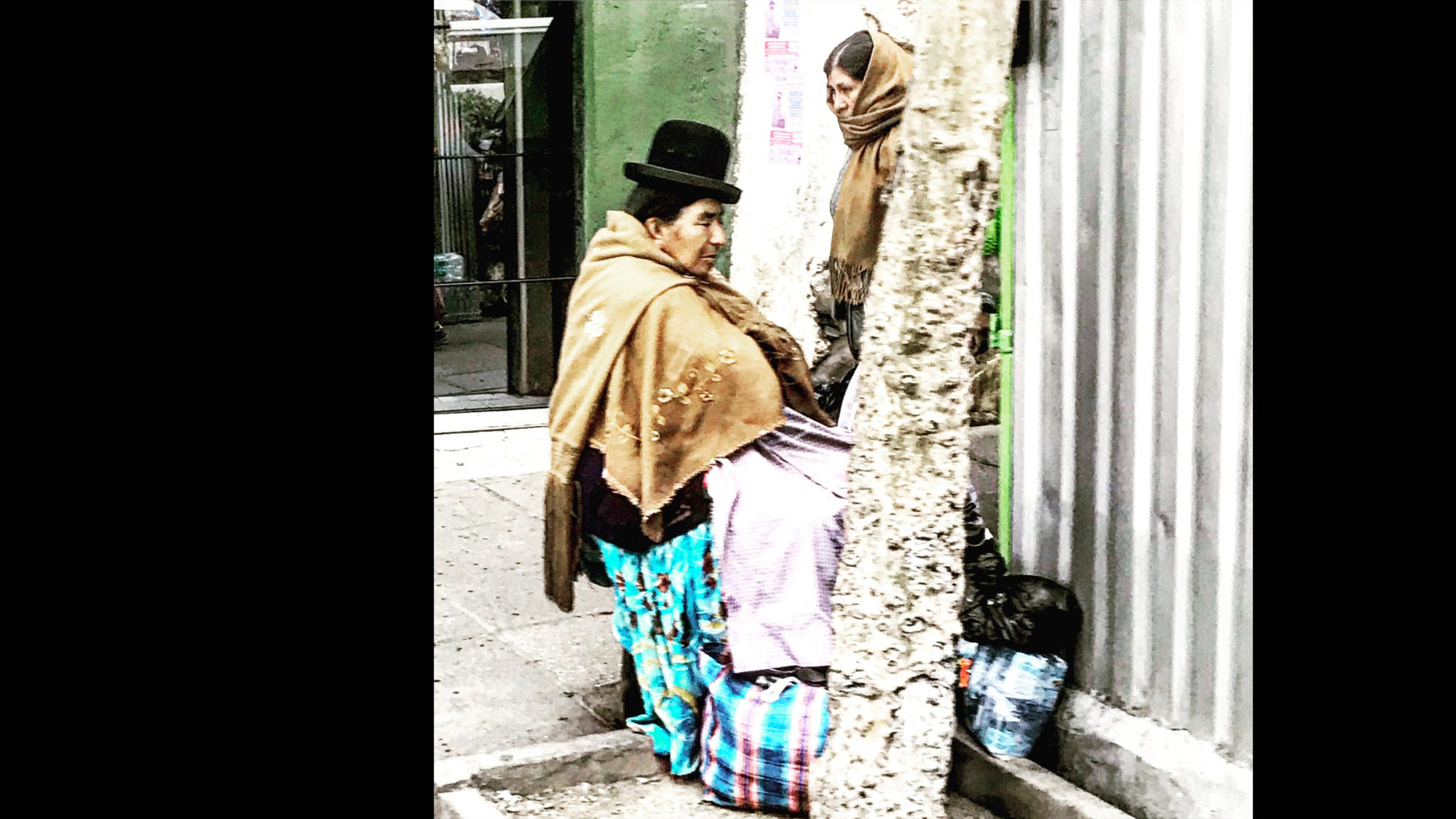 I am not a person who wears a hat well. Top-hat or touk, I’ve never been able to quite pull it off. I envy those boys looking beatific in a beret, languidly posing in a Parisian cafe smoking Gauloises. I am not a milliner’s delight. When behatted, I tend to look a little like a dunce – not a good look.

In stark contrast to this, the cholitas of Bolivia pull it off effortlessly and with style. Images of the cholitas are arguably famous worldwide now (and have graced the covers of many a fashion magazine). This wasn’t always the case. Aymara and Quechua women in traditional dress were often discriminated against and not allowed in certain establishments, owing to them being seen as lower class. The outfits worn by the cholitas consisted of the bowler hat and layered, colourful skirts and shawls. Often a child or infant would be carried almost hidden in the folds of these many-hued hems.

I love the story of how these bowler hats came to be in Bolivia (not by boat). They originally came from Manchester, England and were exported to the railway workers in Bolivia. But they were too small to fit, and so were then sold to the women of Bolivia with the claim that they were all the rage in Europe – and lo, they became popular and all the rage in this landlocked destination, where the tradition has flourished ever since. What I particularly like in Bolivia, is how they are in stark contrast to the mammoth, gargantuan, humongous white of the salt-flats that seem to go on forever. It is like the cholitas‘ colours are a response to the vast, bleak, gleaming, neverending whiteness. (For Star Wars fans the salt flats are the setting for the epic battle on Planet Crait in “The Last Jedi” –billed fittingly as a barren world covered in salt)

The otherworldliness of the salt flats is something to be experienced. It is akin to how it must feel being on another planet (I am guessing, not having yet made it to Mars). There is something alien and remote to it, a harshness and a kind of relentlessness that could easily make you think you are going mad, should you spend too much time there. I suspect this is also because it is at such high altitude (approx 12,000 feet, 3,700m) so the thinness of the air can get to you. Sending you dottily doolally. A few facts:

One of the unexpected joys of the salt flats is how photogenic they are (instagramable for the millennials). When they have the film of water upon them, the mirror-like effect is quite startling, but it is the playing with perspective that makes it fun for all the family. Because it is so damn large and flat and endless it is the perfect setting for perspective-defying fotitos

The stillness of the salt flats and their strange unyielding monotony is the antithesis of the colourful, multi-layered, brightly-hued cholitas. The contrast could not be more pronounced, and I cannot help think the latter was a response to the former (along with the Mancunian influence of course). The contrast between landscape and fashion, nature and nurture, and the historical background around the hats. There seems to be a sense of cultural pride and social empowerment in wearing such an item that originally was not intended for them, but turning it into something so distinctly theirs at this point. These women belong to a lunar landscape, which can be alienating…and their reaction to it is to spinal tap the colour knob up to eleven. Pure poetry in the form of woven stripes and blocks.

The stillness of the salt flats and their strange unyielding monotony is the antithesis of the colourful, multi-layered, brightly-hued cholitas.