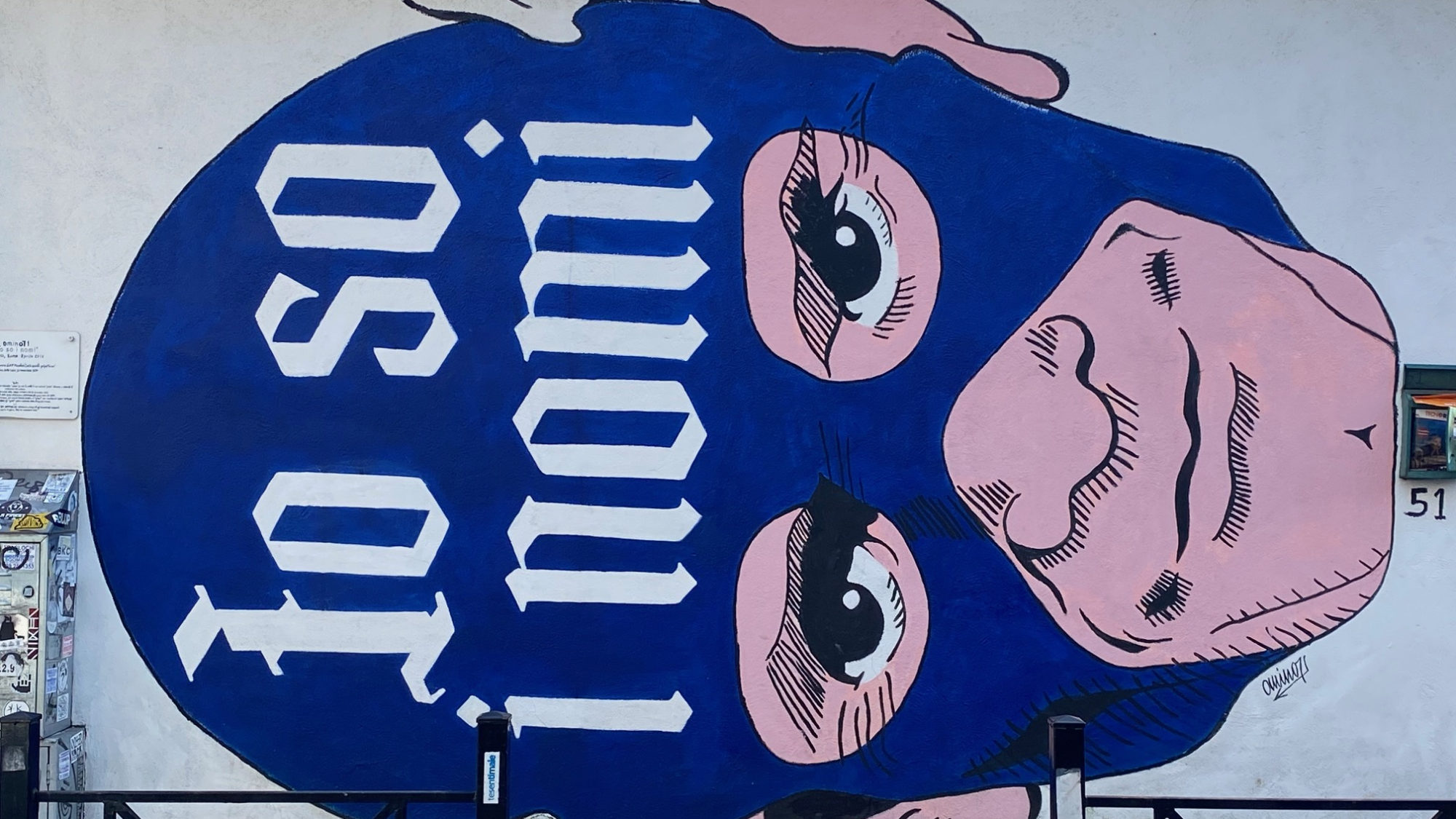 Pasolini appeared on a wall in Pigneto as a superhero, with a winged mask
Photography: Luisa Grigoletto 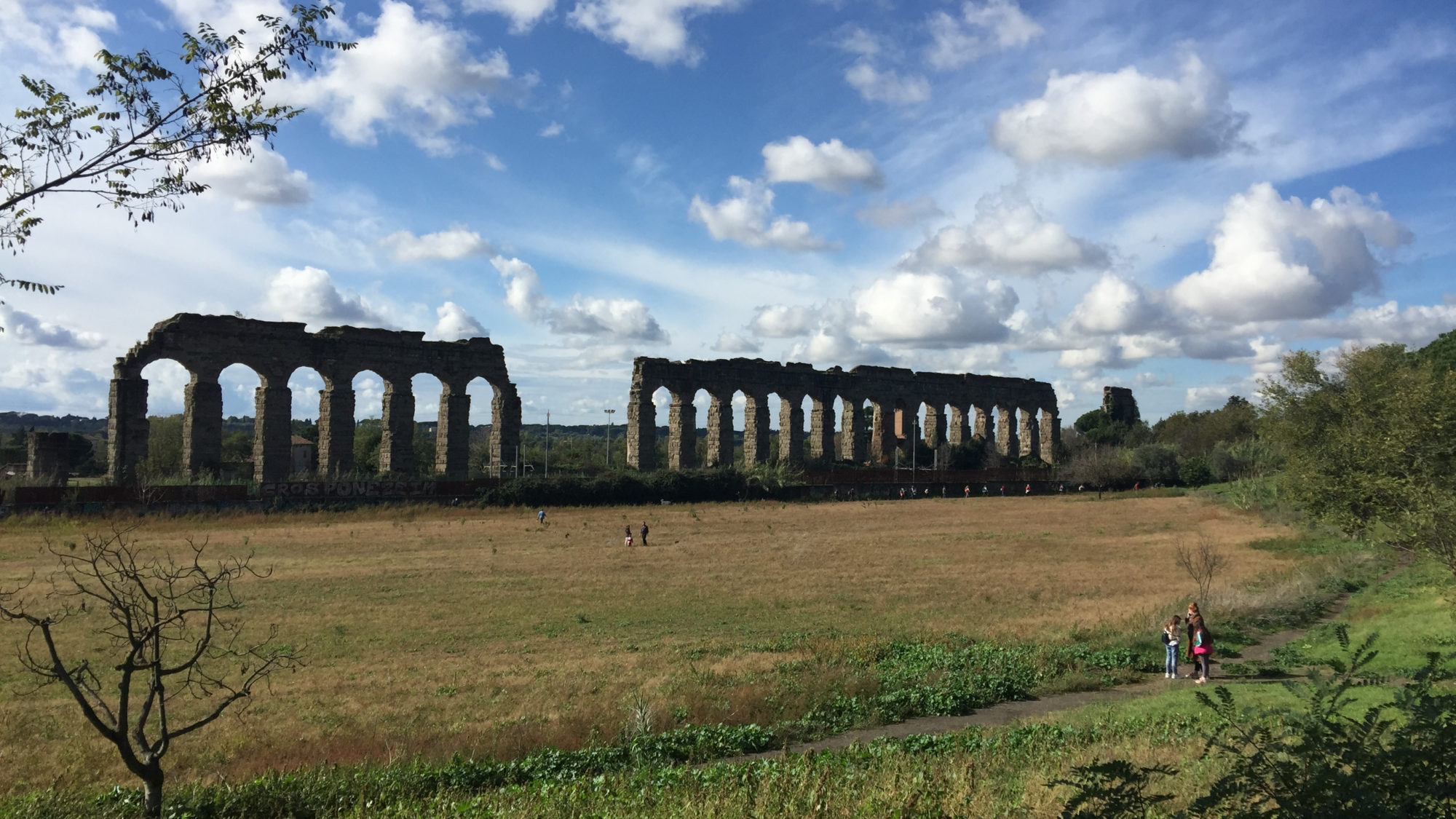 The grandiose ruins of the aqueducts in Rome's suburbs
Photography: Luisa Grigoletto 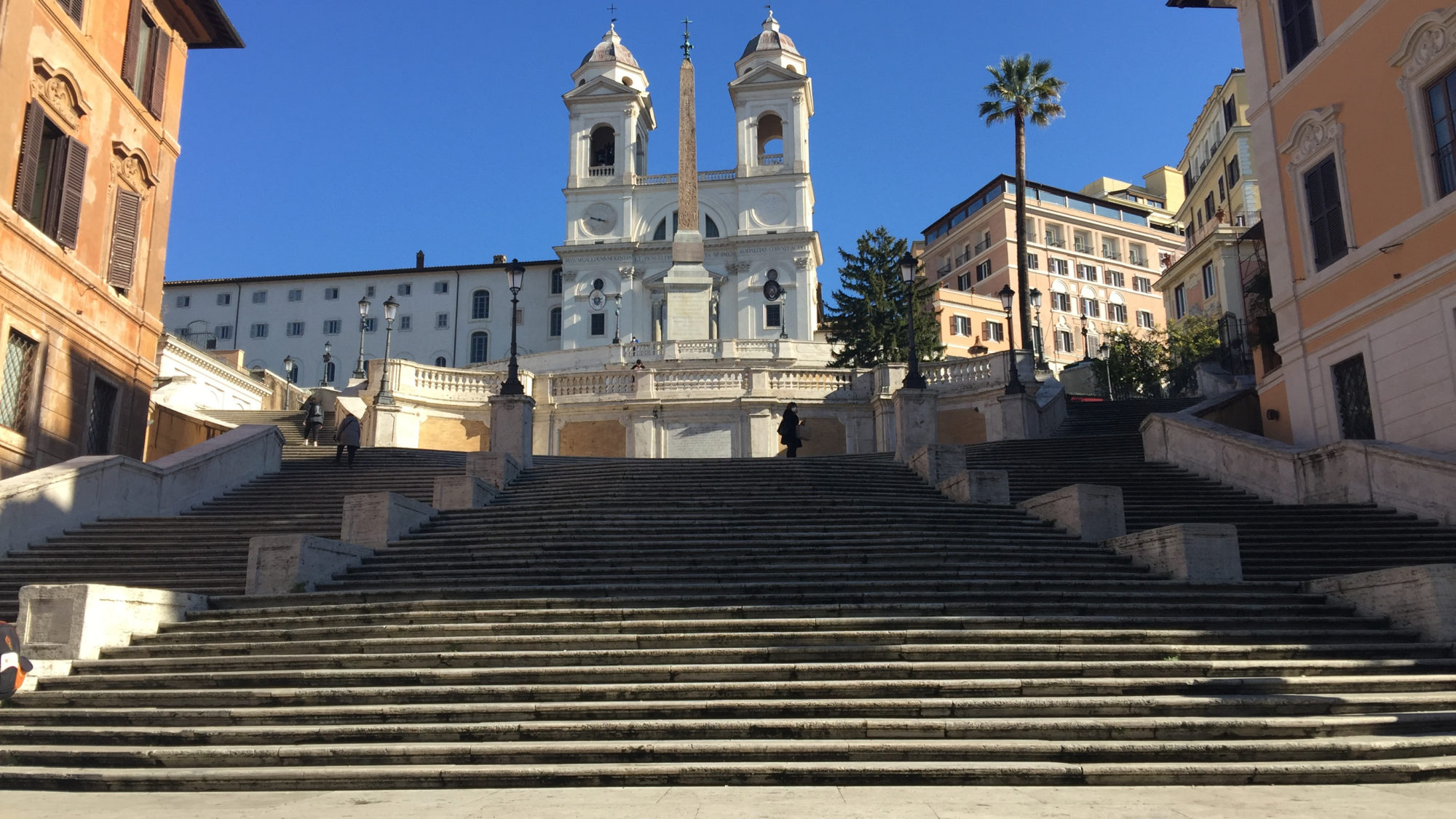 These days, in strict lockdown, even the Spanish Steps look like an empty movie set
Photography: Luisa Grigoletto 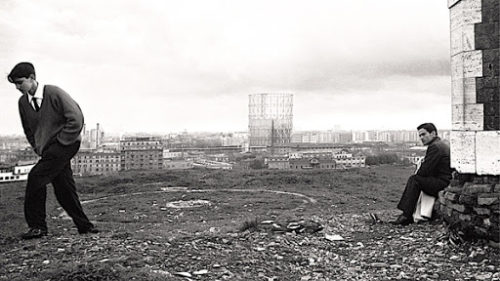 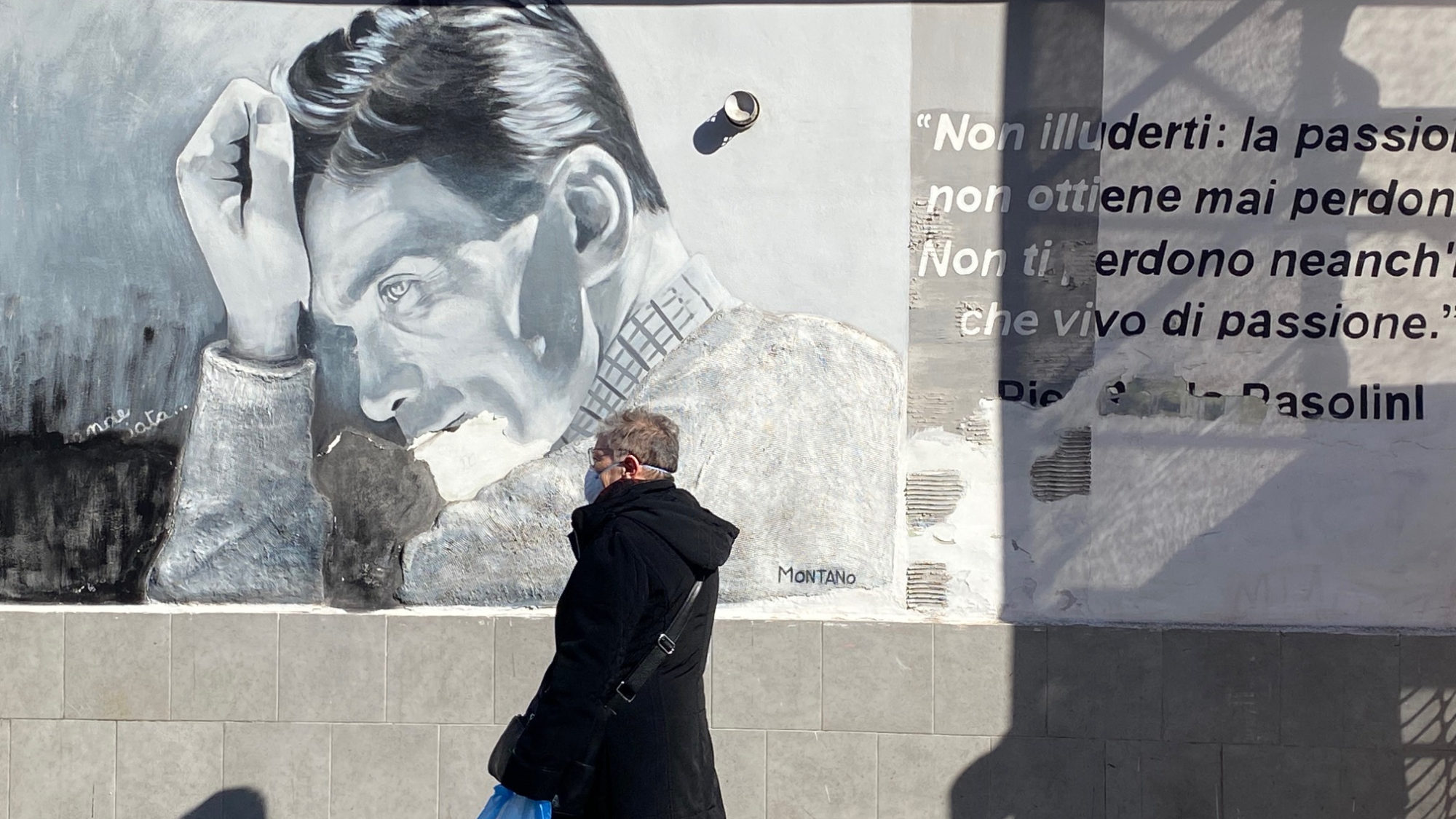 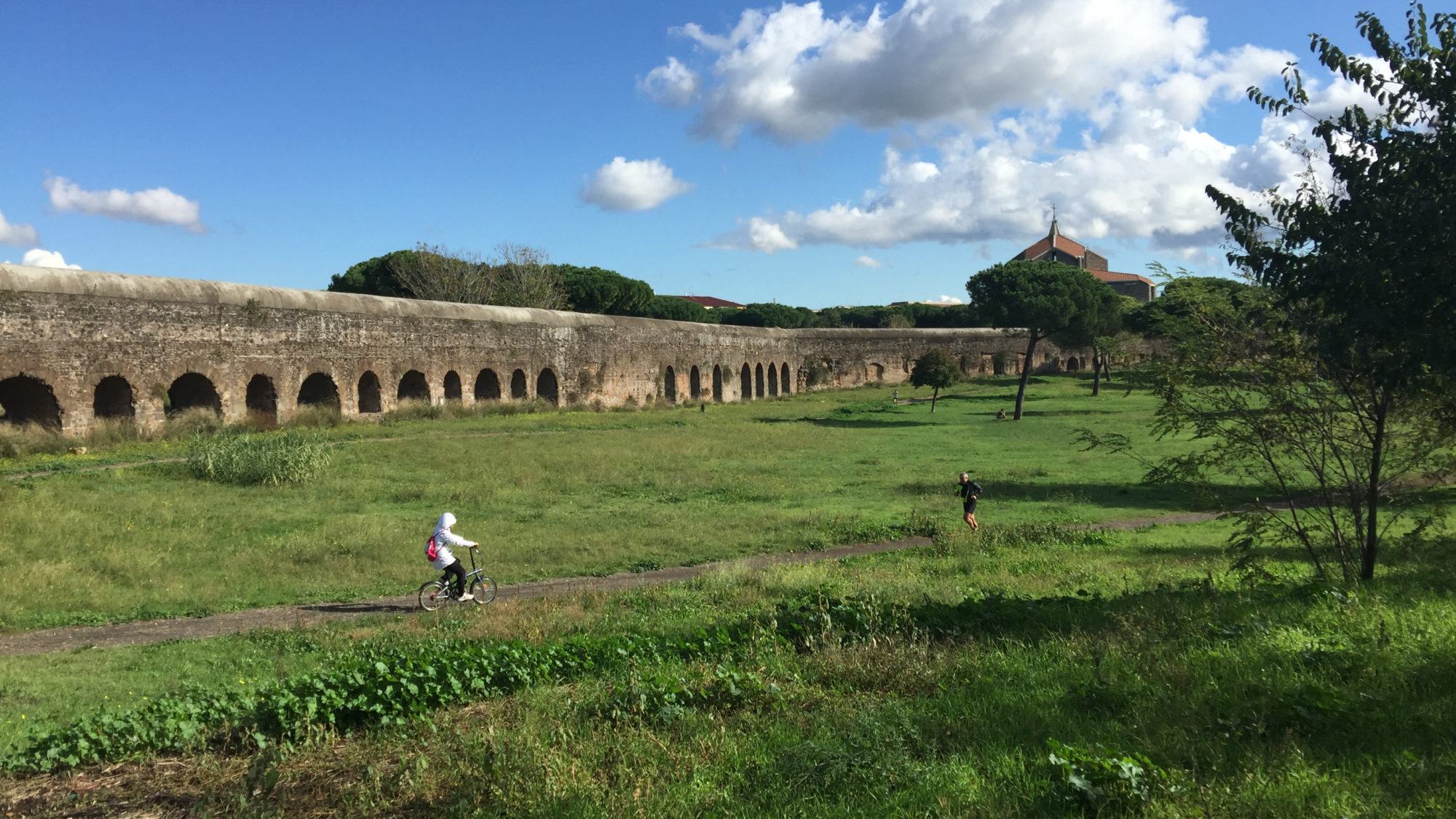 Away from the madding crowd at the park of the aqueducts in Rome's suburbs
Photography: Luisa Grigoletto 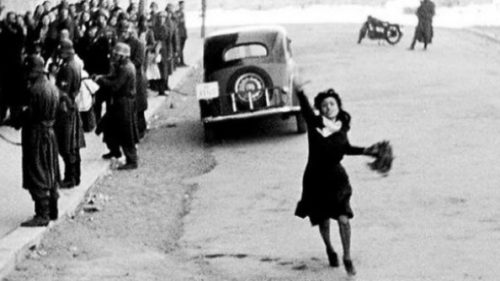 One of the most iconic images from Rossellini's Rome Open City, where Anna Magnani gets shot in Pigneto
Photography: Luisa Grigoletto 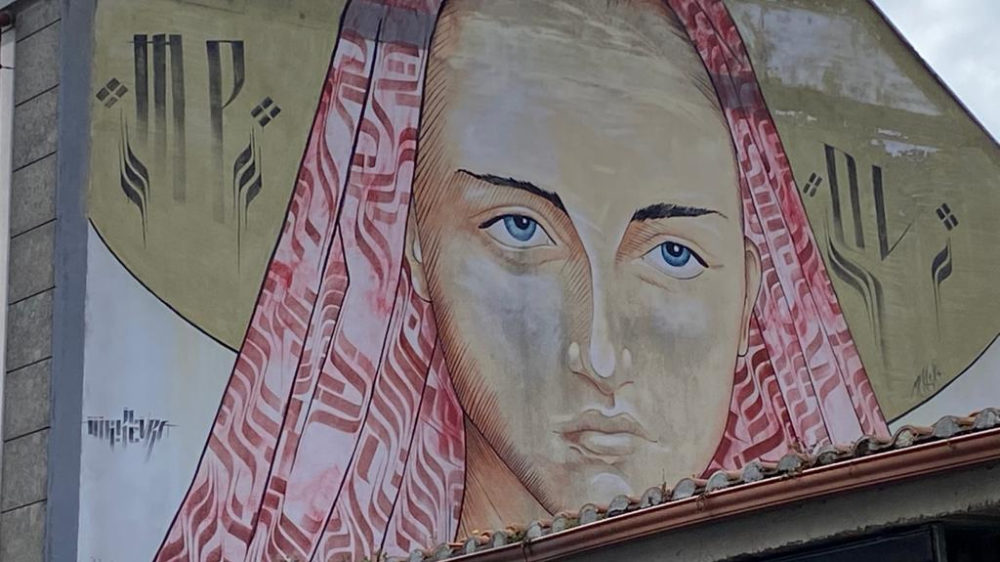 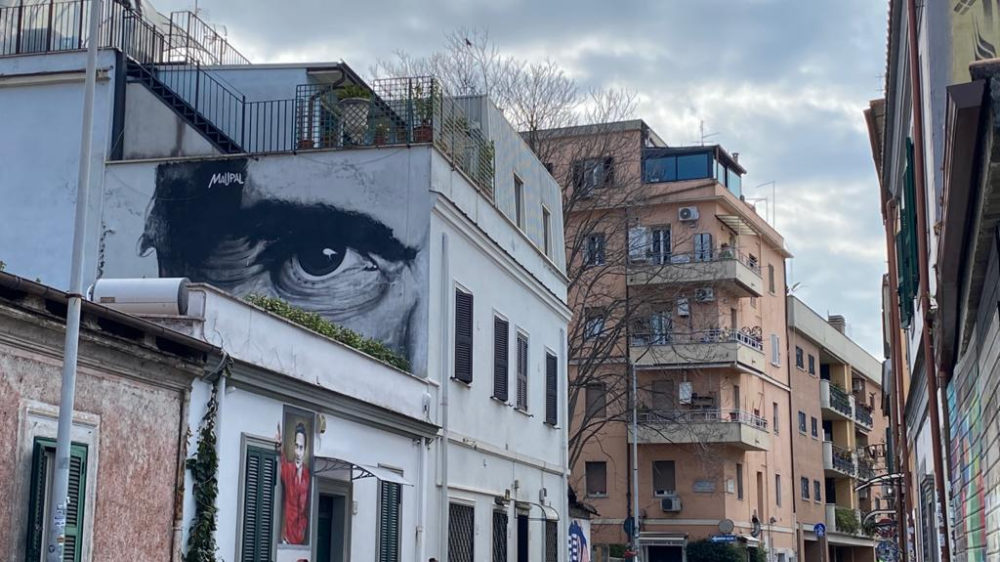 Pasolini's eye (by MAUPAL) is watching you
Photography: Luisa Grigoletto

Since the invention of filmmaking, Rome has been unmatched as the ideal open-air set. The opulent palazzos, lively squares and ancient ruins combine with Europe’s biggest studios in Cinecittà, to provide the perfect backdrop to thousands of productions, national and international. And the image of Rome and the Romans that emerges from these films is complex and multifaceted, in keeping with the tumultuosity of the city, its unique history of kings, emperors, popes, and dictators, and its equally disorderly present.

The same cannot be said about the way the travel industry views Rome – or at least the way it tries to sell it. Tourism brochures and websites give us instead a rosy string of platitudes and a medley of the usual big hitters, from the Colosseum to the Vatican, and from the Spanish Steps to Piazza Navona.

Of course, Italian cinema has its own collection of stereotypes: the undiscovered opera singer talent, the insatiable womanizer and the curvaceous bombshell, the paparazzi, the omnipresent pizza and pasta, the Vespa ride through the city centre, the loud Italians at the bar sipping coffee (hang on, wait, that one is definitely real). As the relationship between cinema and tourism gets closer, so the stereotypes increase. Wondering what movies I might be thinking of? I’d ascribe to this list films such as Woody Allen’s “To Rome with Love“, Ryan Murphy’s “Eat Pray Love“, or the much beloved “Roman Holiday” by William Wyler — all of which can make for some fun, light entertainment (and let’s be honest, we’ve all seen them), but which give us a pretty shallow view of the city.

Instead, let’s stick with the Vespa ride and see how far from the stereotype that same trope can take us, in Nanni Moretti’s first episode in Caro Diario, where he shows us a Rome that’s anything but iconic, yet filled with poetic images of the suburbs. It’s the furthest from a postcard-like depiction of the city, something very personal and intimate, filled with his own memories, emotions, dreams, aspirations, and new revelations. “What I like the most when I am riding my Vespa is looking at houses and neighborhoods, and the neighborhood I like the most is Garbatella” (a popular neighborhood in Southern Rome) “and I like to stop and look at penthouses where I’d like to live… I imagine renovating these apartments that no one will ever sell”, he says in the movie. He goes from the Foro Italico to the Villaggio Olimpico, and from Tufello to Vigne Nuove, to Monteverde. His peregrinations include also wandering through places he’s never been to before, like Spinaceto, a working-class suburb just outside the GRA, the motorway that encircles Rome, and Casal Palocco, a residential area between the city and the sea. He pays homage to the desolate, semi-abandoned sculpture standing in the spot where the writer, intellectual, and film director Pasolini was killed in Ostia in 1975. This is also Rome, and often it can be surprising for the Romans as well.

Pasolini’s take on the Eternal City was anything but cliched: it was gritty, grim, and edgy, dramatically emphasized by the use of sharp, high-contrast black and white. Rome in the 1960s was rapidly developing and savagely becoming urbanized, with large complexes cropping up left and right. Pasolini selected those areas that still retained a rough, granular quality: simple slums with spirited people. From Accattone to Mamma Roma to The Hawks and the Sparrows, it’s mostly the fringes of the city that serve as a background to a small humanity: Centocelle, Tor Pignattara, Casal Bertone, Quadraro, the Park of the Aqueducts — today a pretty, popular spot for jogging and weekend picnics. Other areas, such as Porta Portese, EUR, Testaccio and Pigneto also feature predominantly in these movies, but have since gentrified, to different degrees. Among them, especially Pigneto, a neighborhood in the Eastern portion of the city, has deep links with the tradition of Neorealist movies, from Luchino Visconti to Vittorio De Sica, from Mario Monicelli to Roberto Rossellini, who filmed here one of the most famous scenes of “Rome, Open City”, in which Anna Magnani gets shot. But Pasolini, who used to refer to this area as “the crown of thorns that encircles the city of God”, has left the longest-lasting mark: here to this day he is considered almost like a superhero. Take a stroll through its narrow streets, and you’ll come across several murals dedicated to the filmmaker. I am not sure how he would feel about this tribute, if he were still alive. The neighbourhood is still rough around the edges, but talk about stereotyping…

Another noteworthy example of minor stories that nevertheless contribute to painting a more complex bigger picture is Gianfranco Rosi’s Sacro Gra, the first documentary ever to win the Golden Lion at the Venice Film Festival (in 2013). Inspired by Italo Calvino’s Invisible Cities, it shows life along the GRA, the ring-like highway that surrounds Rome. It seems reductive to call it a documentary, since the movie is quite far from your typical example in the genre: it’s as if poetry took over reality so that the powerful marvel and holiness of the ordinary could emerge.

The final scene of Paolo Sorrentino’s The Great Beauty addresses this idea head on: here the protagonist, Jep Gambardella, delivers a monologue where he praises the power of contemplation as a way to find beauty in everything that surrounds us, even in the most unexpected places — the great beauty in the small things:

“This is how it always ends. With death. But first there was life, hidden beneath the blah, blah, blah. It’s all settled beneath the chitter chatter and the noise: silence and sentiment, emotion and fear. The haggard, inconstant flashes of beauty. And then the wretched squalor and miserable humanity. All buried under the cover of the embarrassment of being in the world, blah, blah, blah… Beyond there is what lies beyond. I don’t deal with what lies beyond. Therefore… let this novel begin. After all… it’s just a trick. Yes, it’s just a trick.”

As an Italian, a resident of Rome for over 10 years, and a trip planner, I wish that the imagery often associated with the Eternal City were a bit more articulated and off the grid, even contradictory if you will. Rome is no longer the Hollywood by the Tiber it used to be in the 1950s and 1960s, and the splendour and pomp of Via Veneto is long gone. Rome is not just the historic centre, nor does it end with the Aurelian Walls: it’s a sprawling blob that stretches all the way to the coast, more than 30 km South-West. So here’s to nuances, expanding our horizons and perspectives, to celebrating all those contradictions that are allowed to step up to the limelight and explode in all of their splendour.

Luisa’s love of contradictions is such that she often doesn’t agree with herself. But if you’re up for a cinematic Vespa ride through Rome, with unexpected sights and detours, contact her here.

This is also Rome, and often it can be surprising for the Romans as well.